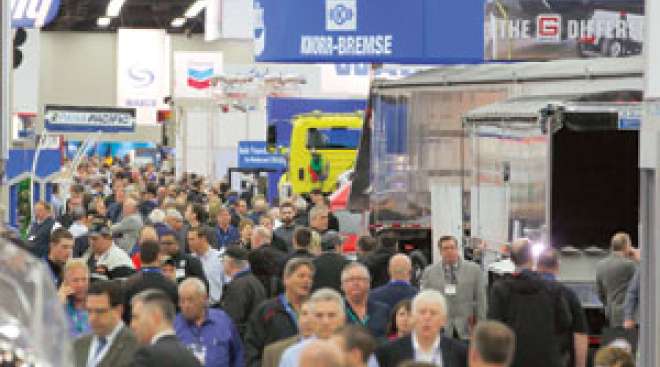 This story appears in the May 25 print edition of Transport Topics.

Several truck and trailer manufacturers said they would prefer to see the annual Mid-America Trucking Show held every other year, echoing Daimler Trucks North America’s recent call for the continent’s largest trucking show to move to a two-year cycle.

Truck and engine manufacturer Navistar Inc. and trailer makers Great Dane Trailers, Utility Trailer Manufacturing Co. and Hyundai Translead said they would favor such a change, but unlike DTNA, none has said it definitely will skip MATS in 2016.

In fact, Utility and Hyundai Translead, as well as engine maker Cummins Inc., already said they are planning to attend next year’s show, scheduled for March 31-April 2.

Earlier this month, DTNA announced it will forgo MATS next year with the intent of returning in 2017 and attending every two years thereafter, alternating with the IAA Commercial Vehicles show held in even-numbered years in Hanover, Germany.

“We haven’t heard from anybody else who’s planning to skip, but we won’t know for sure until we begin the sales process July 15,” said Toby Young, president of Exhibit Management Associates, which owns and operates the show held each year in Louisville, Kentucky.

It’s the goal of the event’s organizers to continue holding the show every year, Young said, but “if there are changes coming down the pike, we will adapt to them to meet the needs of the industry.”

Bill Kozek, president of Navistar’s truck and parts business, said it would be “beneficial to exhibitors and customers alike” for MATS to move to a biennial format.

Chris Hammond, executive vice president of sales at Great Dane Trailers, shared a similar view: “While we always review our participation each year, the concept of doing this every other year would certainly allow for much more dynamic shows as suppliers would have more things to show off as they are able to innovate further than what you currently may see on a year-to-year basis.”

Utility Trailer is planning to attend MATS next year, but “we feel that an every-other-year show format would be better, allowing more emphasis and new product introductions while not conflicting with Hanover in Europe,” said Larry Roland, the company’s director of marketing.

Brett Bartels, deputy general manager of sales and marketing strategy at Hyundai Translead, said a biennial schedule would be beneficial because companies don’t always have new products to showcase each year. The company will attend the show in 2016 and plans to continue doing so whether it’s annual or biennial, he said.

Cummins plans to exhibit at MATS in 2016, as it has every year since it began in 1972, said Amy Boerger, vice president of Cummins’ North American engine business.

“We may adjust our approach in keeping with our OEM customers’ plans,” she said. “However, with the proximity of Louisville to our corporate headquarters in Columbus, Indiana, the show provides a good way for many employees to connect with the end-customers of our products.”

Magnus Koeck, vice president of marketing at Volvo Trucks, said the company was just beginning to discuss its plans for 2016 and declined to speak specifically about MATS. “Nothing for us is a given from one year to another,” he said.

Göran Nyberg, president of Volvo Trucks in North America, also declined to speak about MATS but said the IAA show “has been a good concept for Europe.”

John Walsh, vice president of marketing at Mack Trucks, said: “At this time, we have no plans to alter our activities related to the 2016 Mid-America Trucking Show.”

Paccar Inc., whose brands include Peterbilt and Kenworth, declined to comment.

MATS also is a major event for fleets, drivers and providers of a vast array of products and services for the trucking industry.

“We enjoy all the years we have attended MATS and look forward to next year,” said Norita Taylor, spokeswoman for the Owner-Operator Independent Drivers Association.

The show also plays an important role in driver recruitment and company exposure for firms such as Mercer Transportation, a 100% owner-operator fleet.

“I don’t know of any other arena where we can find so many drivers to talk to in one place at one time,” said Brian Helton, Mercer’s marketing manager.

The flatbed and dry van carrier, which is based in Louisville, enjoys having people from throughout the industry visit its hometown each year during MATS, he said, adding that some truck drivers routinely take the week off and treat the event as a family vacation.

Mercer ranks No. 56 on the Transport Topics Top 100 list of the largest for-hire carriers in the United States and Canada.

Editorial Director Neil Abt contributed to this story.