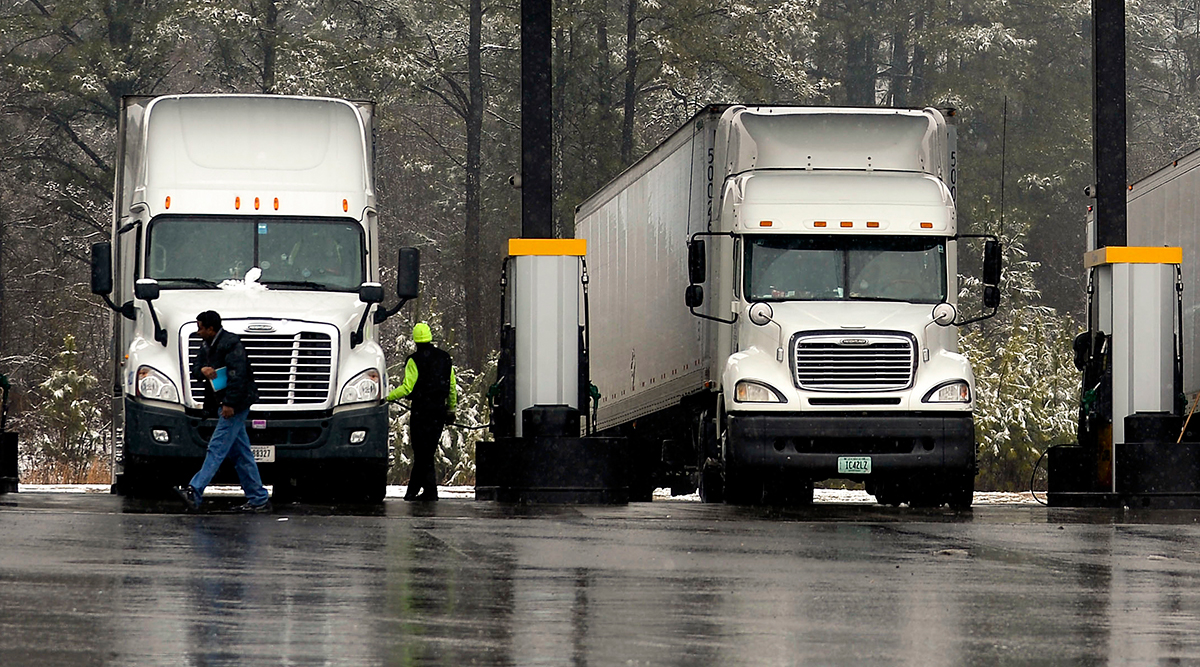 Truck drivers fuel up at a Love's in Emerson, Ga. (David Tulis/Associated Press)

EPA’s intention is to reduce NOx emissions from trucks by as much as 60% in 2045.

The current NOx standard is 0.2 gram per brake horsepower-hour, and was adopted in 2010.

EPA also will update greenhouse gas regulations for sectors where electrification is advancing at a more rapid pace, including in shorthaul tractors, commercial delivery trucks, school buses and transit buses.

At the same time, EPA reported it plans to set new GHG emissions standards for heavy-duty vehicles as soon as model year 2030 to more comprehensively address the long-term trend toward zero-emission vehicles across the heavy-duty sector.

EPA termed its NOx proposal, announced March 7, as the first step in its Clean Trucks Plan intended “to deliver significant and needed public health benefits by designing a program that sets ambitious standards and that are feasible for the trucking industry after giving appropriate consideration to cost and other factors, while supporting the American economy,” according to a release.

American Trucking Associations said it shares the EPA’s goal of cleaner air, and wants to help ensure an outcome that is not harmful to trucking.

ATA seeks a single national NOx emissions standard that can be achieved with workable, reliable technology — “anything less than that will be extremely problematic for ATA and our members.”

The Truck and Engine Manufacturers Association also reacted favorably to the chance for a national standard. EMA also hopes the final rule leads to increased fleet turnover of older trucks. “Engines made after 2010 emit roughly 30 times less NOx than those made before 2010. Yet only about 50% of the fleet has turned over and realized the benefits of that modern technology that eliminates 98% of NOx and particulate matter emissions,” the group said.

Other voices were quick to be raised.

The Union of Concerned Scientists said EPA’s proposal should be “at least as protective as the existing California truck rule [which applies only to California certified trucks] to protect public health and advance justice.”

Everyone deserves clean air to breathe. Our proposed standards for heavy-duty vehicles will protect the health of more kids across the country. https://t.co/KF440gkdfj

Meanwhile, EPA’s proposal “is just another reason to electrify if you can,” said Mike Roeth, executive director of the North American Council for Freight Efficiency. “It’s going to be harder and harder to deal with diesel and the regulations around it.”

“Whether EPA goes with option 1 or 2, the impacts will be similar: more expensive and more complicated diesel trucks, with lower fuel economy,” said Erik Neandross, CEO of Gladstein, Neandross. “Alternatives like natural gas, propane and zero-emission trucks will then be more competitive as they become closer in price parity.”

Gladstein, Neandross suggested it might not even be technically possible or feasible for diesel to get as low as .02 gram (option 1) so if that is the selected option, it would likely hasten the phase-out of diesel engines.

Diesel engines will continue to dominate many segments of the trucking sector “for some time yet, even as alternative fuels and zero-emission vehicles become more available,” said Allen Schaeffer, executive director of the Diesel Technology Forum.

Schaeffer’s looking for the “right rule,” one that brings further improvements in diesel technology and continued investments in new vehicles to meet both clean air and climate goals. “A rule that results in dramatic shifts in the new truck market — a pre-buy/low-buy — will be bad for jobs, the economy and the environment.”

In related news, 75 investors with $4.7 trillion of assets under management, on the same day as EPA’s proposal, sent a letter to the commissioners at the U.S. Securities and Exchange Commission to express increasing concern about climate change and the systemic and material risk it builds into the global economy, according to As You Sow, a shareholder advocacy nonprofit.

Scope 3 emissions, EPA noted, are the result of activities from assets not owned or controlled by the reporting organization, but that the organization indirectly impacts in its value chain.