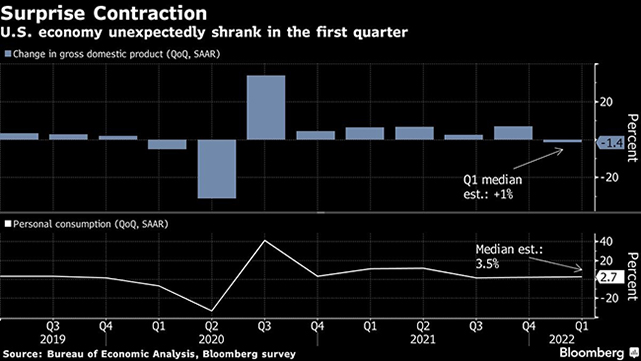 The U.S. economy shrank for the first time since 2020, reflecting an import surge tied to robust consumer demand. While the surprise contraction adds to political headaches for President Joe Biden, it’s unlikely to dissuade the Federal Reserve from hiking interest rates aggressively to combat inflation.

Gross domestic product fell at a 1.4% annualized rate in the first quarter following a 6.9% pace at the end of last year, the Commerce Department’s preliminary estimate showed April 28. The median projection in a Bloomberg survey of economists called for a 1% increase.

The report is more an illustration of how GDP calculations tend to be volatile from quarter to quarter, not necessarily indicating weakness in the economy or a sign of recession. The contraction was due to a jump in imports and a drop in exports, coupled with a slower buildup of businesses’ stockpiles. On a year-over-year basis, the economy grew 3.6%. 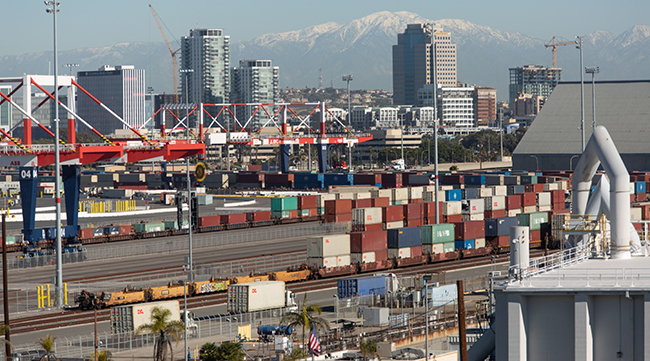 Together, trade and inventories subtracted about 4 percentage points from headline growth. Government spending shrank, also weighing on GDP. But real final sales to domestic purchasers, a measure of underlying demand that strips out the trade and inventories components, accelerated to a 2.6% annualized rate.

Against a backdrop of quicker inflation and solid spending, Fed monetary policy is still geared for a half-point rate hike next week. Nonetheless, officials need to balance tighter policy with risks to demand.

The economy faces other potential headwinds that include knock-on effects from Russia’s war in Ukraine. Growth prospects in Europe are deteriorating, some raw materials are in short supply and the Chinese government’s severe pandemic-related lockdown measures are leaving supply chains in disarray.

The S&P 500 rose and the yield on the 10-year Treasury note remained higher along with the dollar.

“With strong growth of consumer spending, business investment and employment in the first quarter, the U.S. economy was not in a recession at the beginning of the year,” said Bill Adams, chief economist at Comerica Bank. “Growth should resume in the second quarter as the trade deficit and inventories become smaller headwinds.”

The Commerce Department’s data showed personal consumption, the biggest part of the economy, rose an annualized 2.7% in the first quarter, compared with 2.5% at the end of 2021. Services spending added 1.86 percentage points to GDP, while goods spending stagnated, reflecting changing consumer behavior.

At the start of this year, spending surged as COVID-19 cases declined. As the quarter dragged on, high inflation began to take a bite out of purchasing power. Nonetheless, many corporate executives on recent earnings calls touted the durability of the American consumer.

—With assistance from Reade Pickert, Kristy Scheuble and Ana Monteiro.