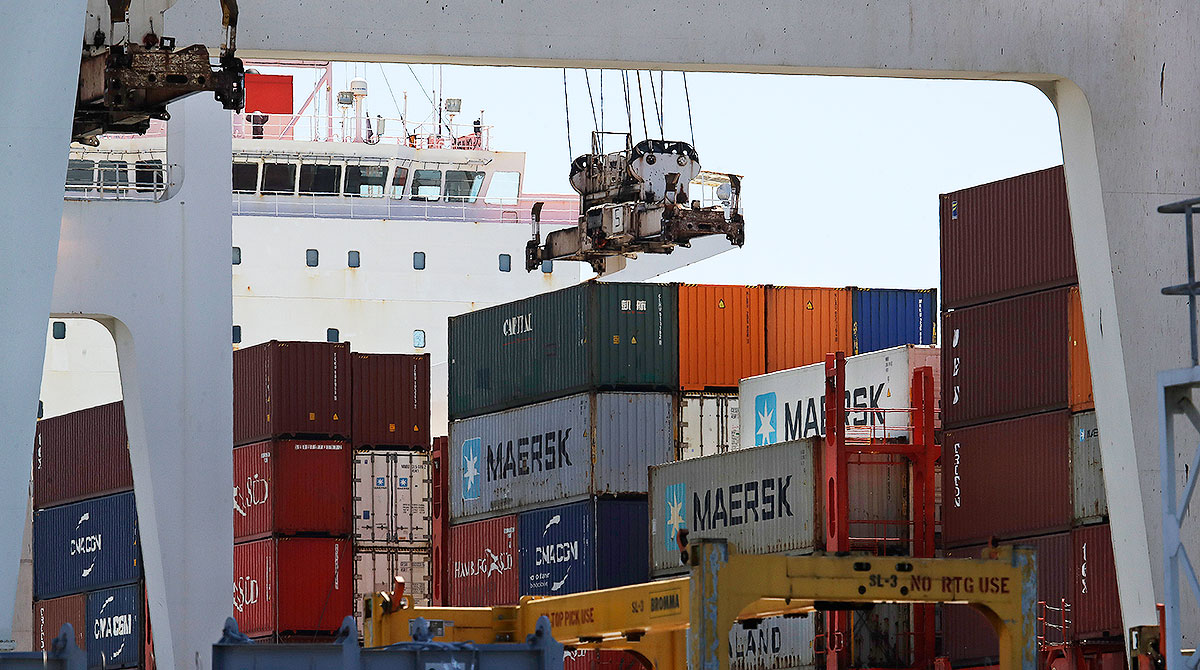 The containership Kota Ekspres is unloaded at the Port of Oakland. (Ben Margot/AP)

WASHINGTON — The U.S. economy slowed to a modest growth rate of 1.9% in the summer as consumer spending downshifted and businesses continued to trim their investments in response to trade war uncertainty and a weakening global economy.

The Commerce Department reported Oct. 30 that the July-September performance for the gross domestic product, the economy’s total output of goods and services, was just below the 2% rate of growth in the second quarter.

Economists had been forecasting a much bigger slowdown with fears GDP could slump to 1.4% or less given a number of headwinds.

Still, the GDP gain was far below the 3%-plus increases that President Donald Trump has set as a benchmark to demonstrate that his policies are succeeding in lifting the economy above the modest 2.2% growth of the Obama years.

Consumer spending, which accounts for 70% of economic activity, grew at a solid 2.9% rate in the third quarter, but it was still a slowdown after a 4.6% surge in the second quarter.

There were signs the trade battle and weak global growth were taking a toll as businesses cut back on their investment spending for a second straight quarter in the face of rising uncertainty. Business investment in structures plunged at a 15.3% rate in the third quarter after a sharp 11.1% drop in the second quarter.

Residential investment, which had been falling for six quarters, finally saw an increase, rising at a 5.1% rate, a gain that reflected the impact lower mortgage rates from the Federal Reserve’s rate cuts were having on sales and construction plans.

The trade deficit, which has widened as Chinese retaliatory tariffs have hurt farm sales, trimmed GDP growth by about 0.1 percentage point in the third quarter.

Growth this year is forecast to come in around 2.3%, which will be a disappointment to the president, who has repeatedly proclaimed that his economic policies featuring tax cuts, deregulation and tough enforcement of trade agreements would lift the country out of the doldrums of the slowest economic expansion in the post-World War II period.

Without that support, economists had forecast a slowdown this year. They also say that Trump’s trade war with China, by disrupting supply chains and hurting business confidence, will shave about a half-percentage point from the already slower GDP figure.

The president, however, has blamed the Federal Reserve for the weaker growth, calling Fed officials “boneheads” for raising rates four times last year and being slow to cut rates this year.

The central bank is expected to slash its key policy rate for a third time when this week’s meeting ends Oct. 30. Economists believe without the Fed’s efforts to lower rates, the economy might already be in a recession.

Most analysts think the current recordlong expansion, now in its 11th year, will avoid a downturn in 2020, a presidential election year, but growth will be far below the 3% Trump has promised to achieve.

Mark Zandi, chief economist at Moody’s Analytics, said he does not have a recession in his forecast, but a downturn can’t be ruled out, especially if the United States and China do not achieve at least a cease-fire that keeps further tariff hikes from going into effect. That would slow GDP growth even further.

“President Trump’s trade war is doing significant damage to the economy,” Zandi said. “If the economy slows even more than I am anticipating, I think that could ignite a recession.”