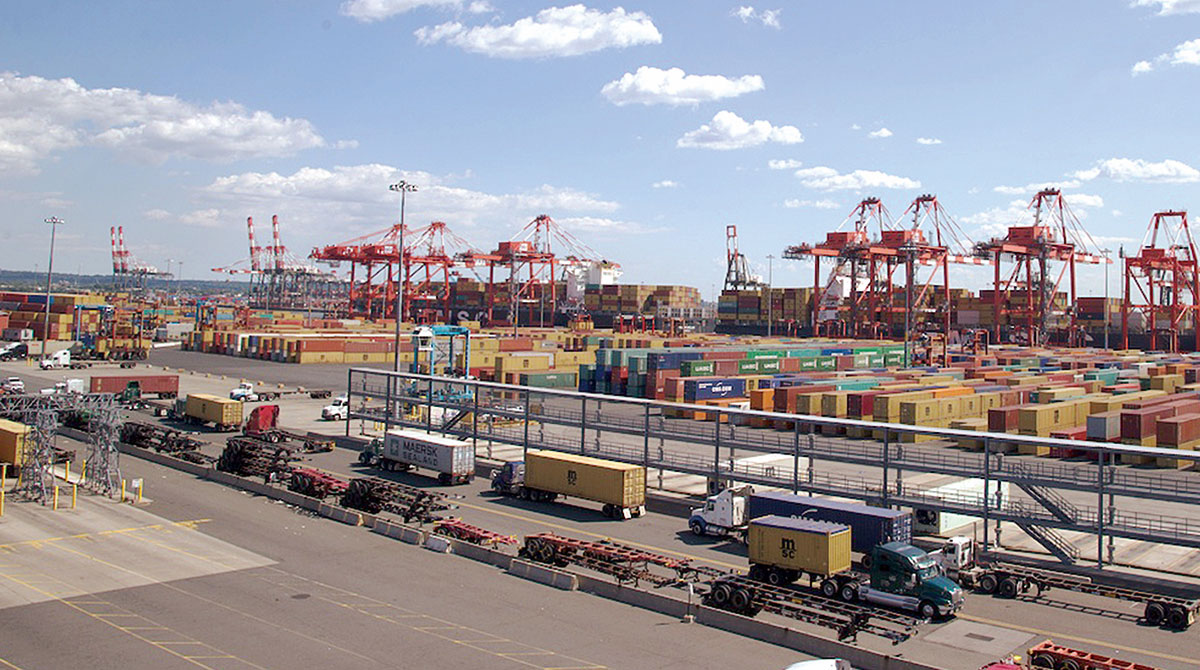 Supply chain obstacles are forcing U.S. retailers to rewire their shipping routes. The early winners are East and Gulf Coast ports, which are taking business from rivals out west at the fastest pace in at least two decades. Some of the gains, retail executives say, might be permanent.

The number of inbound containers arriving at Eastern ports rose about 9% in the first half of the year compared with the same period in 2021 and volumes through Houston — the Gulf Coast’s leading container port — were up 22%, according to the National Retail Federation. Imports through the West Coast were down 0.1%.

Those higher volumes are a windfall for ports from Massachusetts to Texas — leading to greater investments in ports and warehouses while increasing demand for workers to staff the bigger operations. Eastern and Gulf gateways for trade boosted their share of Asian imports by almost 5 percentage points in the first quarter of 2022 from a year earlier and 4 percentage points in the second quarter, the biggest increases since at least 2008, according to digital freight forwarder Flexport Inc. 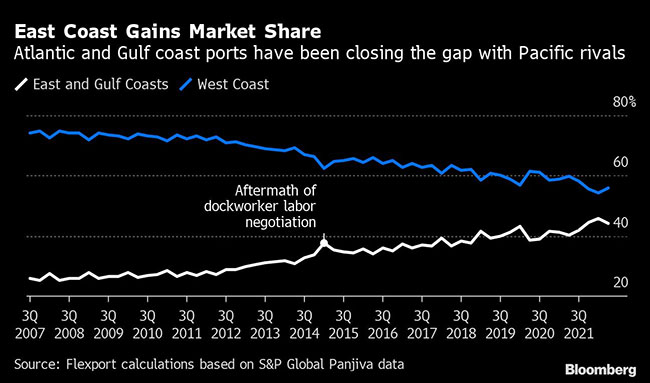 “Charleston and Savannah were both very aggressive at sort of wooing us,” said Chris Peterson, chief financial officer of Newell Brands Inc., which sells Rubbermaid, Yankee Candles and Mr. Coffee products, among others. The pitch from port authorities in states such as South Carolina and Georgia has been, “we’re investing in infrastructure such that you should feel confident building infrastructure that’s reliable on it,” he says.

As it stands now, 44% of Asian imports enter the country via the East and Gulf Coasts, compared with about one-quarter in 2008. That has come at the expense of the West Coast, which has seen its share fall to 56% from about 75% during the same period.

Within the next several years, Newell Brands aims to import about 50% of its products through East Coast ports including Charleston, Savannah and the country’s second-largest port complex — New York and New Jersey. The other half will continue to enter through the West Coast, down from the current level of 80%. To accommodate the shift, Newell is spending $100 million this year to refurbish five warehouses and outfit two new ones.

The eastern expansion of logistics networks is among the many economic trends that the pandemic is accelerating.

Importers began to divert an increasing amount of cargo after congestion at Los Angeles and Long Beach, the country’s two largest ports, got so bad in 2021 that at one point more than 100 ships were lined up waiting to unload. Delays of two weeks or more meant that many store chains lacked the merchandise they needed and missed out on holiday sales. So some firms shifted east to bypass California’s bottlenecks and, this summer, to avoid the possibility of even longer waits amid ongoing labor negotiations on the docks.

While much of the shift is temporary, an increasing number of retail executives say they plan to stick with the East Coast for the long haul.

“We used to think the West Coast was the only option,” says Jose Velez, director of operations for Doral, Florida-based Creative Home and Kitchen, which imports products including cast-iron cookware from Colombia and holiday decorations from China. “The pandemic has opened our eyes to more options to arrive into the States.”

The company, which sells to Macy’s Inc., Bed Bath & Beyond Inc. and other major retailers, started to import some products through the Port of Savannah at the end of 2021 and then send its merchandise to Miami on rail. “We’d never shipped there before the pandemic,” Velez said.

The supply snarls on the West Coast have forced Jim Emme, chief executive of dietary-supplement company Now Foods, to diversify. The firm imports around 8% of its products through Charleston, a South Carolina port that’s seen inbound shipments jump by almost one-fifth this year. “We’re encouraging our freight forwarders and our vendors to consider ports like Charleston,” Emme said.

While it’s about 30% more expensive for Emme to bring Chinese imports through Charleston versus Long Beach due to the longer route and higher fuel costs, he says it’s worth it to ensure the company’s products aren’t waylaid on route. Some of the vitamins and supplements have a short shelf life.

“Time was of the essence,” Emme said. He has already raised prices twice during the pandemic and he’s weighing the possibility of a third hike on some products in part due to the increased supply-chain costs.

Now Foods plans to import through Charleston for the long term to have more alternatives, Emme says, although he expects the volume of goods to fall to about 5% over time as the West Coast backlog clears. He and other executives are also waiting for the outcome of contract negotiations between 22,000 dockworkers in California, Oregon and Washington and their employers. During the last talks in 2014, some shippers also chose East Coast options to avoid delays that only ended when the White House got involved nine months into the negotiations.

The Pier B On-Dock Rail Support Facility project team will update the public in a on the status of the Port of Long Beach project during a virtual community meeting at 10 a.m. Wednesday, Sept. 7.

Emme and other executives say they will continue to rely on the West Coast to import most of their merchandise because they manufacture so many of their products in China. More than 40% of inbound cargo from Asia pass through the Los Angeles and Long Beach facilities and traffic remains robust, even if it’s not growing at the same pace as the east.

Long Beach Executive Director Mario Cordero said he’s “playing the game to win,” noting that his port has invested $4 billion over the past decade and is planning $2.8 billion more in the years to come.

“It’s in the country’s interest that all of our major container gateways work in collaboration to move the nation’s commerce,” he said. “We will remain as the most significant strategic gateway for the United States, given our closer proximity to the most important trade region.”

Other retail executives say their expansion to new ports on the Atlantic Ocean is just temporary while they await a return to some form of normal in California. Diverting to the East Coast “is adding time and it does add additional costs,” said Lindsay Keys, logistics director at linen company Brooklinen. “We’re kind of putting a band-aid on a bigger, industrywide problem.”

The shift to the East and Gulf Coasts has led to new congestion problems that have kept some companies away during the past year or so. Ports in these areas are on track to eventually snag roughly half the market, said Eric Oak, a Flexport analyst. “Supply chains are living creatures that evolve over time,” he said. Keys says the Brooklyn-based company will continue to divert some merchandise through the Port of Virginia for at least one more year, but eventually return those imports to Long Beach. Norfolk’s port has become the most efficient in the U.S. for handling containers, according to World Bank estimates.

Several East and Gulf Coast hubs are trying to convince retailers that they are a safe bet for the long haul, and the $5.3 billion expansion of the Panama Canal in 2016 helped pave the way to widen U.S. trade lanes with Asia.

South Carolina has invested $2 billion over the past six years to expand Port of Charleston, while Port of Virginia will devote $1.3 billion to improve terminals, tunnels and the green transition in coming years. Even a smaller port like Boston is grabbing a piece of the action, dredging its harbor to allow bigger vessels and winning shipping services from southeast Asia.

For Newell Brands, a revamped port strategy will enable it to ship most of its products to customers including Walmart Inc. and Target Inc. within two days or less — down from the current week to 10 days it can take to deliver some items, such as Graco baby gear. CFO Peterson says the goal is to “not be so constrained by a single port.”