Driver Turnover Rises Slightly but Remains Healthier Than Year Ago 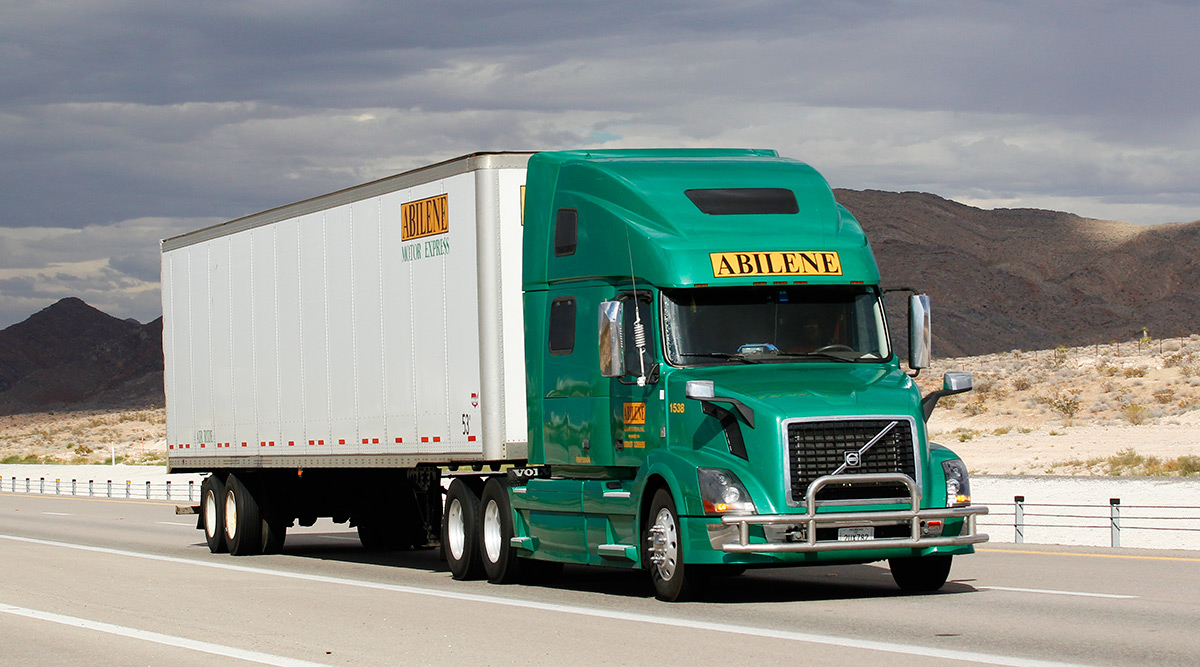 Driver turnover at large truckload fleets was 74% during the first quarter of 2017, a 15 percentage-point improvement over year-ago levels but slightly worse than 4Q 2016 levels, American Trucking Associations said in a report.

The 1Q result was a few points higher than the 71% turnover rate large fleets experienced at the end of last year, which is indicative of a swing in business for fleets from last year to this year, said Bob Costello, ATA’s chief economist and author of the quarterly report.

“Turnover had been trending down prior to the first quarter because freight has been soft,” Costello said. “However, as freight picks up going forward, it will do two things — drivers have more options and fleets get more aggressive in their recruitment,” and that will accelerate turnover, he said.

Typically, large carriers have much higher turnover than smaller fleets, and 1Q was no different: The turnover rate for fleets under $30 million in annual revenue was at 66%, 22 points lower than at this point in 2016. Less-than-truckload carriers saw typically low turnover levels, rising just 2 points to 10%. 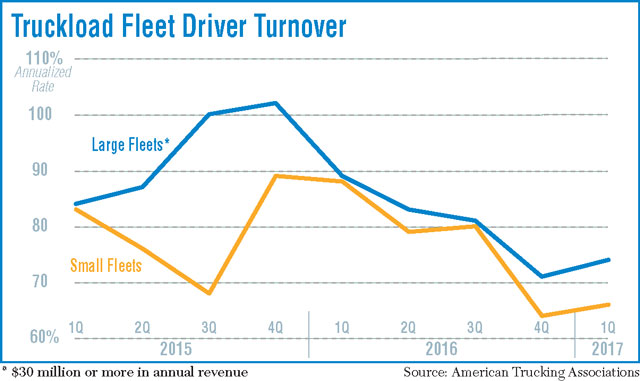 ATA’s turnover rate is configured by taking the quarterly number for turnover and multiplying it by four to get an annual rate, Costello explained, adding that while terminations are included, the broader category is separations. “So it is drivers leaving on their own (e.g., new job, retirement, etc.) or being terminated,” he said.

Going forward, Costello said that “the trend line is likely to be up, not down.”

Shannon Crowley, vice president of risk management for John Christner Trucking, isn’t surprised by the numbers but said it’s important to remember that turnover is “very cyclical.” This time of year, especially, drivers can get lured into traditionally summer-oriented occupations such as construction, Crowley said, but added that his company hasn’t had sustained trouble.

“In the fourth quarter of last year, turnover was fairly low and fairly controlled, and then it sort of ramped up a little bit going into the first quarter and seemed to level off,” Crowley said. “But midway through the second quarter, it dipped again, and then as we exit the second [quarter] heading into summer, it’s pretty typical that we will see an uptick.

“Opportunities arise in construction and some other trades that pick up and compete with trucking,” he said, “and a bit of a rebound in the oil and gas industry [also has affected trucking]. Some folks who drive when that [oil and gas] activity slows down and may not have been driving before kind of find their way back to trucking for a period of time.”

Kolen Jones, president of Richmond, Va.-based Abilene Motor Express, told Transport Topics that the company’s 1Q turnover was in the low 70% range. The longhaul dry-van and refrigerated carrier has about 450 trucks.

“It’s pretty steady with last year’s rates,” he said. “The first part of the year, drivers were hesitant to move. When there isn’t a lot of good freight moving and drivers are waiting for a dispatch, there isn’t much demand on the recruiting department to get more people. But when freight picks up and dispatchers are waiting for available drivers, you’ll see recruiters looking for drivers talking about pay per mile and benefits. We think turnover will pick up later this year and carriers will raise pay to get drivers.”

He also said that while contract rates were flat earlier this year, he anticipates shippers will call to find available trucks when capacity tightens, prompting a per-mile rate hike and extra revenue to fund an increase in driver pay.

For Combined Transport, which is based in Central Point, Ore., turnover has inched up so far in 2017. The specialized heavy-haul carrier must compete with construction companies to keep drivers, and it works to make driving an attractive option, company President Mike Card said.

Jay Green, vice president of business development for Strategic Programs Inc., which culls employee retention and turnover data for industries such as trucking, said inclusiveness is also a vital issue for drivers. “Far and away, at the end of the day, the No. 1 most important thing we keep hearing over again from truck drivers is that people want to feel they’re part of the team, part of some sort of connection with their employer,” he said. “As fuzzy as that may sound, it’s important for every worker, from health care to engineering to trucking.”