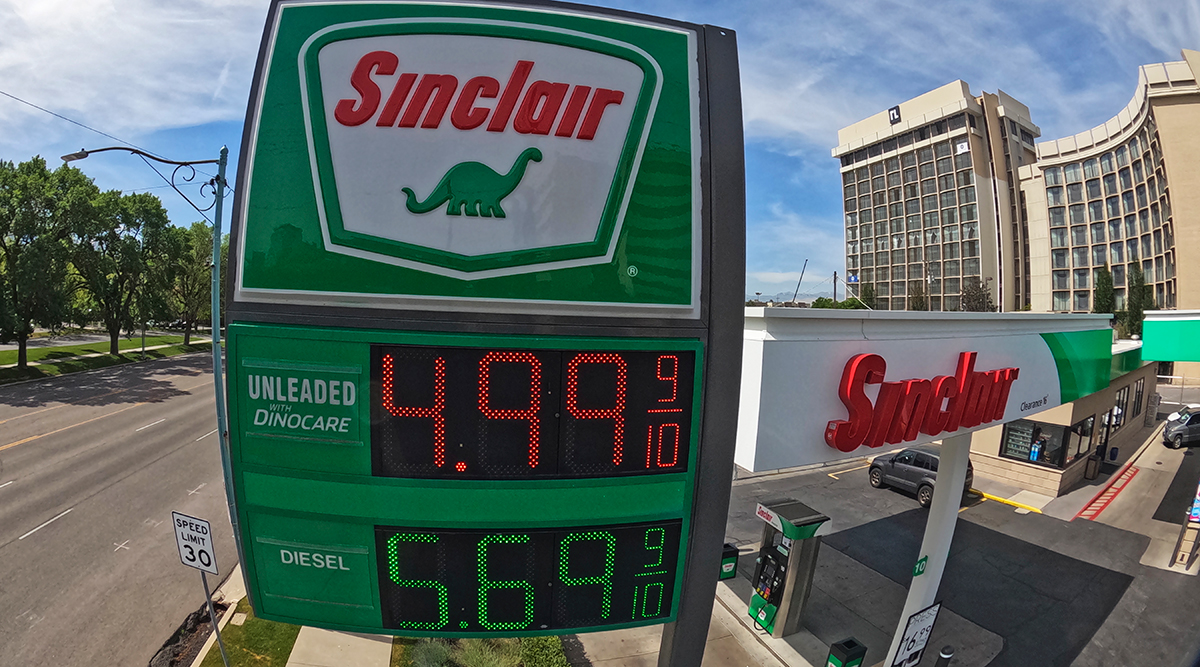 The national average price for a gallon of diesel reached a record high this week at $5.718 a gallon, according to data released by the Energy Information Administration June 13.

EIA made survey changes to its methodology, so a direct comparison to previous prices is not particularly pertinent. But under the previous methodology, diesel was $5.703 a gallon last week, and last year at this time it was $3.286 a gallon.

Diesel is most expensive on the West Coast at $6.423 a gallon, and especially so within California, where it is $6.887 a gallon.

Even under the new methodology, diesel remains cheapest in the Gulf Coast region, where it averages $5.37 a gallon.

There was no change to the methodology for calculating gasoline prices, and the national average eclipsed the $5 ceiling for the first time at $5.006 a gallon following a 13-cent increase from $4.876 previously.

Oil industry analyst Phil Flynn in Chicago with Price Futures Group told Transport Topics it’s possible that gasoline and diesel prices may have reached their peak and that a 10 cent per gallon drop is possible over the next several weeks — possibly before the July 4 holiday if the price of oil begins show some signs of moderation. 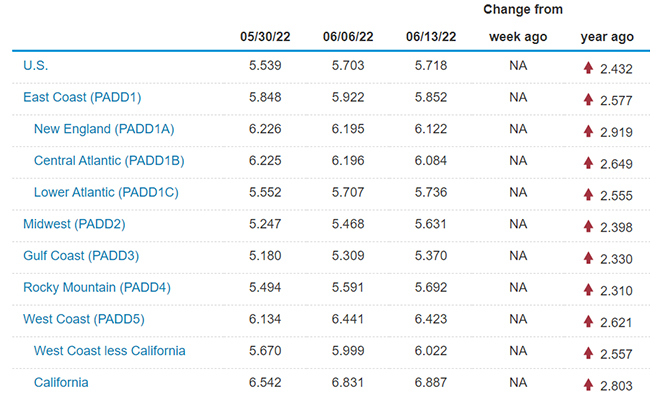 “I think there is an end in sight,” Flynn said. “The oil futures markets have stabilized and it signals the refiners are pushing the pedal to the metal and producing a lot of diesel and gasoline. But make no mistake about it, we’re still short of refining capacity. I do see prices leveling off, but there’s a big caution flag, I could be wrong. You can’t have prices going up, every day, forever. But I think we’ve only had one down day in the last three months.”

Since the beginning of the COVID-19 pandemic, more than two years ago, at least 11 U.S. refineries shut down, significantly cut operations or switched to other petroleum products, including renewable diesel.

According to Dallas-based energy consulting company Turner-Mason, the supply-demand balance is tight. Along the Atlantic Coast, the situation is exacerbated by the recent loss of Russian product exports into Europe.

In its most recent report on U.S. refining capacity, the Department of Energy on June 3 said overall refining capacity is up to 94.2% from 88.4% at the end of April. But while the percentage of refineries in operation is up, overall capacity had increased in 2020, but is now declined to nearly 2010 levels. In 2010, U.S. facilities were capable of refining 17.7 million barrels per day

Although several existing refineries have expanded and increased capacity the past several years, Flynn emphasized no brand new refinery has been built in the U.S. in the past 40 years.

“Some of these refineries that have been up for sale are available for pennies on the dollar and no one is stepping up to buy them,” Flynn said. “Refining margins are at a record high. You would think if you were making a business decision it would be time to take a refinery, but there’s an active movement to close them down in a couple of years.” 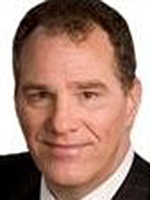 Another major refinery could close, at the latest by the end of 2023, halting production of nearly 264,000 barrels of oil per day. LyondellBasell Industries plans to shut its more than 100-year-old refinery on the Houston shipping channel because the company said it has become too expensive to operate. However, Turner-Mason said the refinery will be eventually sold because it predominantly refines heavy crude which is made into jet fuel and diesel.

The company has been seeking a buyer for the facility, but as recently as a few months ago, said it had no takers. The country’s refining shortage comes at a time when the U.S. is entering the 2022 hurricane season and forecasters are predicting an “above average” season and the possibility of 21 named storms from June 1 through Nov. 30.

According to DOE, more than 47% of total U.S. petroleum refining capacity is located along the Gulf of Mexico, as well as 51% of total U.S. natural gas processing plant capacity.