Price Drop Is Second Straight After Nine Weeks of Gains 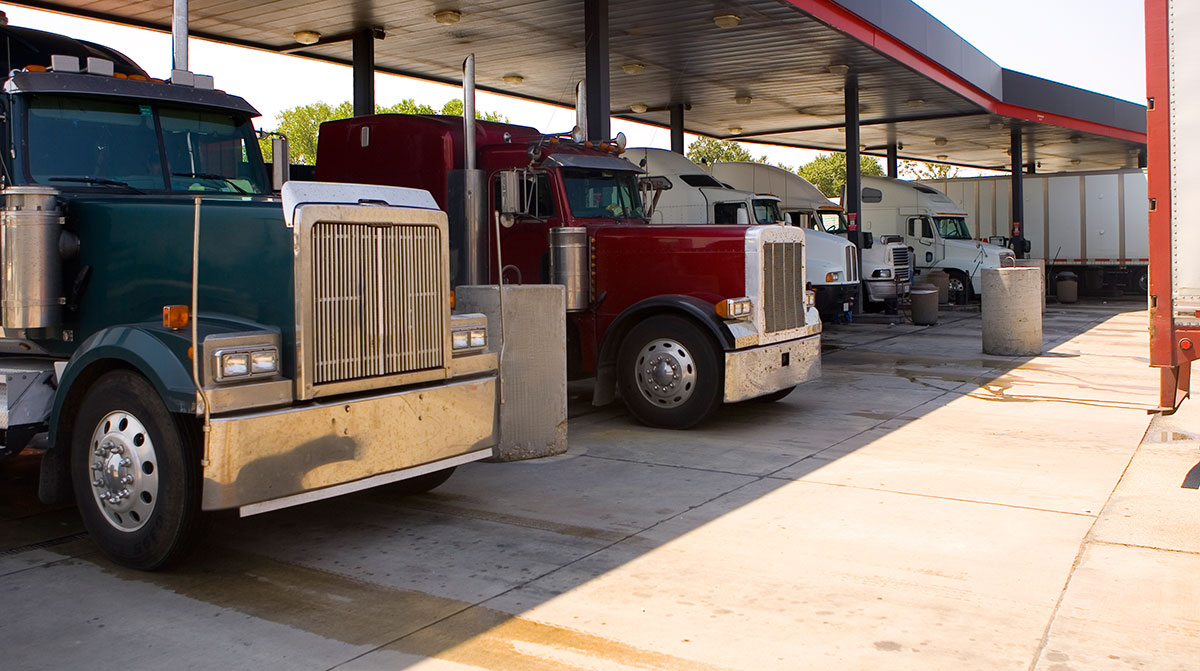 The national average price for a gallon of diesel has dropped 1.4 cents the past two weeks after gaining 34.9 cents from Sept. 20 to Nov. 15. (Getty Images)

The national average price for diesel dipped four-tenths of a cent to $3.72 a gallon, according to Energy Information Administration data released Nov. 29.

Diesel’s price fell for the second consecutive week, totaling 1.4 cents, after rising for nine straight weeks, from Sept. 20 to Nov. 15. 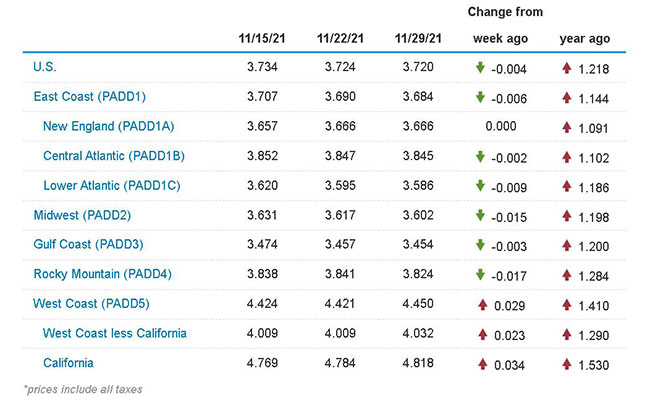 In the 10 regions in EIA’s weekly survey, diesel went down in six, up in three and remained unchanged in New England. The biggest decrease was 1.7 cents in the Rocky Mountain region; the largest hike was 3.4 cents in California.

Gasoline fell by 1.5 cents to $3.38 a gallon for the national average.

One industry expert offered the maxim that in the energy world, fuel prices go up like a rocket and come down like a feather.

The price of a barrel of oil is the biggest factor on retail fuel prices, Glen Kedzie, energy and environmental affairs counsel for American Trucking Associations, told Transport Topics. 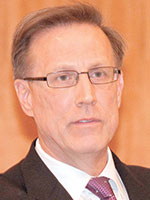 “For most trucking companies, they build any fuel increase into their contract price through fuel surcharges,” Kedzie said.

The rise in diesel tends to hit the smaller operators more than larger fleets.

“They don’t have the leverage. They don’t buy in volume for a better price per gallon,” he said. “They may not have fuel cards. They just go out there and pay the price that is on the marquee at the travel center.”

Some of ATA’s largest members purchase fuel in bulk.

“They have storage facilities. They get better deals. That’s how society works,” Kedzie said. “If you are bigger, you have better advantages in terms of everything financial.”

And as trucking pursues a zero-emission future, it’s a tightrope, he said, “because we have to deal with the here and now.”

Diesel is going to be around for the next 30 years,” Kedzie said. “This isn’t about flipping a switch and it disappears overnight.

“Diesel is going to be around for the next 30 years,” Kedzie said. “This isn’t about flipping a switch and it disappears overnight.”

The direction of crude oil prices — central to the retail price of fossil fuels — appeared increasingly tied to uncertainties over the reach of the omicron variant of the coronavirus, which could weaken economic growth, and whether OPEC and its allies (OPEC+) would send more oil to market.

Bloomberg News reported Dec. 2 that OPEC+ agreed to continue boosting oil production, lifting it by 400,000 barrels per day in January. However, it added a get-out clause to its plan to respond to any quick falloff in demand.

The Infrastructure Investment and Jobs Act includes a provision to draw down 87.6 million barrels of crude oil from the U.S. Strategic #Petroleum Reserve in fiscal years 2028 through 2031. https://t.co/qU070mxyWa https://t.co/OLRxNHNf2P

The cartel’s ability to adjust easily sent oil futures climbing again and into the mid-$60 range at noon Dec. 2. The price had reached $83 earlier this year.

Prices have plunged into a bear market in recent days, and as OPEC+ met, Germany announced strict coronavirus curbs, underscoring the risk to demand.

An increasingly hawkish tone from the Federal Reserve also is weighing on the growth outlook for the U.S. economy. A major, as yet unanswered, question is whether existing virus drugs will work against omicron, according to Bloomberg.

The first infection of the new strain was detected in the U.S., while cases in South Africa doubled overnight in early December. Still, there are those who think oil’s drop has been overdone. Goldman Sachs Group Inc. said prices have “far overshot” the impact of omicron. Bank of America Corp. said it was sticking to its $85-a-barrel forecast in 2022, with possible surges past $100 if air travel rebounds.

Under the law, the Treasury Department would create an annual user fee for passenger motor vehicles, light trucks, and medium- and heavy-duty trucks. “[The amount] may vary between vehicle types and weight classes to reflect estimated impacts on infrastructure, safety, congestion, the environment, or other related social impacts.”

The pilot participants would be volunteers who would be able to choose among different methods to track VMT.

A report to Congress each year once the pilot begins would analyze whether motor vehicle per-mile user fees “can maintain the long-term solvency of the Highway Trust Fund and improve and maintain the surface transportation system, which shall include estimates of administrative costs related to collecting such motor vehicle per-mile user fees,” among other metrics, according to the bill.

“VMT has been on the table for several years and will continue to be refined, and sometime in the future it’s the logical end game in how to tax all transportation fuels equitably,” Kedzie said.

Experts have noted the road doesn’t know the difference between a hydrogen fuel cell vehicle, a diesel truck, gasoline or natural gas vehicle or electric vehicle. Each of those vehicles produces stress and strain on the asphalt, the concrete, the substrata.

Average Price of Diesel Nudges Up to $3.338 a Gallon