Freightliner, a unit of Daimler Trucks North America, was the market leader throughout the year. (Rolling Stone2009/Flickr)

Sales were the highest for that month since 2006, when they were 26,462, WardsAuto.com reported. 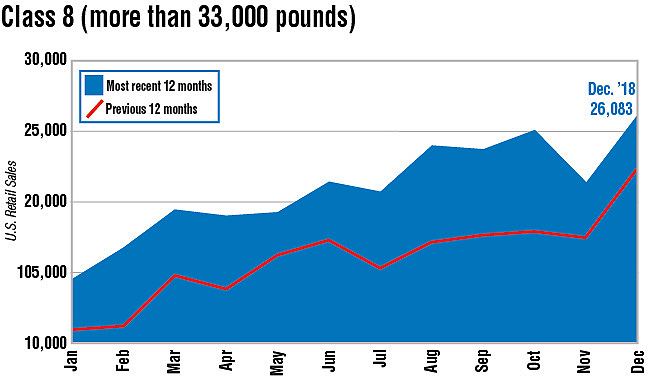 About 20% of the sales supported fleet expansion.

Sales intensified in the second half of the year.

“The strong freight demand in 2018 kind of outran the system, and the market is still catching up,” Ake said.

Meanwhile, Tam said the indications are conditions may get a little bit softer sooner as strong freight growth and freight-rate growth slow.

And while truck production is likely to stay high to clear a large backlog, he expects to see “an early indication in the pace of that softening.” 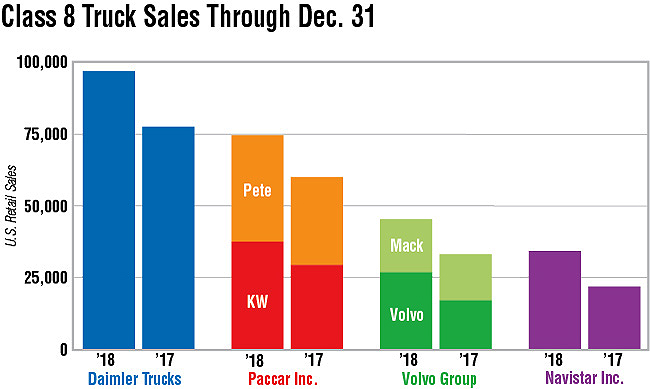 All truck makers posted higher total sales in 2018 compared with a year earlier — pointing to new features in their latest trucks as factors — but only two increased annual market share.

The only increases in market share came at International, a unit of Navistar Inc. and Volvo Trucks North America, a unit of Volvo Group.

“If everybody is producing trucks as fast as they can, growing share is an indicator that demand is skewing in our favor,” said Steve Gilligan, vice president of product marketing at Navistar.

Gilligan said sales of International’s A26 engine are up year-over-year “and that’s encouraging. Also, the A26 is now available in all our vocational models.” The company launched the 12.4-liter engine in February 2017, aimed initially at regional and longhaul trucking. 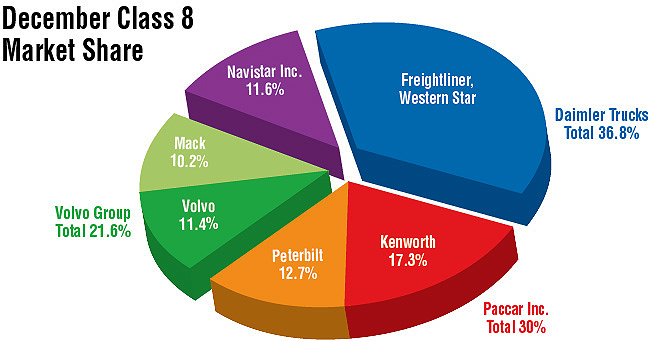 Peterbilt and Kenworth are units of Paccar Inc.

Looking at the near-term outlook, Tam said, “A lot of it hinges on what happens with the trade negotiations that will take place in February and, of course, who knows what is going to happen there. But I think they have broad implications not only from a domestic economic standpoint but also from an international economic standpoint.”

In the meantime, Tam said the per-day build rates in November were the highest of the year, “right at 1,400 units, a stiff rate. And that is where Q1 is picking up at, and then we will probably start seeing some increases for Q2.”

Other truck makers did not respond to a request for comment.