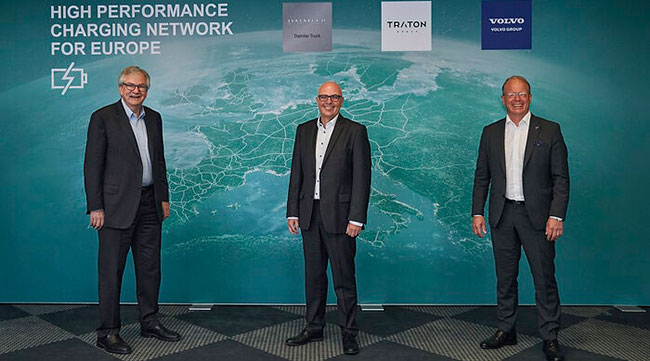 Daimler Truck, Volvo Group and Traton Group announced plans to install and operate a public electric vehicle charging network for longhaul trucks of all brands and motor coaches across Europe.

The move is intended to jump-start the needed infrastructure and enhance customer confidence as Europe moves toward climate-neutral transportation by 2050, according to the truck makers.

The initial nonbinding agreement lays the foundation for a joint venture — equally owned by the three truck makers, that otherwise will remain competitors — starting next year. It is planned to operate under its own corporate identity and be based in Amsterdam.

Together with the @TRATONGROUP and @Volvo Group, we plan to pioneer a European high performance #charging network for battery electric heavy-duty trucks. Our joint aim is to support the EU’s transformation to CO2-neutral transportation:

Together, the truck makers would invest $592 million (500 million euros) to install and operate at least 1,700 high-performance green energy charging points close to highways as well as at logistic and destination points, within five years from the establishment of the JV.

“It is the joint aim of Europe’s truck manufacturers to achieve climate neutrality by 2050. However, it is vital that building up the right infrastructure goes hand-in-hand with putting CO2-neutral trucks on the road,” Daimler Truck CEO Martin Daum said in a release.

Volvo Group CEO Martin Lundstedt said the truck makers were “making a breakthrough for our customers” and it comes in a political environment ready “to make fundamental progress towards sustainable transport and infrastructure solutions.”

The next step, said Traton CEO Matthias Gründler, “should be a strong engagement of the EU for the full scale-up of a charging network across Europe.”

The plans also call for the number of charging points to increase as additional partners join and through public funding, the companies noted in a release.

Under the truck makers’ plan, battery-electric vehicle fleet operators will be able to leverage two charging needs: fast charging, tailored to the 45-minute mandatory rest period in Europe focusing on long-distance transport, which is the highest priority of the future JV; and also overnight charging.

It is the joint aim of Europe’s truck manufacturers to achieve climate neutrality by 2050.

Meanwhile, in the U.S. — where Class 8 brands from the three European-based truck makers account for about 65% of U.S. retail sales in the heavy-duty segment, according to WardsAuto.com — electric trucks are starting to emerge from their developmental cocoons.

Also, in April, the biggest U.S. charging company, ChargePoint Holdings Inc., went public via a special purpose acquisition company (or SPAC). Other companies, including EVgo Services and Volta Industries Inc., were poised to follow, Bloomberg News reported. Fueling cars and trucks at a public site always has been a low-margin business, with gasoline stations making much of their money from selling snacks, coffee and cigarettes, the report also said.

Much of the first wave of truck charging is expected to take place conveniently at fleet terminals.

“That has to be the biggest challenge,” he said, “and the biggest opportunity to continue to educate our customers about infrastructure.”

The American Transportation Research Institute recently noted among its top priorities this year will be a trucking industry-focused look at the electrical infrastructure issues associated with deploying electric trucks.

“The federal government’s support for all of the above will be required in order to create a universally accessible, cohesive, nationwide experience viable for the nation’s fleets.”