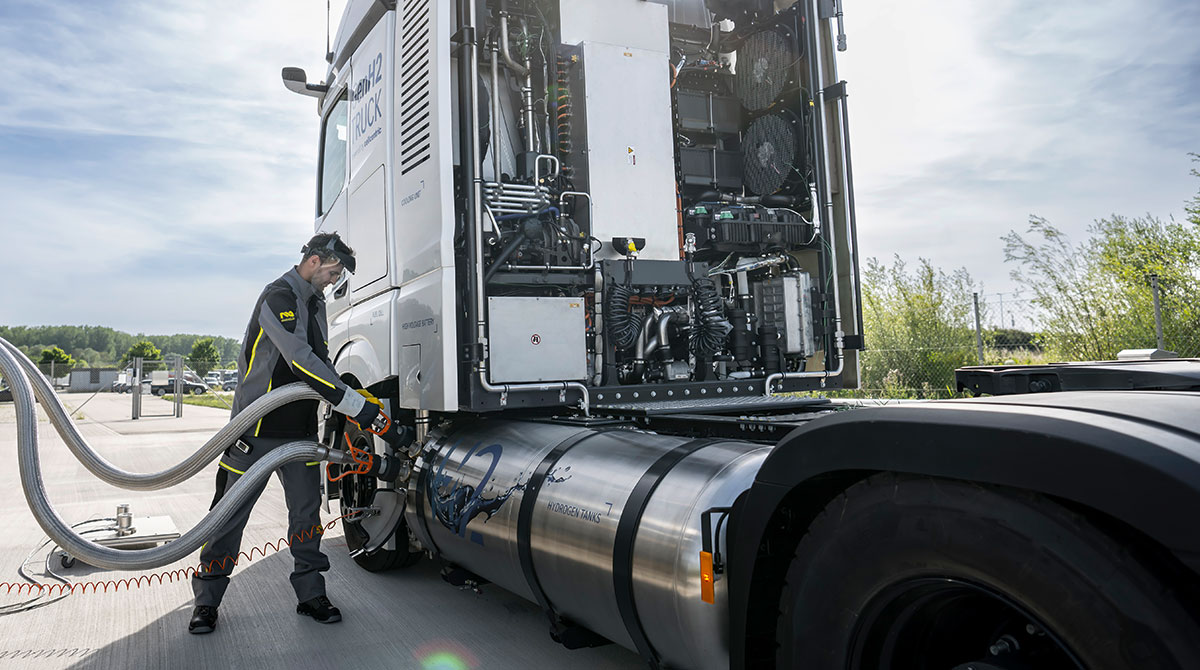 To test the use of liquid hydrogen in a commercial vehicle fuel cell, Daimler Truck announced it is putting a prototype heavy-duty truck and filling station into operation in Germany.

Series production of hydrogen-based trucks suitable for longhaul applications is planned for the second half of the decade, according to Daimler. They are intended to have a range of up to 1,000 kilometers (621 miles).

Next milestone with hydrogen-based drives: We are putting another prototype of @MercedesBenz GenH2 Truck into operation to test the use of liquid #hydrogen. The aim is to increase the range & enable comparable performance to conventional diesel trucks.
https://t.co/7SQQ4D8VvO pic.twitter.com/0nfdlyCsDj — Daimler Truck AG (@DaimlerTruck) June 27, 2022

The Stuttgart, Germany-based truck maker noted it preferred liquid hydrogen in the development of hydrogen-based drives given its significantly higher energy density, by volume, compared with gaseous hydrogen — as a result, more hydrogen can be carried, which significantly increases the range and enables comparable performance of the vehicle with that of a conventional diesel truck.

Recently, the truck maker notched its first successful liquid hydrogen refueling of the prototype truck with Air Liquide. During the process, cryogenic liquid hydrogen at minus 253 degrees Celsius filled two 40 kilogram tanks mounted on either side of the chassis, where the hydrogen can be kept at temperature for a sufficiently long time without active cooling, Daimler reported.

Daimler, Iveco, Linde, OMV, Shell, TotalEnergies and the Volvo Group have committed to work together to help create the conditions for the mass-market rollout of hydrogen trucks in Europe as part of the H2Accelerate interest group.

At the same time, Daimler Truck reported it is working together with Linde on the development of a new process for handling liquid hydrogen through sub-cooled liquid hydrogen, sLH2, technology. Among other things, this approach enables even higher storage density and easier refueling compared to LH2, it said. The companies plan for the first refueling of a prototype vehicle at a pilot station in Germany in 2023.

Meanwhile, Daimler and its partners intend a high level of transparency and openness around the relevant interfaces of the jointly developed sLH2 technology. The goal, Daimler noted, is to collaborate with other companies and associations to develop their own refueling and vehicle technologies that apply the new liquid hydrogen standard and thereby establish a global mass market for the new process.