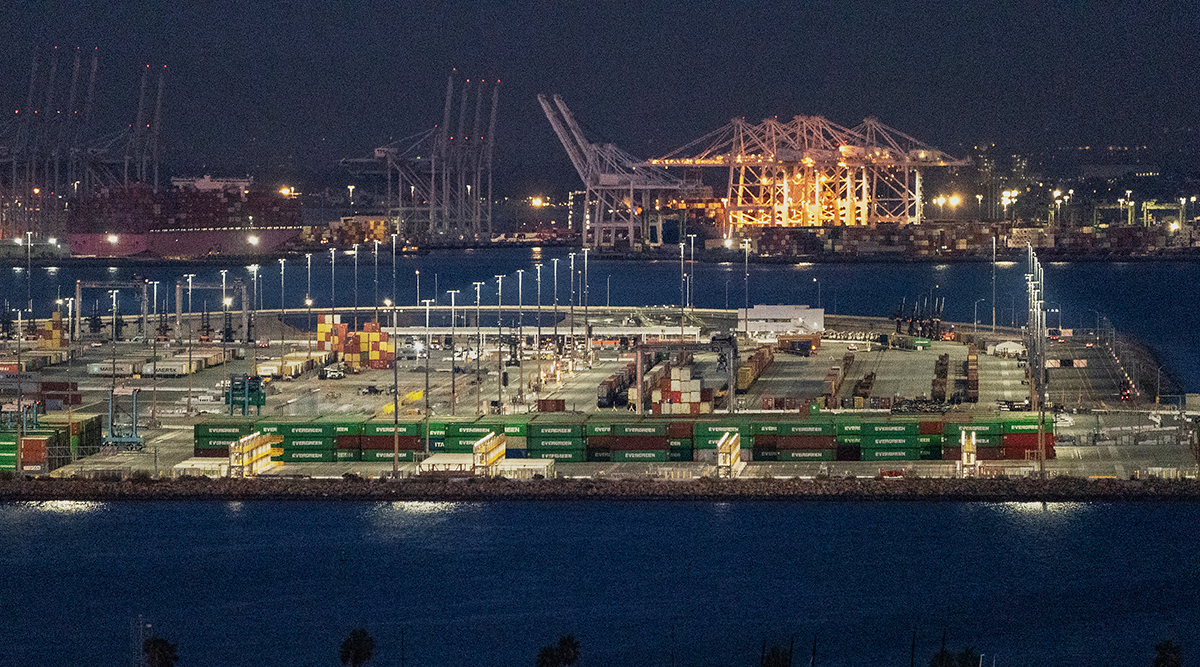 The Evergreen Shipping docks at the Port of Los Angeles. (Damian Dovarganes/Associated Press)

Back in January, 109 containerships waited off the California coast to unload cargo in Los Angeles and Long Beach, the nation’s two largest ports. Consumers, stuck at home amid the pandemic, had unleashed an avalanche of orders for goods that overwhelmed factories and ports.

Importers were paying $20,000 to send a single container from China to the United States — sometimes more than the goods inside were worth. Businesses had to backorder everything from bedroom furniture to kitchen fryers, if they could get them at all.

These days? No freighters are lingering off the Southern California coast. Containers from China go for just $2,000. Restaurants can order fryers and have them delivered in a couple of weeks.

The supply backlogs of the past two years — and the delays, shortages and outrageous prices that came with them — have improved dramatically since summer. The web of factories, railroads, ports, warehouses and freight yards that link goods to customers have nearly regained their pre-pandemic levels.

“We are in a very different place than we were,” said Phil Levy, chief economist at the supply chain consultancy Flexport. “If you ask, how long does it take to move stuff, there has been notable improvement. If you measure it by how long would it take to get a cargo from Asia to a destination port, dramatically better.”

The easing of supply bottlenecks has begun to provide some relief from the inflation that this year reached a four-decade peak, pummeling consumers and businesses. The progress has been modest and so far short-lived. Yet it’s still provided a glimmer of good news in the holiday shopping season: Gift items are much likelier to be in stock, perhaps at lower prices. The government’s latest inflation report showed that prices of toys, jewelry and girls’ apparel all fell in October.

“Supply chains are really not the problem anymore,” agreed Timothy Fiore, who leads the Institute for Supply Management’s manufacturing survey and is chief procurement officer at the transportation firm Ryder System. “We’ve had four or five months of supplies looking better. Prices have dropped, too.” 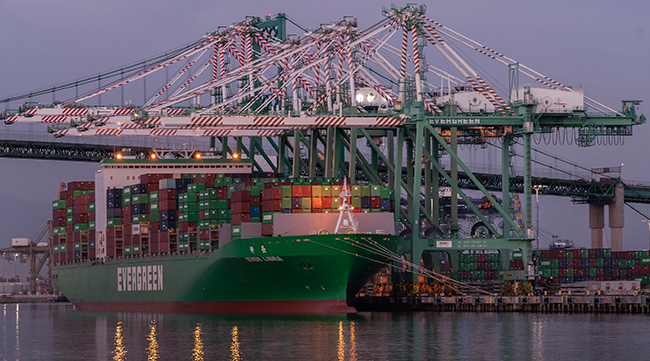 The container ship Ever Libra (TW) is moored at the Port of Los Angeles. (Damian Dovarganes/Associated Press)

The main factor behind the improvement has been diminished demand for manufactured goods. Spending on goods has fallen for three straight quarters, according to the Commerce Department. Higher borrowing rates, engineered by the Federal Reserve to try to tame inflation, have reduced Americans’ willingness to buy more physical things. Inflation itself has sapped their spending power.

And having splurged on everything from lawn furniture and sporting goods to appliances and electronic gear during the COVID shutdowns, consumers have increasingly shown a desire to venture out and spend on experiences rather than goods. Demand has shifted toward services — restaurant dinners and plane tickets, hotel rooms and entertainment. As orders for manufactured goods have slowed, so have the price pressures surrounding them.

At the sprawling Southern California ports, the shipping backup has eased, in part because companies have sent cargo to Gulf Coast and Atlantic ports to avoid delays. Port Houston says its cargo volume is up 18% from this time last year.

An index that measures demand for freight shipments had hit a high of 115 earlier this year; now, it’s below the five-year average of 53.

Overall, the shelves are full. We’re not seeing significant shortages of items. 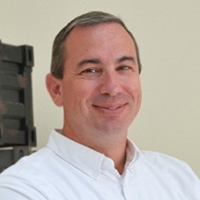 “We’re returning to the mean and the trend lines that existed pre-COVID,” said Chris Adderton, senior vice president for the Council of Supply Chain Management Professionals.

In addition to the reduced demand that has lightened the strain on supply chains, ports have become more efficient. Additional ships have increased the transportation options.

And in some industries, new producers stepped in once established manufacturers became too overwhelmed to deliver. The enhanced competition reduced shortages and helped moderate prices.

When inflation first began surging last year, economists had mostly blamed the snarled supply chains. Fed Chair Jerome Powell, echoing the views of many analysts, predicted that soaring prices would prove “transitory” and would ease once it became easier and cheaper to ship products. 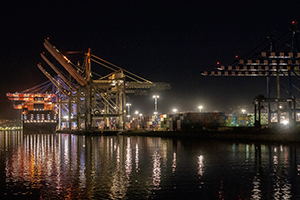 Things didn’t prove so simple — especially after Russia invaded Ukraine in February, disrupting trade in energy and grains and sending oil, gas and food prices soaring around the world.

Other problems remain, too. A chronic shortage of computer chips, for example, will likely hamper auto production into 2024, Kristin Dziczek, an auto policy adviser at the Federal Reserve Bank of Chicago, wrote in a recent paper. Though the shortage has eased slightly, factories remain slowed by a lack of chips.

The average price of a new vehicle is still near a record high, nearly $46,000, and isn’t expected to fall much, if at all, anytime soon. Used-vehicle prices, by contrast, have dropped since late summer. Analysts expect them to fall further, though not to pre-pandemic lows.

Automakers are still struggling to acquire enough chips, largely because the number of semiconductors required per vehicle has multiplied. That is a consequence of more sophisticated auto equipment, from automated safety systems and internet connections to infotainment, Dziczek wrote.

What’s more, computer chips used for vehicle production are harder to manufacture than chips for consumer electronics because they must be built to withstand heat, cold and vibration.

We’re returning to the mean and the trend lines that existed pre-COVID. 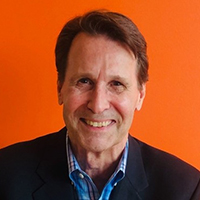 The coronavirus lockdowns in China, along with the scattered public protests against them, may still disrupt global production and shipping. The consultancy Resilinc has identified 13,800 Chinese sites — from factories to warehouses to testing facilities — that are at risk from protests, rising COVID cases and lockdowns. Potential problem spots exist in such key cities as Beijing, Chengdu, Nanjing and Shanghai.

“Parts from these regions make their way into just about every product our lives rely on day to day,” said Bindiya Vakil, CEO of Resilinc.

On Dec. 7, in a move that offered potential relief from its draconian zero-COVID policies, China rolled back restrictions on isolating people with the virus. The move will boost hopes that Beijing is scrapping its “zero COVID” strategy, which could give a lift to manufacturing and global trade.

Julian di Giovanni, an economist at the Federal Reserve Bank of New York, has estimated that supply problems accounted for about 40% of U.S. inflation from 2019 through 2021.

“In the absence of any new energy or other shock,” he said in August, “it is therefore possible that the ongoing easing of supply chain bottlenecks will cause a substantial drop in inflation in the near term.” 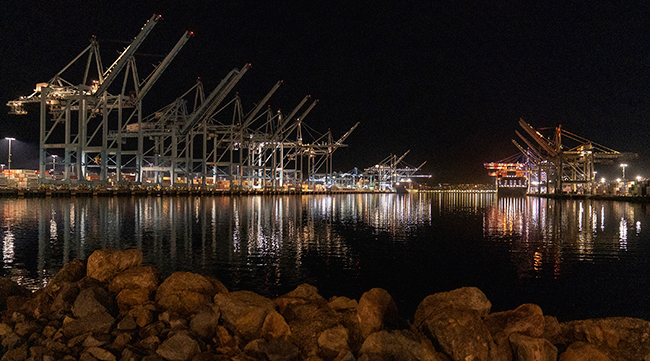 The Cam Cgm Arctic, right, is moored at the Port of Los Angeles. (Damian Dovarganes/Associated Press)

Inflation has eased from the dizzy heights it reached earlier this year. As measured by the Labor Department, consumer prices rose 7.7% in October from 12 months earlier. Though painfully high, that was the lowest year-over-year inflation since January and well below the recent peak of 9.1% in June.

A separate government inflation gauge that is favored by the Federal Reserve rose 6% in October from a year earlier. That was the mildest increase since November 2021.

The Fed wants to see annual inflation at 2%. There’s still a long way to go. And Flexport’s Levy cautions that inflation has spread from goods, which the Fed can partly control through its influence over loan rates, to services, which are more resistant to borrowing rates.

There’s also the risk that Americans expect future high inflation and will behave in ways that can make their worries self-fulfilling: They could spend more now to avoid what they expect will be higher prices later and demand bigger wage gains to compensate for a higher cost of living. All of that tends to fuel inflation pressures. 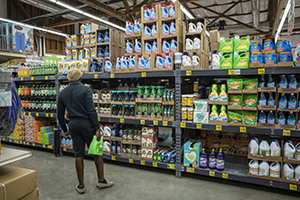 A shopper inside a grocery store in San Francisco. With supply chains easing, shelves have been stocked at American retailers, but lower demand has left many with an overabundance. (David Paul Morris/Bloomberg News)

“Once you get this stuff built in, once it sticks around for a while and everybody starts thinking about inflation as a 5 to 6% kind of thing, getting that back to 2 is tough,” Levy said.

For now, though, businesses find themselves facing a new problem, a consequence of reduced demand for goods: Rather than lacking enough products in stock to give customers what they want, they now often have too many.

“The inventory has arrived, warehouses are full and we’re scrambling to move the merchandise,” said Thomas Goldsby, logistics chairman in the Supply Chain Management Department at the University of Tennessee.

Some retailers, such as Target, ordered too much, too fast and had to cut prices to draw consumers who were tightening their budgets in response to inflation. Target’s third-quarter profit fell 52%. CEO Brian Cornell told analysts that consumers were “shopping very carefully on a budget. I think they are looking at discretionary categories and saying ‘All right, if I’m going to buy, I’m looking for a great deal.’”

“We’re not in a position where suppliers have a ton of power and the buyers just have to accept whatever they get,” said Fiore of ISM. “That’s definitely been shifting since September. Is this a good time for buyers? Absolutely. Is it a good time for companies overall? Not so clear.”