Car Mandate Proposed; Trucks May Be Next 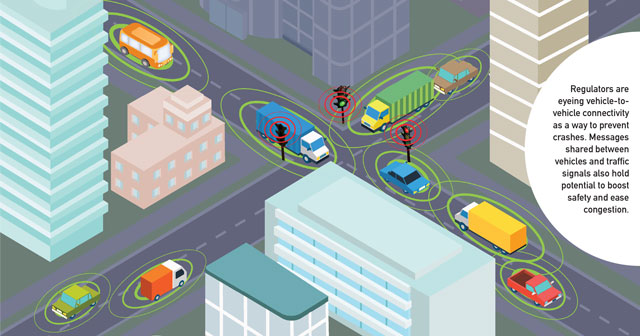 This story appears in the July 11 print edition of iTECH, a supplement to Transport Topics.

Wireless vehicle-to-vehicle communication is playing an increasingly important role in the development of more advanced vehicle automation and driver-assist features. A possible federal mandate of the technology could accelerate that movement.

V2V connectivity enables vehicles in the same vicinity to share messages with each other, with the priority on what one researcher called “imminent safety” situations — where a quick response might avert an accident.

The National Highway Traffic Safety Administration “is very interested in the potential that V2V technology has in mitigating the number of fatalities and injuries that occur as a result of motor vehicle crashes,” the agency said in an e-mailed statement.

NHTSA said it submitted its V2V regulatory proposal on light vehicles to the Office of Management and Budget for “interagency review” in January but could not estimate how long the review process would take. Public comments were considered in developing the proposal, the agency said.

Truck manufacturers and suppliers already are developing some V2V capabilities. Platooning, for example, uses V2V to synchronize braking in a tight convoy of two or more trucks, enabling shorter following distances and fuel savings for all vehicles.

At the same time, some researchers are looking into the use of vehicle-to-infrastructure communication, or V2I, as a way to improve safety and reduce traffic congestion by transmitting information between vehicles and infrastructure features such as traffic signals and road signs.

V2V communications use wireless chips to communicate over a reserved slice of radio spectrum called dedicated short-range communications, or DSRC. V2V is being developed to create “precise situational awareness” of vehicles in proximity, potentially leading to blind-spot monitoring, collision warnings and alerts when nearby vehicles engage in emergency braking.

Mike Schagrin, former manager of the U.S. Department of Transportation’s Connected Vehicle Program and now a consultant, predicted that NHTSA probably would issue a notice of proposed rulemaking for light- vehicle V2V this summer.

Researchers and analysts said the agency also is laying the groundwork for a similar proposal that one day could require V2V for heavy trucks.

“They’re going to be issuing a heavy- vehicle regulation as well,” Schagrin said.

Alrik Svenson, a NHTSA engineer speaking at the Technology & Maintenance Council’s annual meeting in March, said the agency had contracted for research on V2V and that some of that work related to heavy vehicles.

“We do expect a V2V mandate for new trucks, as the safety benefit to trucks is even greater than that for passenger vehicles,” said Josh Switkes, CEO of Peloton Technology, which aims to commercially launch a platooning system next year. “We are not reliant on this mandate, however, as our system includes the V2V hardware needed for platooning.”

More broadly, one of the challenges of V2V for commercial vehicles is achieving precise awareness of the behavior of a tractor-trailer as it moves through a curve or a turn.

“The length of the trailer is really important to understanding how it’s going to follow the tractor,” said Zachary Doerzaph, director of the Center for Advanced Automotive Research at the Virginia Tech Transportation Institute.

“Tractors switch trailers all the time, and we believe it is unreasonable to expect the drivers to remember and to reliably input trailer information, much less even know it,” Doerzaph said.

Placing a radio — a wireless chip — on the trailer was considered, but Doerzaph said that “adding that kind of expense to every single trailer out there and ensuring it doesn’t get bumped or hit or unplugged seems unpractical.”

NHTSA is working on how to measure and enter trailer length automatically, Doerzaph said, potentially with “some kind of radar, some kind of machine vision. It’s a little bit of an unknown, but I see that as one of the challenges to heavy-vehicle V2V.”

While research and development continue, telecommunications firms seeking more bandwidth for Wi-Fi are lobbying to be allowed to use spectrum set aside for DSRC. The Federal Communications Commission in June asked for input on the feasibility of sharing the bandwidth reserved for safety messages.

Ted Scott, director of engineering for American Trucking Associations, said ATA supports reserving the slice of spectrum for connected vehicles and highway safety applications “until such time as it can be shown that sharing the band will not degrade connected vehicle communications.”

That radio spectrum also figures into the development of V2I communications, in which vehicles would interact with traffic lights, street lights and traffic management systems to enhance safety, ease congestion and coordinate passage of emergency response vehicles.

Another V2I application “that could help out a lot with tractor-trailers is curve speed warning,” said VTTI’s Doerzaph. A DSRC radio placed at roadside ahead of a curve could issue an alert to a tractor-trailer that is going too fast.

VTTI has been working with the Virginia DOT, setting up servers to store data and provide access for third parties to develop V2I applications. Doerzaph said such apps could provide more tailored messages than large signs now on highways that “cost $100,000 apiece with a basic message that says, ‘Ice may be ahead.’ ” An app that could analyze data from several vehicles showing instances of “microslip” could assess that there is poor traction on a specific stretch of road surface, Doerzaph said, and send a more definitive message to approaching drivers: “Road is icy.”

Doerzaph said, “The accuracy of the information you can share and the relevance — because it’s the road you’re on — is really powerful with V2I.”

Catherine McGhee, an associate director at the Virginia DOT’s Transportation Research Council, said that by using V2I, the department can reach vehicles and drivers “wherever it needs to reach them as opposed to being tied to a physical sign location.”

The department is working with VTTI on a smartphone app that presents information in a display and through voice.

“We’re looking at modes of information dissemination that get that message across without distracting the driver,” McGhee said. “Right now, it looks like [a] voice system is our best bet, but we’re still evaluating that.”

Trucks and tunnels are an issue that McGhee sees V2I helping to resolve.

“It doesn’t seem to matter how many times we tell people what the height of a tunnel is, we still end up with trucks that try to use them that are just too tall,” she said.

Height, weight and width restrictions “are never factored into the routing in those general navigation systems,” McGhee said. “There are truck navigation systems that do include that stuff, but you have to pay for those, and a lot of truckers don’t do that.”

V2I communication could alert a driver of a need to exit and provide a safe route as well, she added.

“Just-in-time delivery could be enhanced if you’re communicating between the infrastructure and trucks,” she said. “We’re looking to get more engaged in conversation with the trucking industry” to identify ways V2I would be helpful, McGhee said.