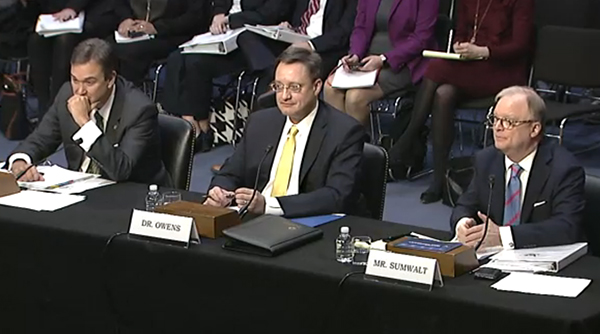 WASHINGTON — Long-awaited legislation that would set a federal regulatory framework for automated vehicles is being drafted by transportation leaders in Congress, the chairman of the Senate panel with jurisdiction over freight affairs confirmed Nov. 20.

Members of the Senate Commerce Committee are collaborating with their House counterparts on the Energy and Commerce Committee to draft a measure that would govern such automated technology, Chairman Roger Wicker (R-Miss.) said during a hearing with safety agencies. The committees have received more than 100 letters from stakeholders as part of what the chairman described as a “consultative process.”

“As we continue to develop a regulatory framework, the discussion should also be driven by the potential benefits of [automated vehicles] to improve the country’s transportation systems,” Wicker said, stressing that not having a national framework presents an opportunity for other countries to lead in the field. “As technology continues to improve, AVs will be increasingly part of our daily lives. Therefore, it is up to us to ensure that the safety benefits of these vehicles are fully realized.” 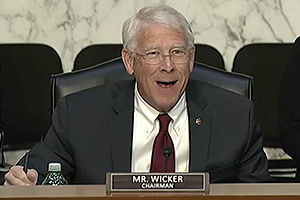 Wicker and Sen. Maria Cantwell (D-Wash.), the panel’s ranking member, emphasized that ensuring the safety of the traveling public is a priority and it will guide the legislative process for policymakers developing comprehensive legislation. The top senators also noted the National Highway Traffic Safety Administration determined that about 36,000 people were killed in roadway crashes last year.

“Over the past three years, more companies have been putting automated vehicles out on the road, and sometimes ending in fatal consequences. In several of these accidents, the drivers were not paying attention to the roadway and unable to intervene to avoid the crash,” Cantwell explained. “What we need to do is continue to learn from these lessons and make sure that we’re putting safeguards in place.”

A timeline for taking up the measure was not specified.

Taking the lead on the bipartisan legislation for the panel are Sens. John Thune (R-S.D.) and Gary Peters (D-Mich.). They have stressed the potential benefits that could be realized from deploying the technology, as well as expanding access to the elderly and persons with disabilities.

“It’s clear we’re very closely aligned on all of these issues, and hopefully we’ll be able to get some very important legislation across the line as quickly as possible,” Peters said. “This is without question probably the most transformative technology in the auto industry since the first car came off of the assembly line.”

National Transportation Safety Board Chairman Robert Sumwalt told senators that Congressional policymakers and regulators should be aware of the risks associated with automated driving systems (ADS). Sumwalt referred to a fatal accident in 2018 involving a developmental ADS operated by the Advanced Technologies Group of Uber Technologies, Inc., and a pedestrian in Tempe, Ariz.

Sumwalt went on to acknowledge the technology’s potential to either mitigate or prevent vehicular crashes.

As he put it, “A promise of the upcoming ADSes is that such systems will be safer than a human driver. Until that promise is realized, the testing of developmental ADS — with all its expected failures and limitations — requires appropriate safeguards when conducted on public roads.”

“Unfortunately, there has been an absence of safety regulations and federal guidance regarding how to adequately evaluate an ADS, which has prompted some states to develop their own requirements for AV testing,” Sumwalt added.

The National Highway Traffic Safety Administration has established the Voluntary Safety Self-Assessment Index with the aim of promoting transparency surrounding the testing and development of the technology, explained James Owens, acting administrator at the agency.

Companies that have participated in the self-assessment include Apple, Ford, Mercedes-Benz/Bosch L4-L5, Nvidia, TuSimple, Uber and Waymo.

“NHTSA understands that realizing the lifesaving potential of advanced vehicle technologies will rely heavily on consumer acceptance, and so it is vital to build public confidence through education and outreach,” Owens said. “We believe this is a crucial component to fostering transparency and understanding of these systems.”

Thune and Peters co-sponsored a bill in the previous session of Congress that proposed the establishment of a federal framework for the technology. Despite bipartisan support, a floor vote was not scheduled in the Republican-controlled Senate. The House had passed a version of the bill.

Meanwhile, nearly 50 groups have urged the congressional transportation committees to legislate on the matter. The National Association of City Transportation Officials, the National League of Cities and Transportation for America, and others, argued the measure’s focus should include safety performance standards, access for the elderly and disabled, and appropriate data sharing.

“With these overarching recommendations, we can ensure AVs provide Americans with mobility options that are safe and convenient,” the groups wrote three months ago. “Each of these groups will also share additional priorities and details beyond these shared recommendations as Congress considers AV legislation.”

NTSB Wants Tesla to Limit Where Autopilot Can Operate