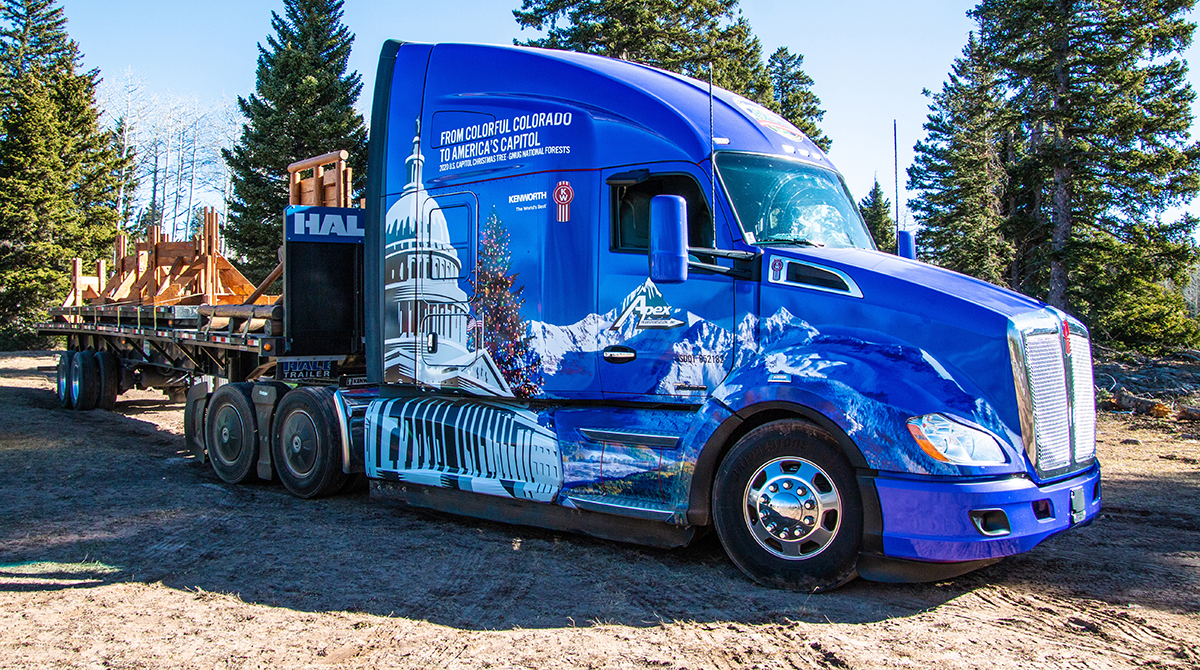 This year’s truck is a Christmas-themed Kenworth T680 flatbed equipped with a 76-inch sleeper and a Paccar powertrain featuring the MX-13 engine. The 80-foot trailer is being provided by Hale Trailer. (James Edward Mills)

Santa Claus isn’t the only one getting ready to make a delivery this Christmas. One Colorado trucking company already is feeling merry as it prepares for a special holiday haul.

Apex Transportation, founded in 1996 and based in Henderson, Colo., was chosen to haul this year’s U.S. Capitol Christmas tree from Colorado to Washington, D.C.

Apex boasts a sterling safety record and was recommended by its insurance provider, Great West Casualty Co., according to Bruce Ward, president of Choose Outdoors, a nonprofit partner that assists the U.S. Forest Service with the selection of the tree. Apex specializes in flatbed trucking and specialty transportation services. 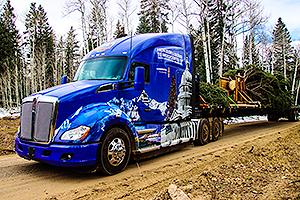 “Being selected to be a part of such a high-profile and important symbol for the American people is truly exciting beyond words for us at Apex Transportation,” said Walt Schattinger, president of the carrier, which has more than 65 trucks and almost 90 employees. He noted the company heard rumors in March that it might be chosen for the honor and learned it had officially been selected in early summer.

Every year since 1970, a national forest is picked to provide a tree for the West Lawn of the U.S. Capitol Building. This year, it comes from the Grand Mesa, Uncompahgre and Gunnison National Forests in Colorado.

The tree, an 82-year-old, 55-foot tall and 20-foot wide engelmann spruce, was harvested from the Uncompahgre Plateau on Nov. 5. On Nov. 10, it will begin a 10-town public-viewing tour — with nine stops in Colorado and one in Asheville, N.C. — before being delivered to the West Lawn on Nov. 20. The tree’s journey can be tracked at capitoltreetracker.com. 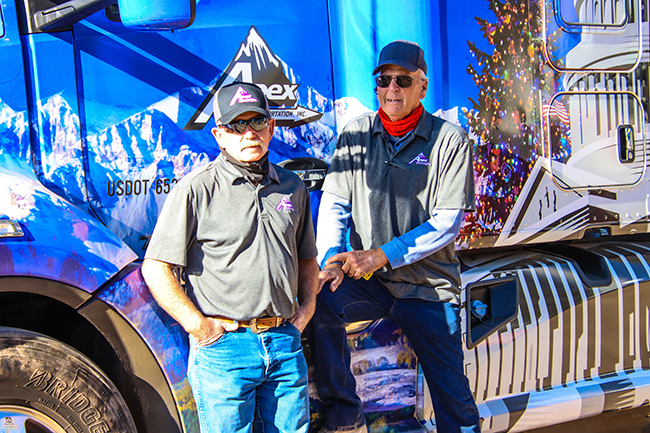 Once Apex learned it would be transporting the tree, the next step was deciding who would play the role of St. Nick and drive the truck. Schattinger said that was an easy choice.

Theron Schmalzried and William “Butch” Hanna each have more than 40 years of truck driving experience and have won numerous safety awards.

“Theron and Butch have been with Apex for a long time; they are kind of our senior guys,” Schattinger said. “Butch is more of a local driver for us, and Theron is more of an over-the-road guy for us. They’ve been stellar their whole life, so it was kind of an easy choice to pick them.”

The veteran drivers said it felt good to be chosen.

“[It feels] kind of awesome, but it kind of took me by surprise. Like, ‘Oh boy, how did this happen?’ It’s an honor, it really is,” said Schmalzried, who is 68 years old and from Sharon Springs, Kan.

“I felt really honored,” said Hanna, 62, who is from Denver. “I’ve won a couple [Colorado Motor Carriers Association] awards and then to get to do this is really neat. I’m going to work probably another two to three years and then retire, so this kind of sums up my career.”

For the seventh straight year, a Kenworth Truck Co. vehicle was picked to transport the tree across the country. This year’s truck is a Christmas-themed Kenworth T680 flatbed equipped with a 76-inch sleeper and a Paccar powertrain featuring the MX-13 engine. The 80-foot trailer is being provided by Hale Trailer. The truck-and-trailer spans about 105 feet and includes a special platform for protecting the tree.

Schmalzried and Hanna, who said they’ve worked together quite a few times, will tag-team the trip, aligning different portions of the journey with their driving specialties.

“I’m going to do all the stops in Colorado, and Theron is going to do the over-the-road driving. Makes me feel better,” Hanna said with a chuckle. 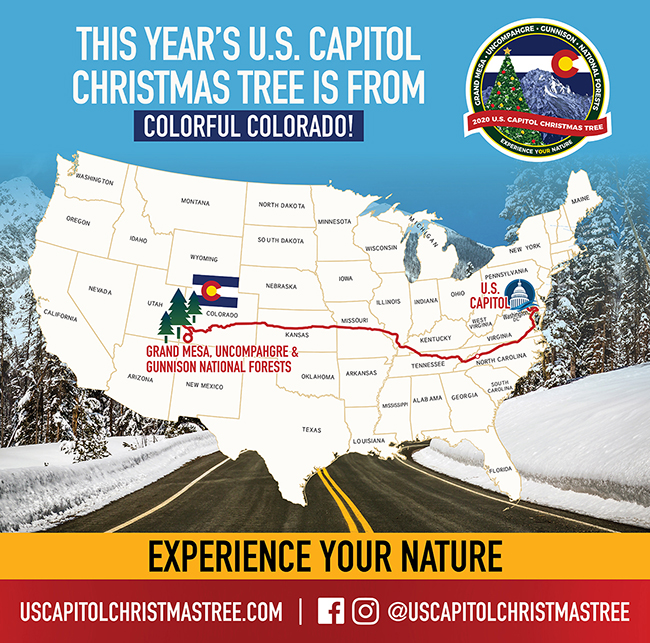 Schmalzried will meet up with the truck and tree in Denver on Nov. 14 and take it the rest of the way to Washington. Hanna will be flown into Washington on Nov. 20 so that he can be present when the tree arrives.

From a safety standpoint, Hanna wants to make sure he has enough room to park at the different stops, which include places such as fairground, a convention center and a Bass Pro Shops location.

“[I’m mostly just concerned about] having pilot cars or people who can help me watch the road and help keep cars away from me, especially when you get into a town where you need to park,” Hanna said.

“We are going to have some Apex supervisors with us through the whole thing; one of them is going to D.C. in case the driver needs anything,” Hanna continued. “We’ve got state patrol, we’ve got some guys from the Forest Service that are going to help us. So it’s going to be kind of an entourage, so that helps a lot.”

As the long-distance driver, Schmalzried also is concerned about safety, noting he is glad people will be interested in looking at the truck, but reminding them that doing so while driving around it isn’t the appropriate time.

Jodi Massey, Choose Outdoors director of communications and sponsorships, said Forest Service law enforcement will be with Schmalzried the entire way, and Capitol Police will escort him to the West Lawn on Nov. 20. 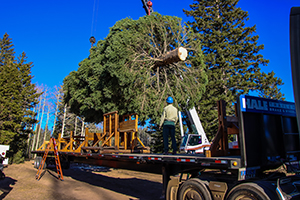 The U.S. Capitol Christmas Tree is loaded onto a special platform on a Hale Trailer. (James Edward Mills)

Schmalzried said when hauling big loads, the driver has to make sure not to become too relaxed.

“You can’t let it get too comfortable, because that’s when you get in trouble. You can’t get complacent. You have to respect the bigger loads,” he said.

As for his ultimate destination on this trip, the Capitol’s West Lawn to deliver a special Christmas tree, Schmalzried is sounding pretty jolly.

“I probably in my wildest dreams never figured I’d be doing something like this, ever,” he said. “[It’s a] once-in-a-lifetime deal, I’m sure it’ll never happen again.”