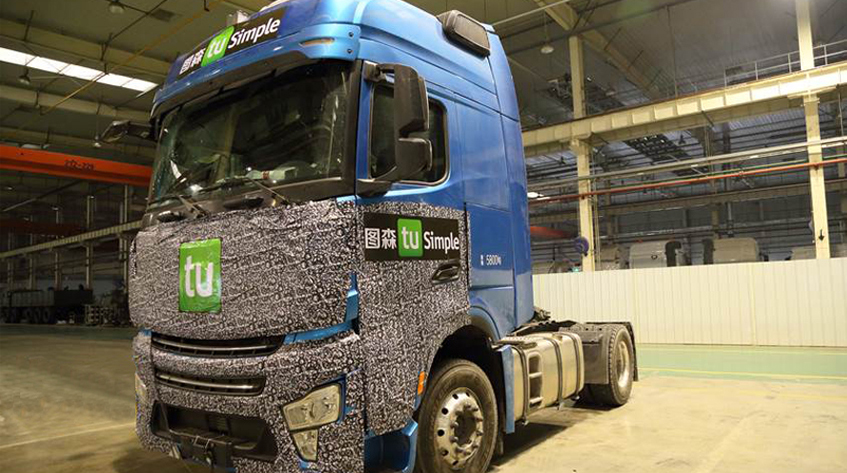 A Chinese startup company developing self-driving technology for commercial trucking has opened a facility in Tucson for research and testing — including a planned Tucson-Phoenix run with an autonomous truck.

Beijing-based TuSimple plans to spend millions of dollars and hire as many as 100 employees in the next five years, with the aim of perfecting intelligent driving systems and eventually running fleets of autonomous trucks.

TuSimple has leased 6,865 square feet of warehouse and office space to engineer and test its technology.

The company, whose arrival was marked with a ribbon-cutting ceremony with local officials on Aug. 21, also has research facilities in China and San Diego.

Xiaodi Hou, TuSimple’s co-founder and chief technology officer, said the combination of Tucson’s standing as a center of logistics and its friendly state policies toward autonomous vehicle technology helped lure the company to Tucson.

Arizona is one of a handful of states that has adopted legislation or policies supporting the testing and development for the autonomous vehicle industry.

Arizona created the Self-Driving Vehicle Oversight Committee through an executive order by Gov. Doug Ducey in 2015, and its members meet with the Arizona Department of Transportation to support autonomous vehicle research and development efforts.

TuSimple’s technology employs cameras and radar sensors with the company’s proprietary software and other data to allow trucks to “see” the road in real time, like the human eye.

The technology also can allow operators to form “platoons” of autonomous trucks that can draft on each other like race cars for optimum fuel economy.

In July, TuSimple made a successful 200-mile test run from San Diego to Yuma.

Hou said the company’s goal by the end of this year is to pilot its technology by sending a platoon of five fully loaded trucks from Tucson to Phoenix.

In five years, Hou said, TuSimple hopes to have a fleet of 25 trucks with a Level 5 system — requiring no human intervention — in commercial operation.

“In the U.S., Tucson will be our first station and I think will be the primary site for road testing for the next few years,” said Hou, who earned a doctorate in computation and neural systems from the California Institute of Technology in 2014.

TuSimple isn’t alone in its quest to perfect a self-driving truck.

Diesel truckmaker Freightliner has tested an autonomous truck with a safety driver, and rideshare giant Uber delivered a truckload of beer in 2016 on a 120-mile route in Colorado, using technology from a startup partner it later acquired.

Hou said the company has talked with truck manufacturers and has had initial talks with one leading truck maker, but the company eventually wants to develop and operate autonomous trucking fleets.

“We’re not trying to develop one black box that can perform Level 4 (driverless) autonomous driving, but we’re thinking about building an autonomous fleet of trucks,” he said.

“You can think of us more as an operations company, instead of a software company.”

Sun Corridor Inc. worked with local and state officials to provide TuSimple executives with workforce, real-estate, incentive and demographic information to show the region’s ability to support the company’s expansion.

Joe Snell, president and CEO of Sun Corridor, said local officials were “tenacious” in their pursuit of TuSimple, comparing it to the Aug. 21 solar eclipse when the “sun, moon and Earth came into alignment.”

Snell said TuSimple was lured to Tucson by its high-tech workforce, friendly regulation and infrastructure.

“We get the opportunity to be on the ground floor of a new and future industry,” Snell said. “Tomorrow’s world will include everything autonomous, from aircraft to cars and in this case, commercial delivery.

“In the very near future, as we position ourselves as a distribution center, we can see goods being offloaded in Nogales, coming up from the port of Guaymas, and those products being delivered to Tucson and beyond by delivery trucks without a driver.”

Mayor Jonathan Rothschild noted that TuSimple decided on Tucson without any upfront financial incentives, since the company moved into an existing building that is not in any special economic zone.

Rothschild said the Tucson area’s high-tech workforce and the UA and its potential pipeline of engineers helped convince the company to move here, noting that company executives already have met with leaders of the UA’s Transportation Research Institute.

The institute is a successor to the Advanced Traffic and Logistics Algorithms and Systems Center, an engineering-focused research center UA launched in 1998 to advance transportation.

Larry Head, a UA professor of systems and industrial engineering who is involved in research at the UA’s Transportation Research Institute, said he’s excited to have the startup company in town to show students the cutting edge of the science and give them new career paths.

“I already asked them to come over and talk about what they’re doing. There are going to be a lot of opportunities,” Head said, adding that Pima Community College also could help fulfill TuSimple’s future need for technicians.

Hou said the company searches for engineering talent worldwide, but he welcomes partnerships with the UA and expects to attract local engineering grads in the future.

While TuSimple isn’t getting any upfront financial incentives, the company could later qualify for reimbursable job-training grants and take advantage of a state-sponsored workforce assistance program to offset some recruiting costs, said Susan Marie, a spokeswoman for the Arizona Commerce Authority.