China Behind on Purchases in Phase One of Trade Deal 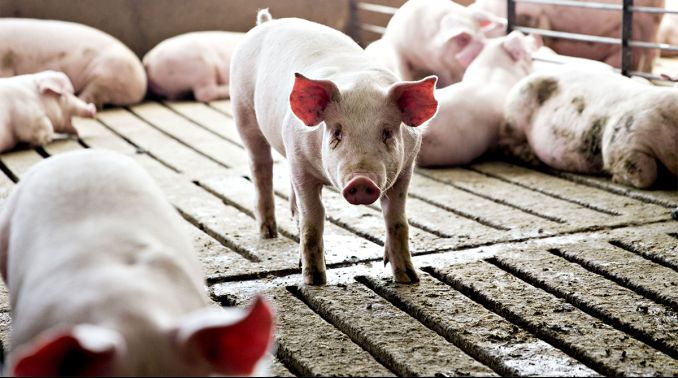 Baby pigs stand in a pen at the Paustian Enterprises farm in Walcott, Iowa. China needs pork because its own hog herd has been devastated by African Swine Fever. (Daniel Acker/Bloomberg News)

President Donald Trump’s promise that his phase one trade deal with China would provide a $36.5 billion election-year bonanza for his rural base was always a stretch. Now it looks like it may never be fulfilled.

Trump is back to bashing China. The Asian nation’s roaring economy was stalled for months by the coronavirus pandemic, cutting its demand for imports. And a plunge in Brazil’s currency is making products produced by one of the United States’ main international agricultural competitors cheaper.

“There’s absolutely zero chance” of reaching the purchase commitment announced in January when the deal was agreed upon, said Joe Glauber, the U.S. Department of Agriculture’s former chief economist. “They’re just so far behind.”

The agreement is caught in the middle of rising tensions between the U.S. and China. With anti-China sentiment rising among both parties in Congress over the coronavirus pandemic and Beijing’s treatment of Hong Kong, the president and his advisers have discussed whether to pull out of the accord. But Trump decided last week not to leave the phase one agreement, at least for now. Chinese officials haven’t indicated they would scuttle the deal.

The president on June 5 hailed the agreement as “a great trade deal,” but suggested China’s actions in dealing with the coronavirus outbreak in Wuhan has soured his outlook.

“The ink wasn’t dry on that deal when the, when the plague floated in,” Trump said. “So I guess I view the trade deal a little bit differently than I did three months ago.”

U.S. Trade Representative Robert Lighthizer said that China bought $185 million worth of soybeans earlier on June 1 and June 2. He said June 4 at a virtual event held by the Economic Club of New York that China is honoring its commitments under the pact despite the effects of the coronavirus pandemic and that he feels “very good” about further progress.

“At this point it looks to be a lot of political posturing,” said Veronica Nigh, a trade economist for the American Farm Bureau Federation, the nation’s largest general farm organization. “We’re hoping the parties can come to a place where it doesn’t endanger the phase one deal moving forward.”

Despite such optimism, there’s a long way to go. The U.S. Agriculture Department last week lowered its forecast for exports of farm goods to China by $1 billion, based on reduced demand.

The USDA forecasts based on the federal fiscal year, which ends Sept. 30, leaving out the months after the fall harvest when the U.S. most actively exports. Over the past seven years, 47% of U.S. farm exports to China were in the final three months of the year, according to Nigh’s analysis of USDA data.

But the USDA forecast amounts to $8 billion in sales to China for the first nine months of this year, meaning another $28.5 billion would be required in the last quarter to fulfill Trump’s promise of $36.5 billion for the year. The last-quarter total would be more than double the largest exports on record for that time period, $12.4 billion in 2013.

China bought $4.65 billion in U.S. farm-related products in the first four months of the year, only slightly higher than $4.3 billion in the same period last year, which came in the middle of a trade war.

A Peterson Institute analysis concluded that U.S. exports to China of agricultural products are running at only 38% of the pace set in the trade deal.

Trump, whose overwhelming support in rural areas was crucial to his narrow election victory, has courted what he calls “patriot farmers” throughout his presidency. His 2020 campaign strategy so far has emphasized maintaining enthusiasm among his most ardent supporters, especially as national and state polls show him falling further behind Democrat Joe Biden.

But the phase one deal, signed almost five months ago, has gone from a cornerstone of his re-election bid to a potential political liability as the pandemic sours the U.S.-China relationship.

Trump’s answer has been another bailout for farmers. After the president authorized back-to-back trade bailouts totaling $28 billion over two years, the administration in April announced a $19 billion rescue for farmers, using money Congress appropriated in its last coronavirus relief package. More aid is widely anticipated in the next virus spending bill Congress considers.

Although farmers’ outlook improved in May as details of the new aid package were revealed, according to the Purdue University/CME Group Inc.’s agricultural sentiment index, producers are looking to maintain their market share in the world’s second-largest economy.

Farm organizations have maintained hope that China will fulfill the deal’s terms.

“China is in serious need of reliable, affordable sources of pork,” Jim Monroe, a spokesman for the National Pork Producers Council, said in an emailed statement. The Asian nation’s hog herd has been devastated by African Swine Fever.

“We hope the U.S. and China remain in productive dialogue,” he added.

The phase one trade deal includes no public benchmarks to measure sales during the year, only the minimum purchase commitment by year-end, which will rise to over $40 billion for the second year.

The purchase commitments always looked “lofty” to farm groups and trade analysts, but that didn’t detract from enthusiasm for the deal, Nigh said.

“Everyone was and continues to be excited about the direction,” Nigh said. “There were lots of different opinions about whether the number was achievable, but everyone was pleased with the outcome.”

John Baize, a trade consultant for the U.S. Soybean Export Council, conceded “it’s going to be hard” for China to meet its purchase commitments but stressed that “it’s possible.”

“We really don’t know,” Baize said. “Until you hear otherwise, you’ve got to trust the Chinese living up to the agreement. For them to now renege on the agreement is not going to be positive for their commercial relationships around the world.”