President Joe Biden ordered broad new sanctions targeting Russia on Feb. 24 after its invasion of Ukraine, declaring that Russian leader Vladimir Putin “chose this war” and his country will bear the consequences.

Biden also said the U.S. will be deploying additional forces to Germany to bolster NATO after the invasion of Ukraine, which is not a member of the defense organization. Approximately 7,000 additional U.S. troops will be sent.

The penalties fall in line with the White House’s insistence that it would hit Russia’s financial system and Putin’s inner circle, while also imposing export controls that would aim to starve Russia’s industries and military of U.S. semiconductors and other high-tech products.

“Putin is the aggressor,” Biden said. “Putin chose this war, and now he and his country will bear the consequences.”

Biden, for now, held off imposing some of the most severe potential sanctions, including cutting Russia out of the SWIFT payment system, which allows for the transfers of money from bank to bank around the globe.

Biden announced the sanctions at the White House while Ukraine’s government reported mounting casualties inflicted by Russian forces attacking from the east, north and south.

Oil and natural prices have already surged over concerns that Russia, an energy production behemoth, will slow the flow of oil and natural gas to Europe. Biden, however, acknowledged the sanctions are “going to take time” to have their effect on the Russian economy.

He also acknowledged that the invasion, and efforts to thwart Putin, will have a cost for Americans. But he sought to reassure that the economic pain that may come with rising energy prices will be short lived for them.

As for Putin, he said, “He’s going to test the resolve of the West to see if we stay together, and we will.”

The president also met with his national security team in the White House Situation Room as he looked to flesh out U.S. moves in the rapidly escalating crisis. 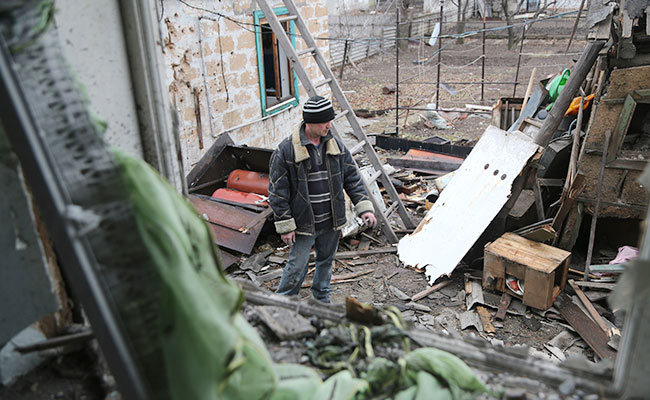 A local citizen stands between debris of his house following Ukrainian shelling in the territory controlled by pro-Russian militants. (Alexei Alexandrov/Associated Press)

While Biden described the sanctions as severe, Ukrainian officials urged the U.S. and West to go further and cut the Russians from the SWIFT financial system.

“We demand the disconnection of Russia from SWIFT, the introduction of a no-fly zone over Ukraine and other effective steps to stop the aggressor,” Ukraine President Volodymyr Zelenskyy said in a tweet.

The Biden administration, however, has shown some reluctance to cut Russia from SWIFT, at least immediately, because of concerns the move could also have enormous ramifications for Europe and other Western economies. Biden, answering questions from reporters, appeared to push a decision on SWIFT to European allies.

“It is always an option but right now that’s not the position that the rest of Europe wishes to take,” Biden said. He also contended that the financial sanctions he announced would be more damaging to Russia.

The Belgium-headquartered system allows for tens of millions of transactions daily among banks, financial exchanges and other institutions. The U.S. notably has previously blocked Iran from the system because of its nuclear program.

Officials in Europe have noted that the loss of SWIFT access by Russia could be a drag on the broader global economy. Russia has also equated a SWIFT ban to a declaration of war. And because the system cements the importance of the U.S. dollar in global finance, outright bans also carry the risk of pushing countries to use alternatives through the Chinese government or blockchain-based technologies.

“We’re all together at this point and we need to be together about what should be done,” McConnell said. “But I have some advice: Ratchet the sanctions all the way up. Don’t hold any back.”

The sanctions include targeting Russia’s two largest banks, Sberbank and VTB Bank. The U.S. Treasury Department says the sanctions overall “target nearly 80% of all banking assets in Russia and will have a deep and long-lasting effect on the Russian economy and financial system.”

Biden said the export control measures he ordered would “impose severe cost on the Russian economy, both immediately and over time.” The measures will restrict Russia access to semiconductors, computers, telecommunications, information security equipment, lasers and sensors.

White House Considering Ban on Russian Oil Imports to US