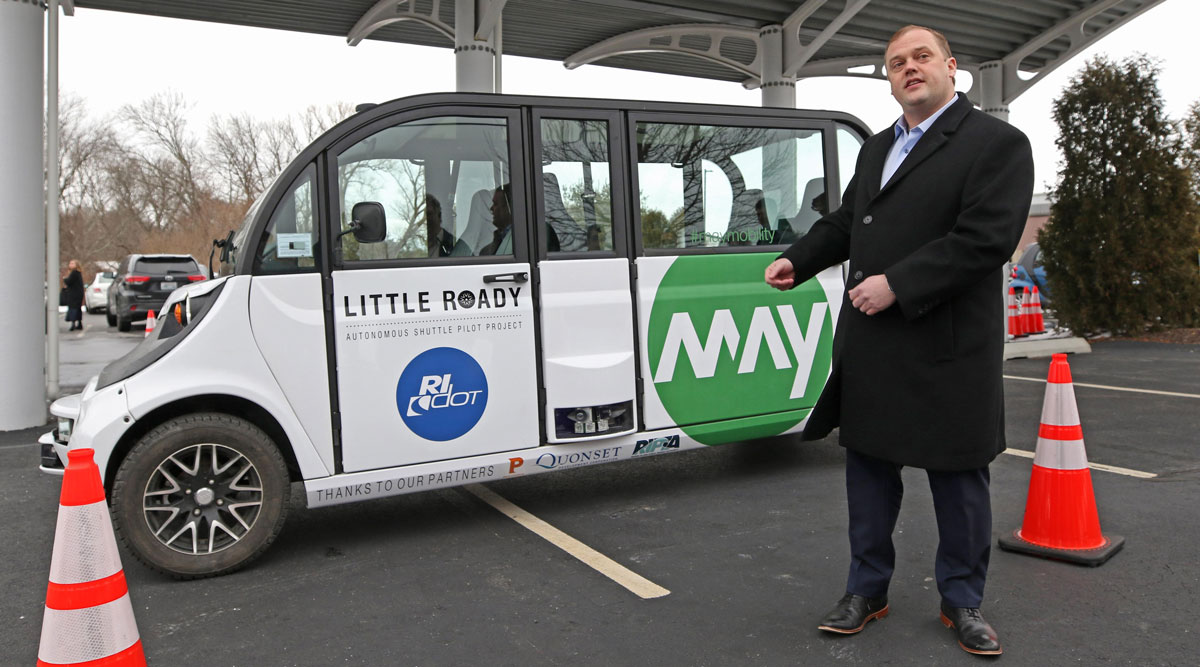 Edwin Olson, CEO of May Mobility, stands with one of the Little Roady autonomous vehicles at the project announcement in Providence in February 2019. (Steve Szydlowski/The Providence Journal)

PROVIDENCE, R.I. — Heads turn and smartphone cameras rise as the boxy, futuristic cars slip through the streets of this 384-year-old port city.

Equipped with laser sensors, video cameras and sophisticated software, the cars drive themselves — mostly — picking up passengers along a route from downtown, through an area of old textile mills resurrected as loft apartments and into a lower-income neighborhood.

The six electric vehicles known collectively as Little Roady navigate a 5-mile loop in regular traffic and steer themselves into 10 curbside stops, giving lawyers and laborers alike a free ride.

The five-passenger cars being tested here by Michigan-based MayMobility are among several autonomous vehicle experiments across the country.

The lessons learned might one day be applied in Washington state.

Bellevue offers a prime environment for AV shuttles within its downtown, perhaps by the mid-2020s. The city will add thousands of commuters as office towers rise and Sound Transit launches its light-rail to the Eastside in 2023.

“The question will be, how can we do first-mile, last-mile connections within the downtown city center?” said Steve Marshall, the city’s transportation technology partnership manager whose mission includes exploring AV services.

In the Seattle area, a collection of companies is joining in AV research. Google engineers have taken AVs for test trips in Kirkland, while Bellevue-based Paccar Inc. is developing self-driving trucks.

Carmera, based in Seattle, San Francisco and New York, uses data from video streams to help cars “see” what’s nearby. Gov. Jay Inslee chose Kirkland-based Echodyne, an AV radar supplier, as the backdrop for a 2017 executive order to promote innovation.

Some tech-industry experts have even proposed an autonomous-vehicle lane between Seattle and Vancouver, British Columbia.

The service in Providence started last spring, carrying an average of 150 riders a day.

“It is the most advanced technology anyone has seen in Providence,” raved Hector Delgado, one of the safety attendants behind the joystick in each of the vehicles, ready to take control when needed.

Rather than promise on-demand trips everywhere, which some experts say may not be feasible for decades, Little Roady follows a limited route, where onboard computers take data from the sensors and cameras to learn the lay of the land.

This kind of shuttle “could easily be replicated in the city of Bellevue,” said Loreana Marciante, senior emerging-mobility solutions engineer at the Bellevue office of infrastructure design firm HNTB.

But Marciante, a Bellevue Transportation Commission member, said she’s dubious about putting AVs on downtown boulevards, where they might hinder traffic.

One alternative is the east-west Grand Connection, a pedestrian promenade on former Northeast Sixth Street, that Bellevue hopes to stretch across Interstate 405. The city’s vision report shows an electric self-driving van sharing a lane with bicycles at 15 mph. 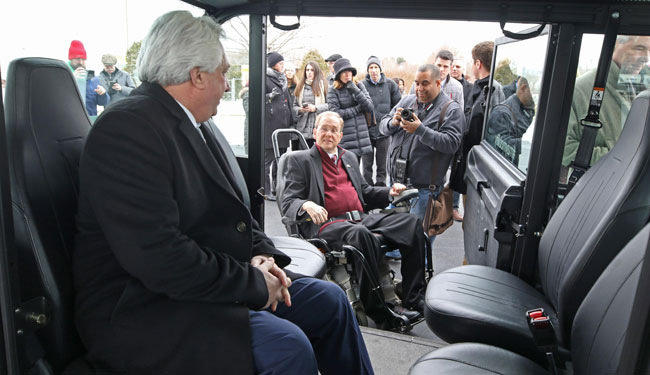 In mid-2018, Bellevue and Kirkland proposed CommutePool, in which AVs would transport people throughout the Eastside. They said rolling stock would be available because Google-affiliated Waymo had announced plans to deploy 82,000 vehicles, and GM said it would sell AVs by 2019.

But the industry tempered its forecasts after an attended, self-driving Uber killed a pedestrian in Arizona in 2018. The Eastside cities failed to win a $12 million federal grant for CommutePool.

SeaTac’s City Council has voted to approve a self-driving car strategy that could connect light-rail stations and neighborhoods. Local advocates also discuss the Renton Landing area as a potential site for AV shuttles.

The back-seat view from Little Roady, during two frosty days last month, shows how far the technology has come — and the daunting path ahead.

Safety attendants control the cars about 30% of the time, said Peter Alviti, director of the Rhode Island Department of Transportation.

“It’s a good test bench, because it provided a wide array of Rhode Island streets,” he said. “I’m pleasantly surprised at how safe and highly functional they are.”

The state reports nine noninjury incidents since the pilot project launched in May, such as curb strikes or cars bumping AVs from behind.

The AVs can steer clear of taxis at the Amtrak station, stop for a downhill traffic light under a freeway, slow for speed humps in a school zone. They find their way to the appointed stops, then find openings to re-enter the traffic lane.

“This is awesome. It takes off the extra walk, especially during the cold weather,” said John Dias, a carpenter headed to work fixing old boats. He can sense autonomous mode, because the car feels led by a rope.

“You can tell because it pulls itself along,” Dias said. “You can talk to the driver, they get to be more conversational, because it takes care of itself.”

The cars are sometimes flummoxed by what they’re seeing. A Little Roady in December halted when sunrise glare bounced off another car. Later that day, vehicle exhaust ahead stopped an AV when a traffic signal turned green. The lasers can perceive rain and snow as a fusillade of solid objects.

“That’s one of the beauties of operating in places like Rhode Island,” Malek said during a ride. “And that data helps us to validate our software, to make sure we understand what we’re seeing, and can actually pull out the ‘noise’ from what we are seeing.”

She anticipates using radar to help the software distinguish droplets from objects.

Because they obey speed limits, Little Roady cars are constantly honked at or passed.

“We’ve learned a lot about human drivers in Providence since we launched, and they are exceptionally aggressive,” Malek said.

Celebrating 200k rides that get people where they need to go safely, easily, and with a lot more fun. #sharedmobility #maymobility #autonomous #electricvehicle

On a midday trip, a driver rolled through a stop sign from the side street, blocking Little Roady while it cruised at 22 mph. Lasers in the AV’s nose took a couple of seconds to detect the obstacle, before the vehicle braked a car length short of impact. To move again, the attendant seized control with the joystick. Down the road, the dashboard flashed an encircled A, to resume autonomous driving.

The AV software needs long gaps between cars to merge, so safety attendant Delgado took over while turning from a parking lot to a busy road. To relieve congestion one afternoon, attendants were instructed to use manual mode for an hour and go the max 25 mph, so they wouldn’t hinder faster drivers.

Left turns against traffic present a challenge. Is that oncoming car going 25 mph, or 50 mph? To be safe, the attendants tackle busy left turns.

Malek predicts MayMobility vehicles will be fully autonomous in 2020s, in limited corridors. Asked if 2023 or 2024 sounds realistic for driverless circulators in Providence, Grand Rapids or even Bellevue, she answered, “Depending on the road network, we may be able to do it sooner than that.”

‘Many, many years to come’

Some AV companies aim to create robo-taxis that go wherever customers want, a more ambitious goal. In Las Vegas, Lyft and its partner Aptiv say they have surpassed 95,000 attended AV rides, while Waymo claims 20 million miles of test trips within several states.

Ubiquitous AVs that go everywhere may not be realistic until 2075, University of California-Berkeley, research engineer Steven Shladover warned in Scientific American. 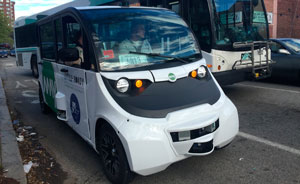 A Little Roady vehicle operates in Providence, R.I., in May 2019. (Matt O'Brien/Bloomberg News)

“The last 1% of conditions are going to be very difficult,” Marciante said. “You won’t see them on the road for many, many years to come, because they don’t visualize what’s ahead as well as human drivers do.”

She predicted completely self-driving vans will arrive in 2021, in Jacksonville, Fla., replacing a worn-out monorail corridor, the simplest possible route, in an HNTB-affiliated project.

As AVs develop, there may be an interim phase of driverless cars that halt when confused, until a remote-control operator at a maintenance base temporarily takes over, she said.

In Seattle, engineers and coders at Carmera strive to bring the driverless future in years, not decades. To help AVs interpret complex environments, the company develops maps and rapid software updates, aided by constant feeds from the in-car cameras and GPS satellite data.

“It’s trying to replicate what people do, when you’re driving in an area you know really well,” Chief Product Officer Ethan Sorrelgreen said.

He sees no need to settle for fixed routes, if the AV databases become rich enough.

Carmera is mapping 750 road miles in a Florida retirement community for a driverless taxi network.

Some experts question whether the tests in Providence can foretell the future.

“Assuming there’s 3.2 trillion miles a year we travel in North America, that loop in Rhode Island is a pretty small thing,” said Bern Grush, a Toronto-based co-author of The End of Driving, with Seattle transportation researcher John Niles.

“The real question is, how are we going to figure out to use them, when they do work?” he said. “The only thing that makes them reasonable or unreasonable is whether we’ve groomed the area for them, including places to load and unload.”

Larry Chretien, executive director of Green Energy Consumers Alliance in New England, wonders who will invest in AVs, and who will ride. “Does it depend on somebody’s government, or will someone put private equity at risk?” Chretien asked.

“Little Roady is a fine little experiment, but does it tell us where we’re going to be 10 years from now? I doubt it,” he said.

In one vision, self-driving cars would go where and when you like, zipping safely close together, boosting road capacity.

Four-, six- or eight-person AVs will be so convenient that Sound Transit’s light-rail expansion “will be obsolete before it’s built,” said Bryan Mistele, CEO of Kirkland-based traffic data company Inrix.

Another approach would regulate and subsidize AV trips. Rides should be affordable to all and complement mass transit, bicycling and walking, former New York City Transportation Commissioner Sam Schwartz writes in his book “No One at the Wheel.”

“What is good about AVs can be promoted and expanded if we prioritize people over vehicles — not the very opposite, as we did last century with the advent of cars,” he writes.

The outreach appears minimal. Little Roady is mainly an engineering test run on a small budget. They don’t spend truckloads of money like Seattle for public relations campaigns.

The greatest revelation in Providence may be its laser-focus on access for all. MayMobility thinks ridership will double as word spreads.

The state required Little Roady to stop in Olneyville, a low-income neighborhood full of bodegas and affordable-housing projects. It’s still home to Mars Plastics, where the first Star Wars figurines were molded in the 1970s, and a classic wiener restaurant.

Peter Woolley, a building-maintenance worker, waved to his boss out the AV window after joining friends for breakfast three stops away. “My bills are low, my rent’s pretty low and I don’t drive,” he said. “It’s convenient, I love it. I can go to the mall, the train station.”

People there commonly catch a free ride to the nearest big grocery, a mile away.

“We’ve made a lot of people’s day, a lot of people happy,” safety attendant Derrick Perry said. “There’s a lot of poverty down there. It has a lot of veterans, a lot of disabled people. That’s the best feeling, is connecting people. The walk to PriceRite is long and stressful. This is literally a lifesaver.”

Like other tools, self-driving cars are only as useful as the work they perform.