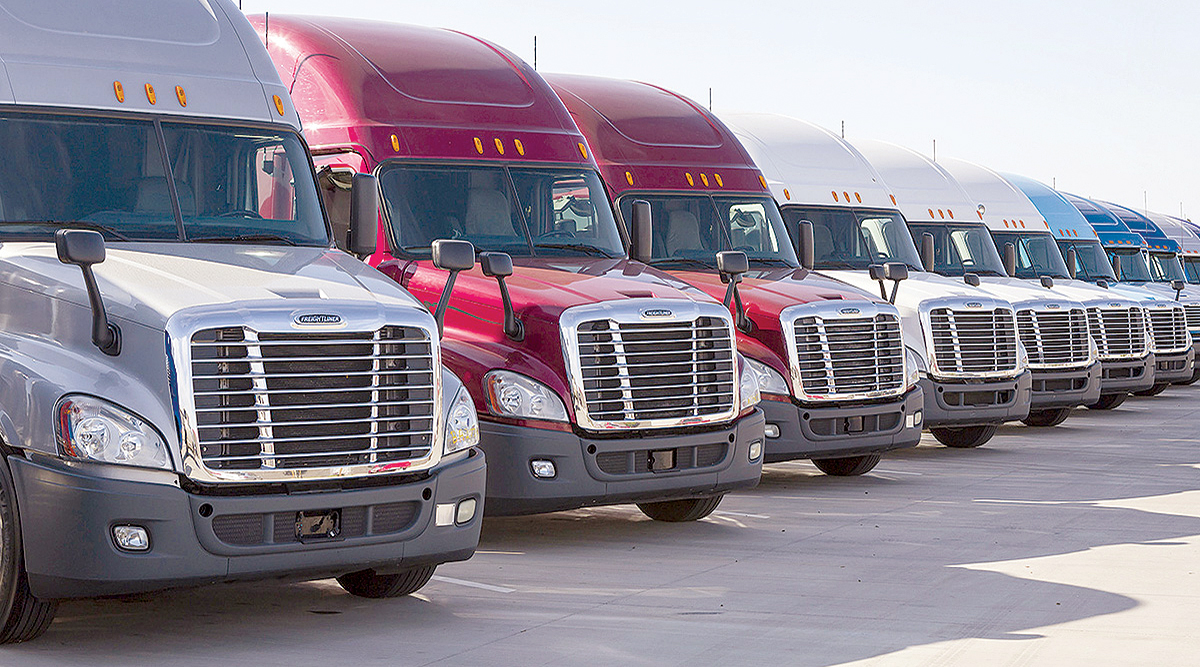 Class 8 Freightliners on a sales lot. Freightliner tallied 7,266 sales, down 3.6% from a year earlier, but that figure still represented a leading 41.1% market share. (Freightliner)

As the goods-based portion of the economy gained momentum amid the pandemic, sales of new heavy-duty trucks reached 17,685, according to Wards. Still, that was down 24.6% compared with 23,466 a year earlier when sales had posted the first year-over-year decline in a little more than two years.

He said the year-to-date decline is in line with ACT’s expectations for 2020 sales.

“If the economy doesn’t fall apart from here, this has got to be extremely bullish sign for carrier profitability and, by extension, Class 8 demand,” ACT President Kenny Vieth added.

Meanwhile, ACT is not expecting consumer spending, which typically accounts for 70% of economic growth, to come back fully until the third or fourth quarter of next year, Tam said.

August’s sales are progressing up at a decent rate, said Don Ake, vice president of commercial vehicles at FTR. “It is a nice recovery from where the bottom was.” 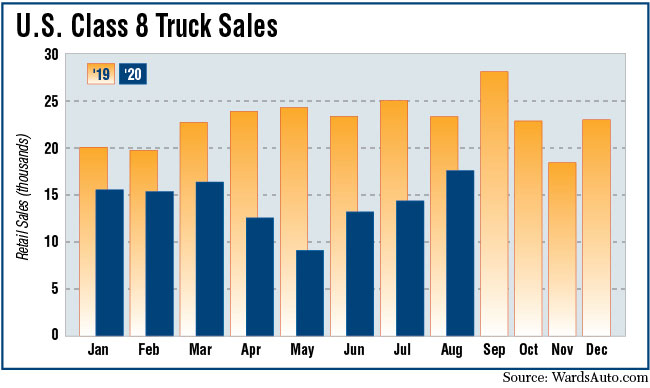 Ake added that there is still too much inventory on dealers’ lots and that is going to be a drag on production.

All truck brands in August posted year-over-year declines, with all but one declining by double digits.

Freightliner, a brand of Daimler Trucks North America, notched 7,266 sales, down 3.6% from a year earlier.

Western Star, also a DTNA brand and made in Portland, Ore., had 434 sales, down 30% compared with a year earlier.

Multiple wildfires have burned in the metro Portland area this month, part of a conflagration in the West.

“Due to the intensity of wildfire smoke and resulting impact on air quality, for the health and safety of our team members, our truck manufacturing plant in Portland, Ore. is closed through Sept. 16. Normal operations are expected to resume on Thursday, Sept. 17 and delayed order production will be quickly regained,” DTNA wrote Sept. 15 in a statement to Transport Topics. 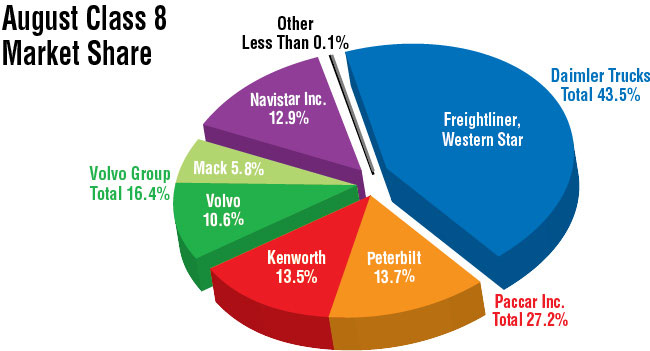 “Peterbilt has seen a nice rebound and continued improvement in demand across many segments since early June. We have seen higher-than-normal order intake as a percent of the industry since that time, which is beginning to show up in retail sales results,” said Peterbilt General Manager Jason Skoog.

Kenworth Truck Co. was next with 2,385, a decline of 38.7%. Peterbilt and Kenworth are brands of Paccar Inc.

International had 2,279 sales, off 33% compared with a year earlier. International is a brand of Navistar Inc.

Volvo Trucks North America had 1,871 sales, off 27% compared with a year earlier.

“The market came in stronger than expected in the U.S. and as expected in Canada, and it appears the market is recovering well from a very poor second quarter,” said Magnus Koeck, vice president of strategy, marketing and brand management for VTNA. “The longhaul segment is bouncing back and we expect to see continued strength throughout the year. Dealer inventory levels have normalized, enabling a significant uptick in orders. Our customers continue to appreciate our products for their fuel efficiency benefits along with class-leading safety features and connectivity services, and we look forward to a strong finish in 2020.”

“Mack’s year-to-date results through August have been driven by stronger demand for our trucks across all heavy-duty segments of our business, allowing us to recall roughly 230 employees from general layoff at our Lehigh Valley Operations manufacturing facility,” said Jonathan Randall, senior vice president of North American sales and commercial operations at Mack Trucks.

Randall added that uncertainty remains about how the coronavirus pandemic and heavy-duty truck market will evolve in the future.

VTNA and Mack are units of Volvo Group. 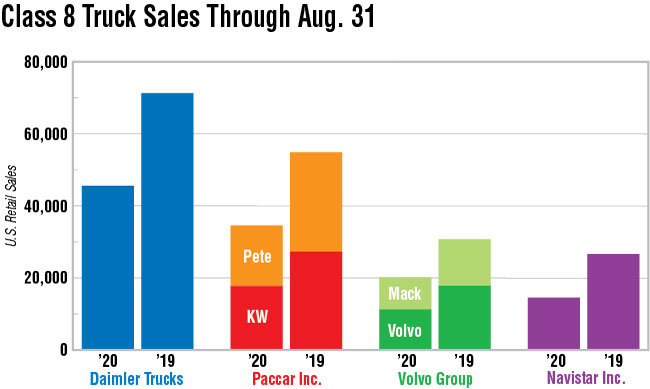 “We have seen an improvement in demand to start the third quarter and have performed very well in bid season. Due to our execution during bid season, we plan to grow our fleet by 3,500 containers and over 200 tractors,” Hub Group President Phillip Yeager said in the diversified carrier’s latest earnings call.

The new tractors offer opportunity to generate a strong return by refreshing some older higher-cost models, according to the company.

Hub Group ranks No. 12 on the Transport Topics Top 100 list of the largest for-hire carriers in North America.

ACT has said the pandemic drove some drivers out of the industry and sidelined others whose reentry is slow.

Yeager said he felt Hub would be able to add drivers.

“We feel very good about the value proposition that we bring to drivers. They’re home every night,” he said. “We help them make a very strong living and support them.” he said.