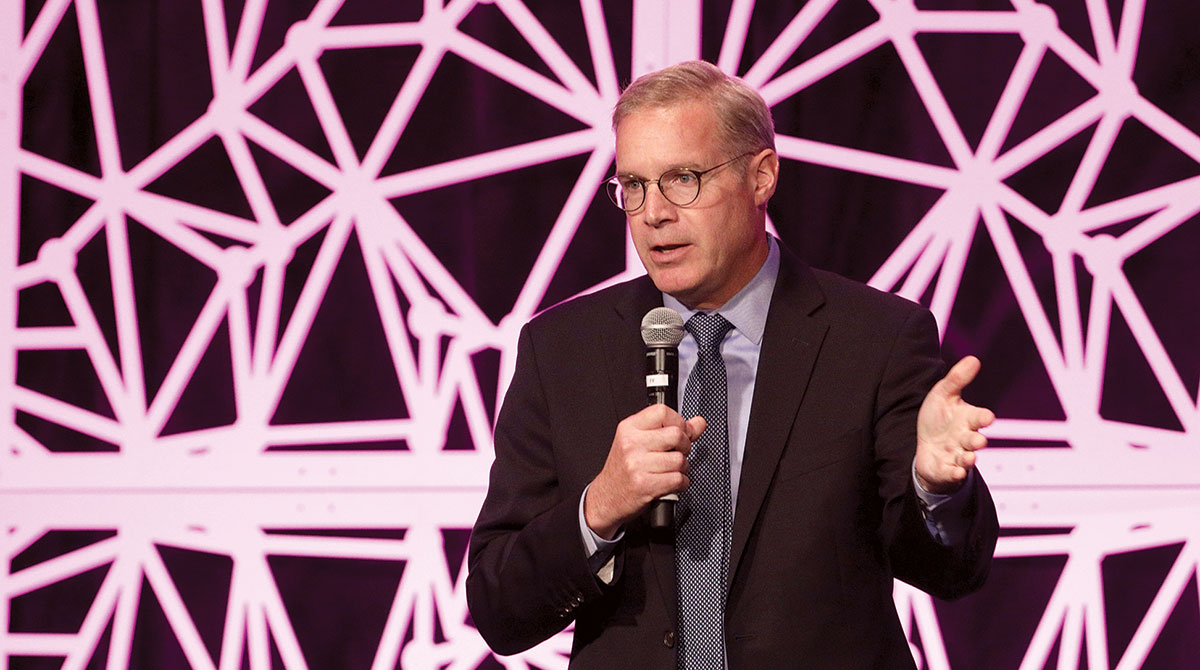 NASHVILLE, Tenn. — American Trucking Associations President Chris Spear praised the bipartisan work that carried a federal infrastructure package across the finish line, and stressed that his group will always put issues ahead of politics

“It wasn’t a difficult decision for us to support that bill,” Spear said of the Infrastructure Investment and Jobs Act during a wide-ranging address at the 2022 Recruitment and Retention Conference, held here from June 1-3 and hosted by Conversion Interactive Agency, ATA and Transport Topics. “Not just the funding, but the certainty it gives to states around the country that now have five years of certainty. The funding coming in is guaranteed. That 38% increase allows them to do major projects. Bypasses, bridges — major investments, not just patch and repair.”

The IIJA, signed by President Joe Biden last year, provided $1 trillion in funding for infrastructure projects such as rebuilding roads, bridges and rails.

Spear noted that addressing the needs of roads and bridges nationwide should not be a political issue.

“You have to be for something that helps our country and our industry grow,” Spear said. “I can think of no better issue than infrastructure. Roads and bridges aren’t political. They’re not Republican or Democrat. We all drive on them. Since when is a slab of asphalt a political threat?”

On the political front, Spear stressed that while ATA may not agree with the White House on every issue, the group will always place addressing the needs of motor carriers first.

“What are we supposed to do? Just sit back and take four years off, not work with these people? We let our issues drive our response, not the politics,” he said.

Still, he noted the challenge of marshaling lawmakers’ attention and effort. “I can tell you, trying to educate our elected officials is getting harder,” Spear said. “Not because they’re not retaining what we’re telling them that they need to do. It’s generating the will to do something about it.”

Ultimately, though, he stressed that the effort is worthwhile. “Democracy thrives, the institutions are there,” he said. “Our ability to get things done hasn’t changed.”

Going forward, Spear said the industry can look toward a lot of road projects getting underway. Within three years, he believes this will lead to improvements in efficiency and cut down on the time truckers spend in traffic. He noted it will result in environmental gains but cutting down on trucks sitting idle in gridlock.

“There’s something in this bill for everybody,” Spear said.