One day after an election that left control of both houses of Congress uncertain hours after polls had closed, calls for change in how the Biden administration is guiding the nation arrived from the highest levels of Republican leadership.

“Republicans are ready to deliver,” said Rep. Kevin McCarthy (R-Calif.), who was expected to gain his caucus’ endorsement for the speakership in the event the House claimed control of the chamber. McCarthy offered remarks to supporters the evening of the elections. “It’s a new direction toward an economy that is strong. Where you can fill up your tank, feed your family. Where your paychecks grow, and not shrink.”

As of Nov. 9, the day after voters went to the polls, GOP candidates had won nearly 200 House seats nationwide, just shy of the 218 requisite to secure management of the affairs in the chamber. Democrats had claimed 175 contests as of Transport Topics’ publishing deadline. 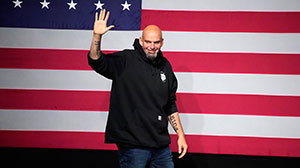 “The American people are ready for a majority that will offer a new direction. That will put America back on track,” McCarthy added.

Specific to freight matters, as the White House continues to implement a $1 trillion infrastructure law, GOP members have expressed interest in increasing oversight of the Biden administration. Agencies tasked with managing newly approved funds for big-ticket infrastructure projects, such as the Federal Highway Administration, are expected to receive a higher degree of scrutiny. A Republican majority in the House would lead to changes in leadership on transportation-centric panels.

This year, Republican transportation policymakers have taken issue with a memorandum from the Federal Highway Administration that suggests state agencies prioritize maintenance of infrastructure projects rather than proceeding with new projects. This so-called “fix-it first” strategy was endorsed by senior Democrats on Capitol Hill as well as the Biden administration.

Over the summer, Rep. Sam Graves (R-Mo.), the House transportation committee’s top Republican, shared his concerns over the memo with Transportation Secretary Pete Buttigieg. “I hope you recognize the fact that it remains a serious source of concern and confusion because it pushes the administration’s own priorities, including a bias against adding new highway capacity, over what’s written in the law itself,” said Graves, his caucus’ front-runner to lead the panel under GOP rule.

The committee’s leader during the last Congress, retiring Rep. Peter DeFazio (D-Ore.), and other senior Democrats have defended the FHWA’s guidance. “We want people just to think these things through,” DeFazio said at a hearing with the secretary. “It’s not a mandate, but think about it as you move forward, instead of, you know, doing the same thing again and again and again — which doesn’t work.”

Leading up to Election Day, Democratic candidates, President Joe Biden and members of his Cabinet traveled to various congressional districts to promote potential benefits stemming from the infrastructure law. Such benefits, they argued, include enhancing rural broadband internet, expanding electric vehicle capacity and reinforcing supply chain connectivity. “We have, literally, a great deal of money to make ours a more modern infrastructure,” Biden said Nov. 3 at a campaign event in San Diego.

Democratic leaders had expressed optimism as they touted their roster of candidates nationwide. House Speaker Nancy Pelosi (D-Calif.), who predicted a major win for her party this fall, recently re-emphasized her support. “We have great candidates who have confidence and courage to run because they believe — they know why they’re running,” she told PBS on Election Day.

“And they know,” Pelosi continued, “that our democracy is at stake, our planet is at risk, but also that you win these elections on the kitchen table issues.”