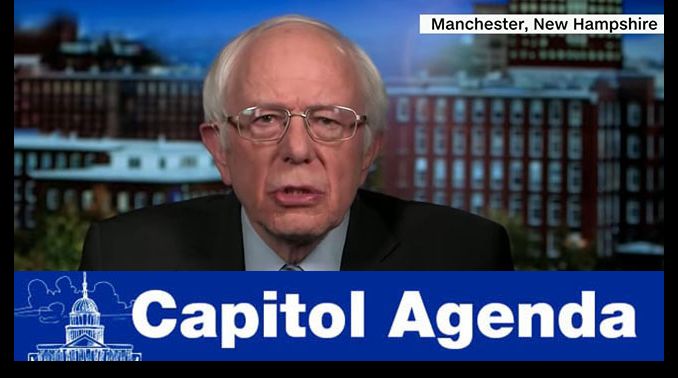 In 2017, Sanders joined Senate Democrats in supporting the Blueprint to Rebuild America’s Infrastructure plan, which called for a $1 trillion investment in infrastructure. (CNN via YouTube)

Since their “victories” in the Iowa caucuses, Sen. Bernie Sanders (I-Vt.) and former Mayor Pete Buttigieg rarely have mentioned their proposals aimed at repairing the country’s networks of roads and bridges.

Sanders occasionally has insisted on the need to repair potholes and improve freight connectivity at the debates leading up to the caucuses, remarks that borrow from aspects of a $1 trillion proposal he promoted in the Senate years back.

Buttigieg’s campaign has focused understandably on attacking Trump. As a newfound frontrunner, he’s gone into hyperdrive on defending his record as mayor in Indiana. In his ambitious $1 trillion infrastructure plan, the former mayor stopped short of presenting a meaningful fix for the looming insolvency of the Highway Trust Fund.

“Pete will inject $165 billion into the fund to ensure that it remains solvent through 2029,” according to his plan. “He will require his [U.S. Department of Transportation] to propose a new and sustainable user fee-based system, such as a vehicle-miles-traveled fee with appropriate privacy protections that is already being piloted by states and can potentially replace the gas tax.”

Like Sanders and Buttigieg, the rest of the Democratic field of presidential aspirants struggles to spell out a solid fix to ensure the fund’s long-term solvency. The fund, backed by insufficient revenue from the federal gas and diesel tax, helps states with maintenance and repairs. Projections point to its insolvency in less than two years absent a significant boost.

Republicans also struggle with the trust fund. During the State of the Union address, President Donald Trump didn’t talk about funding. He instead pointed to the transformative highway policy proposals that a Senate panel approved last year. That legislative effort updates programs of a 2015 highway law, and it lacks a sustainable funding plan for the fund.

To be fair, Trump’s fiscal 2021 budget request to Congress unveiled Feb. 10 called for a $1 trillion investment that “emphasized the critical importance of rebuilding and modernizing the nation’s infrastructure.” (Congress would need to sign off on his budget request.)

“All across the country, Democratic leaders are rebuilding bridges, fixing roads, expanding broadband and cleaning up drinking water,” Whitmer explained. “Everyone in this country benefits when we invest in infrastructure.”

Feb. 11, 12 p.m.: The Youth Development Institute of Puerto Rico hosts a discussion titled, “A Future of Child Poverty in Puerto Rico: How Much It Costs and What Can We Do About It.”

By not proposing pay-fors for national highway projects, neither Congress nor the president have presented meaningful plans to revitalize the country’s transportation networks.

Legislation that would facilitate the ability to unionize was advanced in the House, which Democrats control. The GOP-led Senate has not scheduled its consideration.

In a letter to the Federal Communications Commission on Feb. 5, American Trucking Associations President Chris Spear criticized the agency’s push to change its spectrum allocation: “The proposal seems predestined to ultimately result in a full takeover of the band for unlicensed use.” Last year, FCC adopted a notice of proposed rulemaking with the objective of assessing the 5.9 GHz band rules.

An all-hands-on-deck approach from the first family has been activated on the road to the White House 2020.

The economy is the best its been in my life and I'm not that young. January's jobs report showed:

Instead of wanting to heal our country and fix our country, all they want to do — in my opinion, it’s almost like [Speaker Nancy Pelosi, Sen. Charles Schumer] want to destroy our country.

Biden to Tout Infrastructure in State of the Union Address