ZF Showcases Steering Assistance as Next Advance in Truck Safety 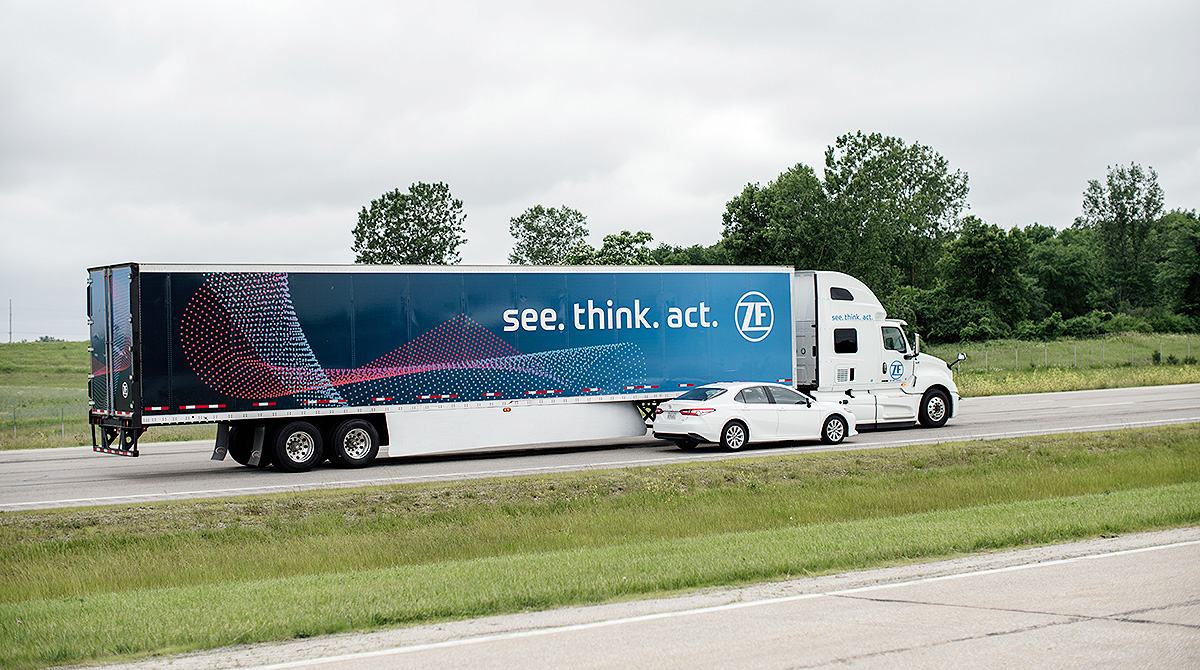 ZF showcases its lane-change assist feature, which uses vibration at the steering wheel to warn the driver and prevent accidents caused by lane changes. (ZF Group)

EAST LIBERTY, Ohio — ZF Group recently showcased its latest automated steering technology, offering a preview of the next advances in driver assistance that will soon become available in commercial trucks.

The component supplier demonstrated a range of active steering functions and also shared its vision for more highly automated trucks June 12 here at the sprawling proving grounds of the Transportation Research Center.

Getting a feel for the OnTraX lane-keeping assist function from @ZF_Group on a test track at the Transportation Research Center in Ohio. pic.twitter.com/Fhw7YqIdLT

During the ride-and-drive event, ZF allowed members of the trade press to test its OnTraX lane-keeping and lane-change assistance capabilities for tractor-trailers on the independent testing facility’s 7.5-mile oval track.

Much like the lane-keeping features available in many passenger cars, ZF’s lane-keeping assist uses automatic steering corrections to nudge the truck back into its lane when it starts to drift over lane markings without a turn signal.

However, the feature does not keep the vehicle centered in its lane automatically. The driver remains firmly in control, and the system intervenes only when the vehicle begins to stray from its lane.

Riding along in a demonstration truck as it performs an autonomous yard move at @ZF_Group’s press event in Ohio. pic.twitter.com/heXAd36fx5

“The driver is always in charge,” said William Sanchez, a systems engineer at ZF. “This is just to help the driver. We’re not going to drive for them.”

Another safety feature, lane-change assist, incorporates radar sensors mounted on both sides of the truck to monitor vehicles traveling in its blind spots. When the truck driver attempts to move into an adjacent lane that is occupied by another vehicle, the safety system warns the driver by vibrating the steering wheel. The warning activates only when the driver puts on the turn signal and starts to move toward the next lane while another vehicle is present in that space.

By warning the driver with haptic feedback on the steering wheel, the lane-change assist system reduces the need for beeps or other auditory alerts used by many of today’s active safety features.

“We want to help the driver. We don’t want to annoy them,” Sanchez said.

ZF’s lane-keeping and lane-change features are enabled by its ReAX electronic steering system, which the company said will enter production for commercial trucks in 2020. ReAX works in concert with hydraulic steering to improve safety and make vehicles easier to drive.

Looking further ahead, ZF shared its perspective on the future of truck safety technology. 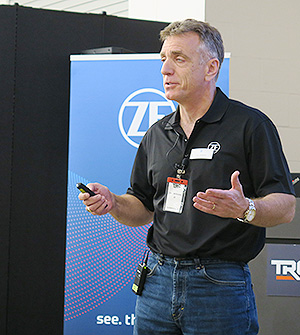 Williams cited technology companies such as Waymo and TuSimple as examples of the path aimed at bringing about a revolutionary change in autonomous driving.

But many other industry players are pursuing a slower pace by starting first with lower levels of automation.

“That seems to be an approach that a lot of our customers, especially the traditional customers, are comfortable with,” Williams said. “It’s the conservative approach where you build credibility and build confidence with the end user as you become increasingly complex.” 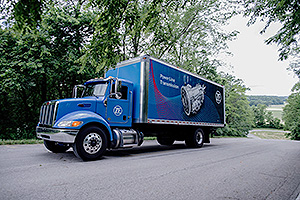 For an example representing the latter, the supplier presented an automated driving demonstration in which a Class 8 tractor simulated an autonomous yard move. The truck used GPS to follow a set route with no driver input.

The demonstration truck was equipped with two separate ReAX steering units to help provide the system redundancy required by highly automated vehicles that can no longer rely on the driver as a fallback. 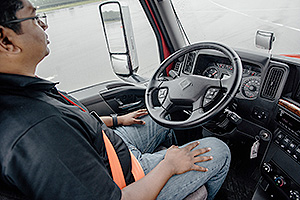 Ananda Pandy, technical specialist for ADAS and autonomy at ZF, said this level of redundancy becomes necessary for SAE Level 3 and 4 automated driving, in which the driver may be fully disengaged from the driving task.

The self-driving truck also was equipped with the company’s Nvidia-based ProAI computing platform to provide the extensive processing capacity needed for autonomous driving.

That 8-speed transmission offers torque capacity up to 1,000 pound-feet and will be available across the medium-duty range and for light Class 8s, or “Baby 8” trucks, with a gross combined weight up to 57,000 pounds.

The company is targeting 2021 for PowerLine’s initial U.S. market launch. The product would compete directly with Allison Transmission in many applications. 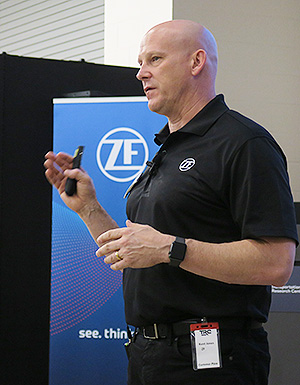 Kent Jones, vice president of sales for North America, acknowledged that ZF is “probably one of the largest, most unknown companies in our commercial vehicle trucking industry,” but the Friedrichshafen, Germany-based supplier has dramatically expanded its capabilities in recent years, in large part through acquisition.

“We are really in position to leverage these big megatrend technologies of ADAS and automated driving and e-mobility that are tremendously expensive to develop,” Jones said.

ZF completed a blockbuster purchase of TRW in 2015 and recently announced plans to acquire Wabco. The company expects its $7.1 billion purchase of Wabco to close in the beginning of 2020. Because the deal is not complete, ZF representatives would not share further details about that acquisition beyond previous public statements.

ZF rivals such as Bosch and Knorr-Bremse also have been positioning themselves to support the emergence of active steering and automated driving in commercial vehicles.