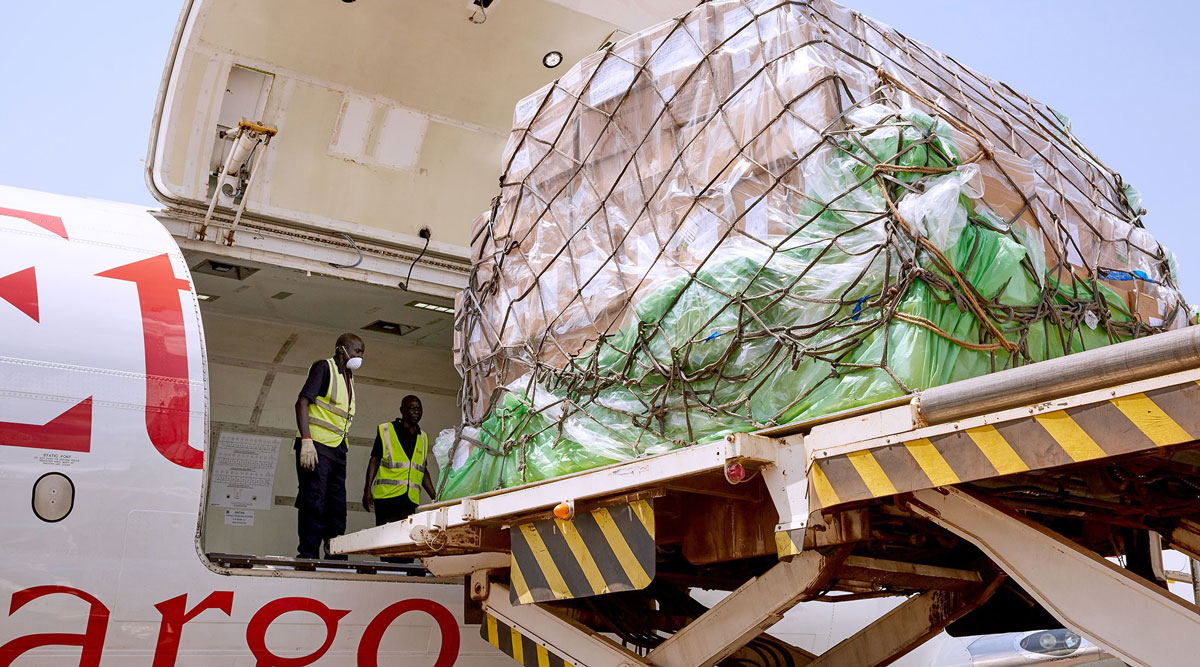 The industries that shepherd goods around the world on ships and planes acknowledge they aren’t ready to handle the challenges of shipping an eventual COVID-19 vaccine from drugmakers to billions of people.

Already stretched thin by the pandemic, freight companies face problems ranging from shrinking capacity on containerships and cargo aircraft to a lack of visibility on when a vaccine will arrive. Shippers have struggled for years to reduce cumbersome paperwork and upgrade old technology that, unless addressed soon, will slow the relay race to transport fragile vials of medicine in unprecedented quantities.

Making a vaccine quickly is hard enough but distributing one worldwide offers a host of other variables, and conflicting forces may work against the effort: The infrastructure powering the global economy is scaling down for a protracted downturn just as pharmaceutical companies need to scale up for the biggest and most consequential product launch in modern history.

“Let’s all be honest here, vaccine supply chains are exponentially more complex than PPE supply chain,” he said, referring to personal protective equipment like surgical masks and gloves. “You can’t ruin PPE by leaving it on the tarmac for a couple of days. You will destroy vaccines.” 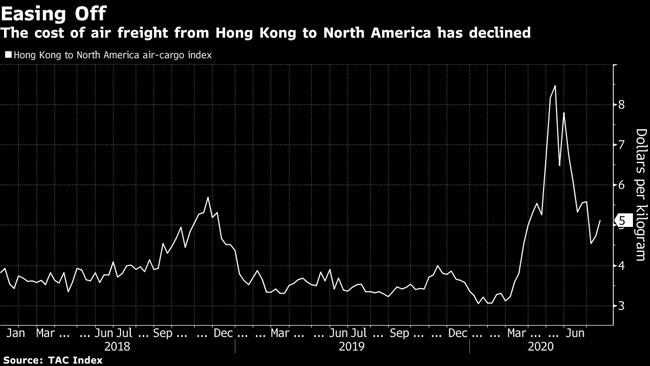 Julian Sutch, head of Emirates SkyCargo’s pharmaceutical division, estimated recently that a single Boeing Co. 777 freighter can carry 1 million individual doses of a vaccine. That means airlifting double-dose regimens to protect half the world’s population would require the space in about 8,000 cargo planes.

It’s doable, but not without a coordinated global strategy. For now, what’s helping to free up air freight capacity is retrofitting idled passenger planes so they can carry products ranging from medical gear to mangoes. Emirates is using 70 passenger 777s to move cargo, according to Sutch.

Another capacity issue involves refrigeration. Health officials have said a vaccine that eventually comes to market will likely need to be maintained at 2 to 8 degrees Celsius (35.6 to 46.4 degrees Fahrenheit) throughout the shipping process. Some newer technologies could require more advanced freezers that can keep them at a frigid minus 80 degrees Celsius. Any deviation can ruin the shots.

Among the big questions involving fairness and accessibility: Exactly how will medicine requiring such delicate and expensive transportation reach remote, impoverished areas where drones are now used to distribute pharmaceuticals?

Such details aren’t sorted out yet and shippers are aware of the need to get organized. But they’re waiting on signals from the drugmakers.

Shah said Flexport is in early discussions with a number of pharmaceutical companies involved in vaccine manufacturing that are still unsure about what they’re going to need. “To a T, they’re all extremely nervous about being able to bring these to market as quickly as people might expect,” he said.

There are more than 160 coronavirus vaccines in development, according to the World Health Organization, though only 25 are currently in human studies. The candidates furthest along are now launching late-stage trials, and have ambitions of securing an emergency use authorization from regulators before year end. That could allow for a limited availability of shots for health care workers and other vulnerable groups.

Ultimately, countries will need far broader access to COVID-19 shots to halt the virus that has devastated economies and so far taken more than 633,000 lives globally. But by all accounts that’s not likely to occur until well into 2021 at the earliest.

In the meantime, manufacturing deals are being clinched, and facilities are getting retrofitted to produce the still-experimental shots at the risk they fail in the clinic. Though the science underscoring the inoculations is still unproven, and mass production remains a daunting task, top pharmaceutical executives speculate that distribution will pose the greatest challenge of all.

“Often people are talking about the scientific conundrum of coming forward with a vaccine that works. In some ways, maybe even a harder problem is what you just put your finger on, which is distribution,” Merck & Co. CEO Kenneth Frazier said in an interview on Leadership Live With David Rubenstein on Bloomberg Television. “None of us are safe until all of us are safe, so it’s got to be given broadly to humanity. We need a vaccine that we can make and distribute around the world.”

Throughout nearly six months of the crisis, the closing and reopening of economies has thrown out of sync the usual seasonal flow of goods from China and other large manufacturing hubs, rendering forecasts useless for shipping plans. Making the future even harder to predict is the wide time range health experts are discussing for the arrival of an antidote to the coronavirus. 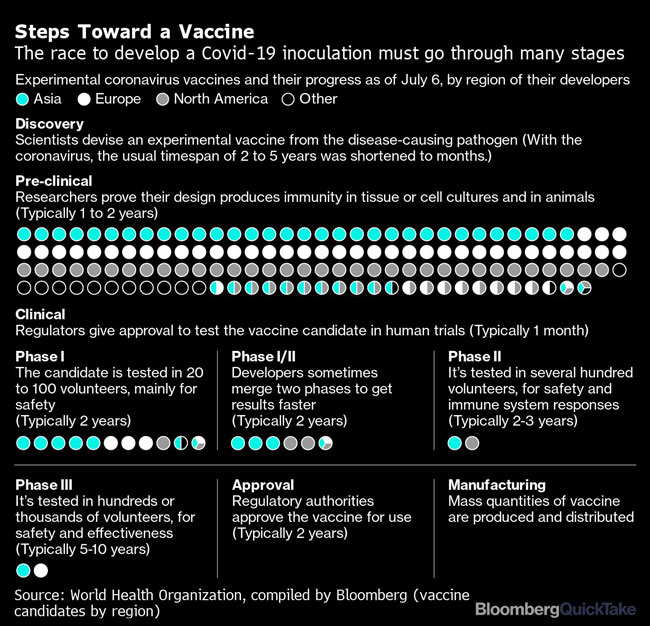 “I don’t think we’re ready because I don’t think we know what to expect,” said Emir Pineda, manager of aviation trade and logistics at Miami International Airport, which is among a limited number of airports around the world with carriers certified to handle pharmaceuticals. “If all of a sudden 20 to 30 charter flights land at Miami International Airport full of pharmaceuticals for distribution throughout the Americas, we’re going to have a challenge.”

Another complicating factor could be the behavior of some protectionist governments intent on hobbling international cooperation by exerting sovereignty over supply chains.

That attitude was on display this week at a hearing in Washington before a House Energy and Commerce subcommittee, where some lawmakers grilled executives of AstraZeneca, Johnson & Johnson, Merck, Moderna Inc. and Pfizer Inc. about whether their vaccines would be made in the U.S., and what countries they would acquire materials from.

“Systemic health threats are the least promising subjects for global cooperation,” said Simon Evenett, a professor at the University of St. Gallen in Switzerland who tracks trade barriers.

If private industry doesn’t rise to the delivery task, one option is outright government intervention. In the U.S., for instance, the Pentagon can call on commercial airlines contracted as part of the Civil Reserve Air Fleet, a program established in 1951 after the Berlin airlift that can be invoked in peacetime for national security reasons.

Amid the political noise is the steady hum of economies trying to recover, and the busy time of year for companies to stock up ahead of the end-of-year holidays typically is in August and September. Vaccine distribution aside, already elevated shipping prices may stay that way and remain more volatile than ever given the capacity shortages and the demand uncertainty.

“We are going to see spikes driven by commercial freight” over the next several months, said Michael Steen, executive vice president and chief commercial officer at the Purchase, N.Y.-based shipping company Atlas Air Worldwide. “The typical calendar peak will be strong — that’s what we’re expecting.”

The branded and generic drug industry has already stomached the high cost of transportation as the pandemic has thrown the airline industry into chaos. Even at the outset of February, industry trade groups and nonprofits struggled to help drug companies navigate the dearth of commercial and cargo flights.

“This is an issue of demand where the pricing is four, five, ten times of what they normally would be,” said Anne McDonald Pritchett, the senior vice president of policy and research for the Pharmaceutical Research and Manufacturers of America, during a virtual meeting on supply-chain hurdles in June.

Companies are getting creative, with some going through Canada and using trucks to haul products into the U.S. Others have chartered private planes to deliver finished therapeutics into the country. Those quick-fix, costly solutions aren’t likely to work when combined with the complex transport requirements of a coronavirus vaccine.

Hence the urgent need for a game plan.

“We’re not planning proactively for accommodating that vaccine distribution going forward because the various parties here are not connecting,” Steen said July 23 during the industry webinar, hosted by STAT Media Group, a trade industry publisher in Mumbai. “Shippers and manufacturers are not connecting.”

The good news, he said, is that drug manufacturers, companies along the distribution chain and governments still have time to understand how to “take this very scarce capacity and support the distribution of those vaccines in order to stimulate the economies and most importantly make people healthy again.”