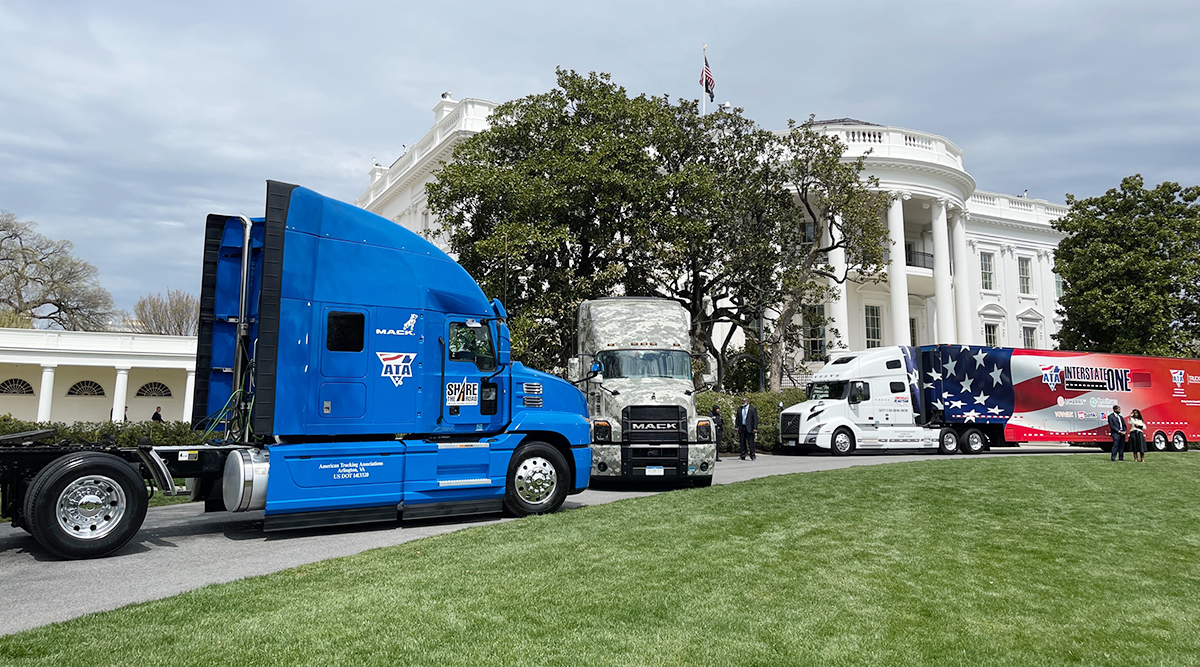 Three trucking industry image trucks are parked on the south side of the White House for the April 4, 2022 ceremony marking the completion of the 90-day apprenticeship program challenge. (American Trucking Associations)

Biden, during an April 4 address that marked the culmination of his administration’s workforce recruitment challenge for trucking jobs, touted programs that “allow aspiring drivers to earn while they learn, while making this essential job more attractive to potential drivers regardless of age, background and gender.”

The president said such efforts are designed to ease the industry’s driver shortage at a time when bottlenecks at the ports, partly the result of workforce shortages, are hindering supply chains. He also emphasized outreach programs for underrepresented groups in the industry, such as minorities and women. 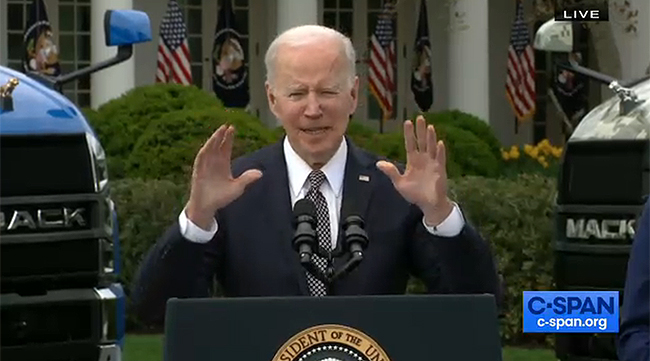 With trucking industry image trucks as the backdrop, Biden praises trucking for its efforts to combat the supply chain crunch during a time of driver shortage. (c-span.org)

“[The] Labor and Transportation departments are working closely with industry to tackle issues facing women in trucking, recruit and retrain more women drivers so we can draw more Americans to work with increased wages, reduced wait times, and improved safety, and so much more,” Biden said. “We’ve got to keep it going. We’re building a better economy around American manufacturing and American supply chains.”

“One trucker told me infrastructure is our workplace, and now we are enhancing that workplace thanks to unprecedented funding through the president’s infrastructure law,” the secretary said, referring to the $1 trillion Infrastructure Investment and Jobs Act that was enacted Nov. 15.

As part of the administration’s trucking workforce plan, the departments of Labor and Transportation partnered on a 90-day challenge. The challenge was designed to recruit employers interested in developing what are known as Registered Apprenticeships. These apprenticeships are meant to provide paid, on-the-job training. 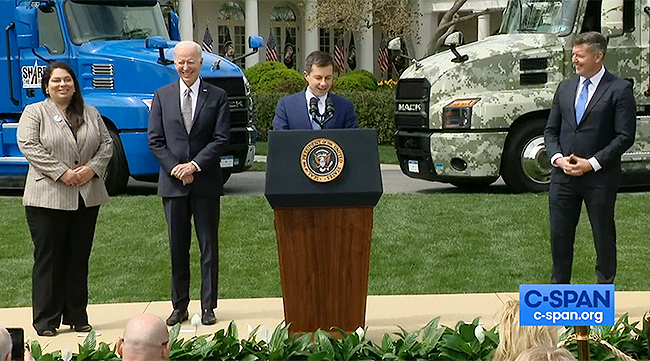 Secretary of Transportation Pete Buttigieg talks about the essential nature of trucking to the country. (c-span.org)

Freight executives, truck drivers and senior officials were in attendance for the president’s speech. Among them was American Trucking Associations Chairman Harold Sumerford, CEO of J&M Tank Lines, who acknowledged the administration’s efforts to tackle workforce issues.

“The job they have done in putting together this 90-day apprenticeship program, I just think it’s amazing how quickly it’s come about and the good it’s doing for our industry — bringing people in and being able to increase our workforce throughout the industry,” Sumerford told Transport Topics.

Sumerford added, “Trucking is the backbone of our economy, and we move over 73% of the nation’s goods on our trucks. You let trucks stop, our country stops.”

“Recognizing our dedication to training and safety, the departments of Labor and Transportation have worked quickly and efficiently in approving ATA as a Registered Apprenticeship sponsor,” ATA President Chris Spear said in a statement. “This long-sought designation provides our member companies valuable new tools and resources to help recruit and train the next generation of trucking talent.”

“We thank and commend President Biden, Secretary [Marty] Walsh, and Secretary Buttigieg for their commitment to the men and women of trucking who keep America moving forward,” Spear added.

“Our commitment to safety and training is unparalleled in the industry, and we’re proud that government leaders are investing even more in these programs for new drivers,” said Yellow CEO Darren Hawkins, who was at the White House.

Also speaking at the White House was Maria Rodriguez, a truck driver apprentice with NFI Industries, who touted the apprenticeship initiative.

“Once I was hired I received hands-on training and mentorship, all while being paid while I continued to learn,” Rodriguez told the audience. “The trucking industry is in high demand and there are jobs here that can support our family. As an essential part of the supply chain I feel like I’m a part of something bigger than myself, which is very rewarding.” 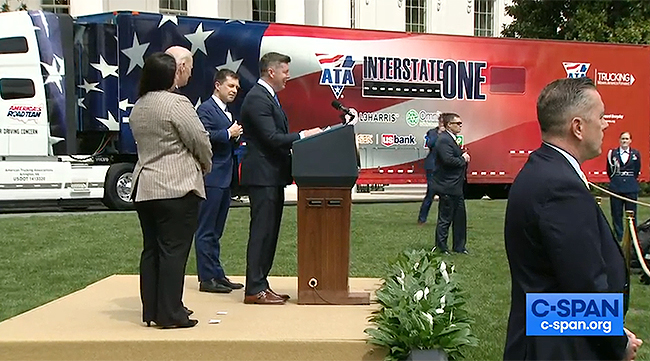 With ATA's Interstate One truck behind him, Iraq War veteran and former U.S. Rep. Patrick Murphy addresses the crowd on the South Lawn of the White House Apri 4. (c-span.org)

According to the White House, more than 100 employers directly associated with the freight industry launched Registered Apprenticeship programs during the 90-day window. Participants included Domino’s, Frito-Lay and UPS, as well as national partners such as Fastport and the International Brotherhood of Teamsters.

“This proven earn-and-learn model of workforce training will help employers and labor develop and retain a skilled workforce,” the White House stated, noting that apprentices are affiliated with motor carriers such as NFI Industries and Total Transportation.

In December, the Biden administration launched its trucking action plan to amplify recruitment and retention programs across the industry. ATA, which partnered with the Department of Labor on the apprenticeship program, recently determined the industry is short about 80,000 commercial drivers.