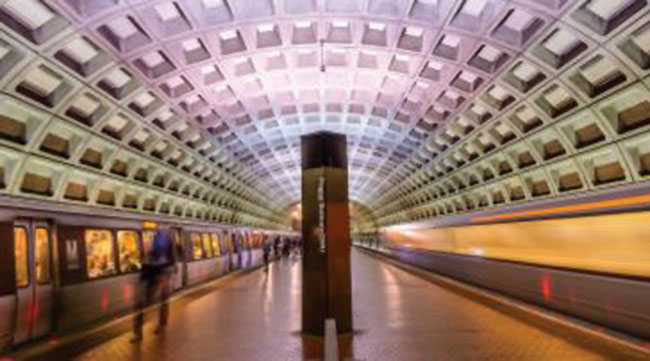 View from inside a Metro station. Transit is one of the eight categories included in the report card. (American Society of Civil Engineers' National Capital Section report)

The nation’s capital received a C on an infrastructure report card issued by the American Society of Civil Engineers on June 15.

Rail received a B for the highest grade. Levees and transit tied for lowest grade, each earning a D.

“The capital’s infrastructure systems are getting closer to where we want them to be” said Ranjit Sahai, ASCE’s Washington report card committee chair. “We have seen encouraging trends since the 2016 report was issued when the grade was a C-, but D.C. must continue to explore all solutions to improve the grades if we are to accommodate a growing population and economy in the future.”

According to ASCE, estimates indicate the population will grow from 672,200 in 2015 to 987,200 in 2045. The growth will put a strain on all sectors of infrastructure, especially the surface transportation network.

Bridges received a B- on the report card. According to the American Road and Transportation Builders Association, some 3.3% of Washington’s bridges are classified as structurally deficient.

Additionally, the report card calls for infrastructure investments based on long-term planning and prioritization. The evaluation was issued as negotiations continue on a federal infrastructure package in the nation’s capital.