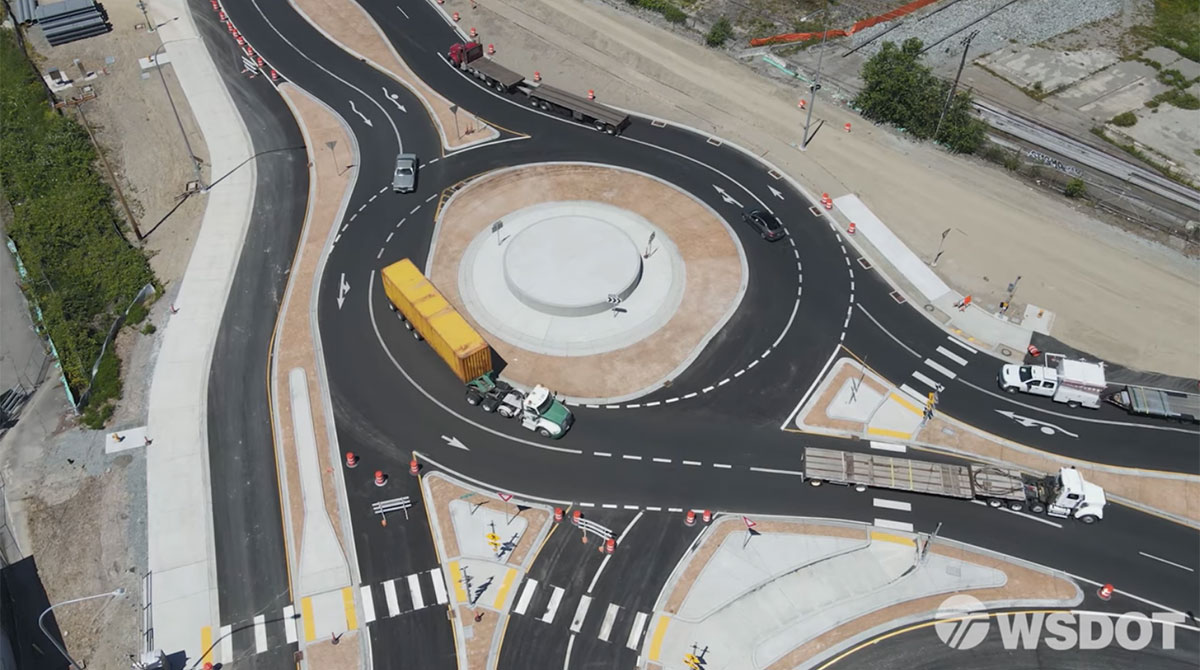 The Route 99 roundabout is designed to reduce delays for motorists and freight haulers traveling to and from the Port of Tacoma. (WSDOT via YouTube)

The Washington State Department of Transportation unveiled a new bridge that is meant to alleviate traffic in a busy freight corridor near the Port of Tacoma.

The Wapato Way East Bridge in Fife, which crosses Interstate 5, opened to traffic June 28. The four-lane bridge and the new state Route 99 roundabout replace the 70th Avenue East Bridge, which is now closed to vehicles. The new bridge doubled the capacity of the bridge it replaced.

“As a lifelong resident of Fife, I know what a huge milestone the Wapato Way Bridge project is,” said Fife City Council Member Pat Hulcey. “Fife has grown to a city of 10,000 and, with our proximity to the Port of Tacoma, has become a major freight route. The newly completed Wapato Way Bridge will bring much-needed improvements to traffic through Fife now and into the future.”

The roundabout is designed to reduce delays for motorists and freight haulers traveling to and from the Port of Tacoma.

Construction will continue through the summer to extend the nearby Interurban Trail and connect it to a pedestrian and bicycle path on the bridge. In the meantime, pedestrians and cyclists can cross I-5 using the old 70th Avenue East Bridge, which will ultimately be removed.

The completion of the bridge project marks an achievement in the department’s SR 167 Completion Project, which aims to extend SR 167 from Puyallup to the Port of Tacoma. The next stage of SR 167-related construction, which involves a new highway between I-5 and the port, is scheduled to start in 2022.

“The opening of the new bridge is an exciting and important next step in connecting our local businesses with the Port of Tacoma,” said Pierce County Executive Bruce Dammeier. “By making it faster and easier to get Pierce County goods to the places that want them, we are bolstering our local economy.”

Project at Port of Tacoma Aims to Relieve Congestion