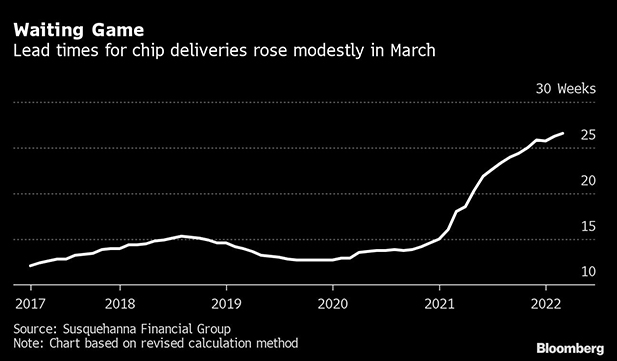 The wait times for semiconductor deliveries rose slightly in March, reaching a new high, after lockdowns in China and an earthquake in Japan further hampered supply.

Lead times — the lag between when a chip is ordered and delivered — increased by two days to 26.6 weeks last month, according to research by Susquehanna Financial Group.

While chip users are facing longer wait times again, the lead times are growing much slower than in 2021, when many industries were forced to slash their production because of a lack of the critical components.

Lead times increased for most chip types, including power management, microcontrollers, analog and memory, according to a report by Susquehanna analyst Chris Rolland. The war in Ukraine, COVID-19 lockdowns in parts of China and an earthquake in Japan “will have a short-term impact in the first quarter but may have lingering effects on the severely constrained supply chain through the year,” he said.

The global shortage of semiconductors began in the first half of 2020, driven by pandemic-fueled demand for consumer technology and vehicles. Semiconductor producers had pared back on output from their factories, and the sudden scarcity of chips disrupted production of everything from smartphones to pickup trucks. It also contributed to inflation by boosting supply costs.

Chip industry executives have cautioned that some customers will struggle to get enough supply until 2023. Much of the massive increase in building of new plants by companies such as Intel Corp. won’t bring production online until next year, at the earliest.

US Seeks Sharing of Chip Supply Information to Ease Crunch