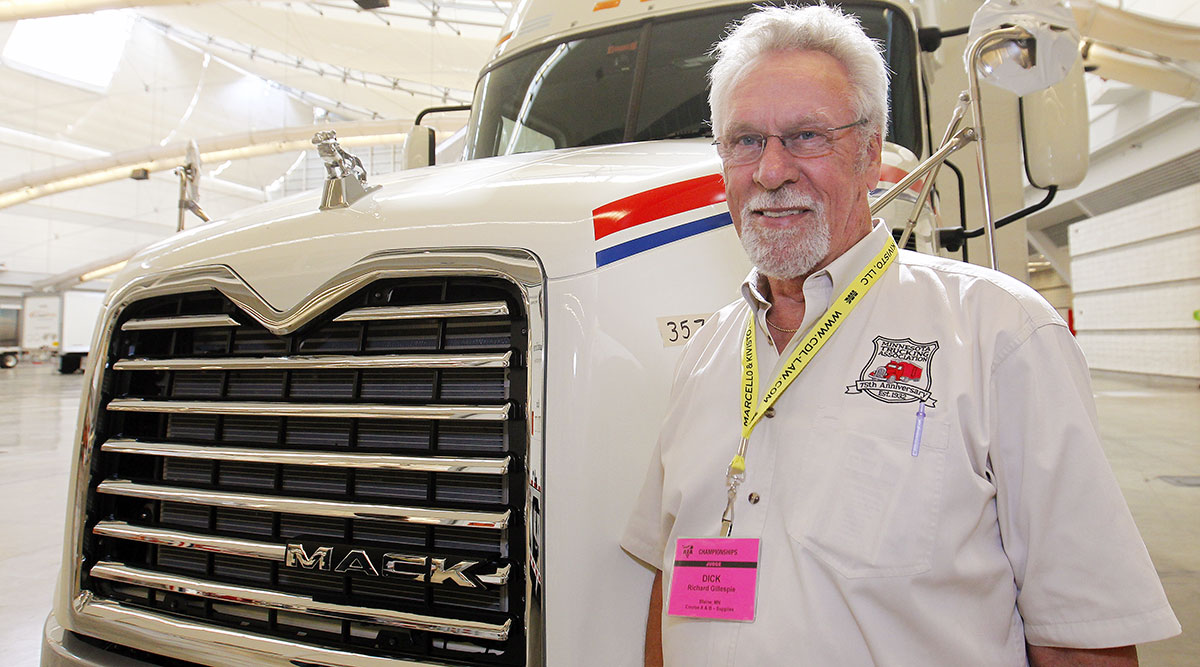 ORLANDO, Fla. — Since 1992, Richard Gillespie has ensured his fellow volunteers at the National Truck Driving Championships have plenty of pens, notepads and clipboards to be able to keep score when judging a challenge.

The task is simple yet highly relevant. Without pens to write with, judges would be unable to go about their tasks.

Since 2013, Dan Horvath has helped set up the course and judge a challenge at the championships. He is among the volunteers who monitor the drivers to record their performance.

With help from Gillespie, Horvath and dozens of other volunteers throughout the years, organizers of this annual “Super Bowl of Safety” have managed to produce a smooth event for more than 400 truckers who bring family and friends to watch the exhibition of skill and precision.

For Gillespie, lending a helping hand allows him to stay connected with the drivers and former colleagues as well as the industry that provided a forum for his talents. He retired in 1992 after driving for 35 years for Century Motor Freight Inc. and the Star-Tribune newspaper in Minneapolis. His winning record at the championships has been the stuff of legends. Gillespie is a two-time grand champion (1988 and 1991) and seven-time winner in the class he competed such as straight truck and flatbed divisions.

“I think the scores of this year are a little bit better than they have been in the past. It all depends upon the way the course is set up and this was a good course for the semi-finals and the finals,” he told Transport Topics on Aug. 12, the final day of competition.

He said he had noticed competitors struggling in the parallel parking challenge during the finals. It was a tight space that required drivers in every class except the twin trailers to squeeze in the vehicles.

According to Gillespie, the way to execute the challenge was to “be able to judge how far you are away from the curb when you’re coming in and don’t get too close.”

Easy for him to say. Nearly every competitor, including a former grand champion, were unlucky and failed to accrue points in that challenge.

Check out the 74 photos (so far) in our photo gallery from #NTDC2017! There might be someone you know! https://t.co/BXbHBP8CQ1 pic.twitter.com/AUj0z17C9y

Not every volunteer was a former competitor. Horvath, director of compliance and safety at TransForce, got hooked after he volunteered at nationals in Salt Lake City in 2013. The camaraderie and teamwork captured his attention. His primary role has been to assist with the challenges on the course.

“A lot of the regulars joked with me and said, ‘You’re going to come back every year.’ And here I am,” Horvath told TT. “I see a lot of familiar faces when I come back and I’ve made friends over the years.”

He also appreciates drivers who qualified for the championships by managing to remain accident-free for 12 months as well as winning their state championships.

“That’s a great thing to see every year and I’m always in awe over that, and it’s not just huge companies either, you see smaller companies that are participating,” Horvath added. “That’s really great to see.”