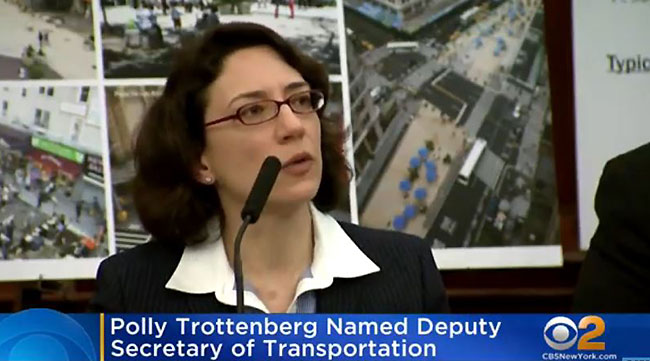 Polly Trottenberg, formerly commissioner of New York City's Department of Transportation, was confirmed by a Senate vote of 82-15. (CBS New York via YouTube)

The U.S. Senate on April 13 confirmed Polly Trottenberg to be deputy secretary at the U.S. Department of Transportation.

After an 82-15 vote, senators paved the way for Trottenberg to join the Biden administration as Secretary Pete Buttigieg’s deputy. The administration is seeking to gain approval for a $2.25 trillion infrastructure plan. Pillars of the plan include addressing concerns linked to climate change, modernizing ports and bridges, and upgrading rail and transit systems.

Prior to the vote, Trottenberg told senators she would focus on enhancing safety across the country’s mobility grid, and expanding access to freight and passenger corridors in urban and rural regions.

Welcome to the team https://t.co/O5AbVvWIKJ

“If confirmed, I will commit to making sure that eligible projects in rural areas receive their fair consideration for competitive discretionary grants,” she added.

Trottenberg most recently was New York City’s transportation commissioner. Prior to that, she served as a senior official at USDOT in the Obama administration.