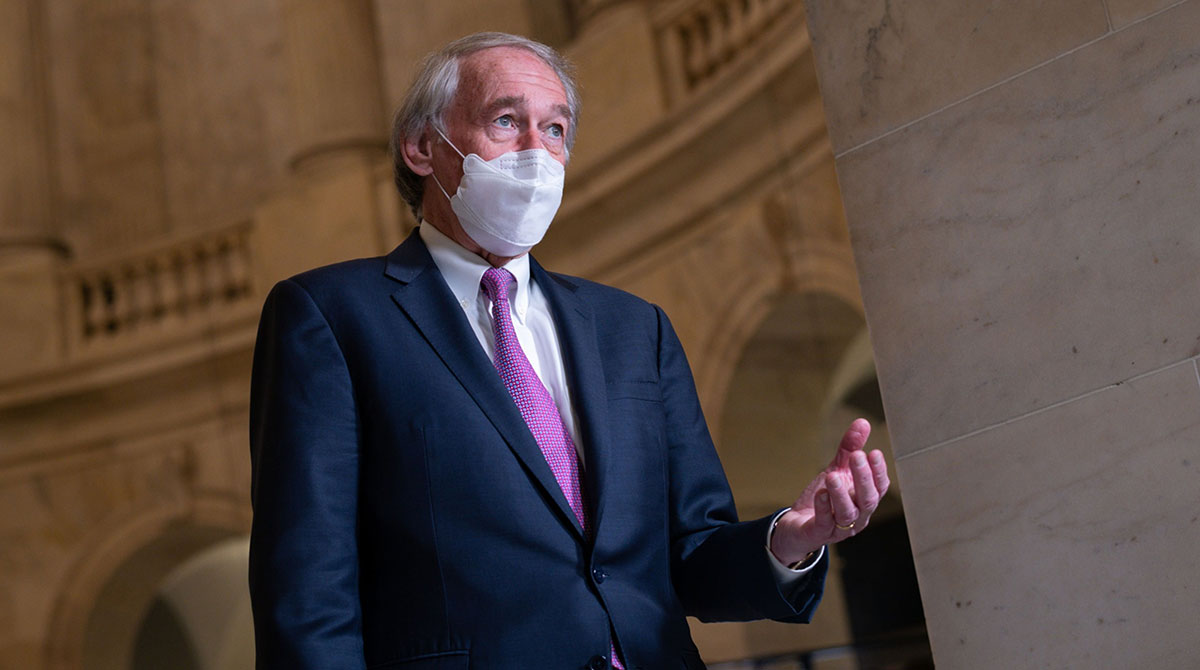 Sen. Ed Markey (D-Mass.), a member of the Commerce Committee, is a co-sponsor of the legislation. (Graeme Sloan/Bloomberg News)

A proposal for establishing a national program that promotes safety features for street designs recently was introduced by transportation policymakers.

The Complete Streets Act would require state agencies to use a portion of their federal funds for what are known as “complete streets” projects. Such projects, touted in urban regions, are meant to apply safety features along intersections and certain corridors to enhance users’ experience.

Enhancements often focus on sidewalks, bicycle lanes, crosswalks and bus stops. The objective is to safely accommodate pedestrians and motorists, while promoting access for every vehicle, from cars to trucks.

“Year after year of increasing fatalities demand that we make significant investments to ensure safety for all users of the road,” Sen. Ed Markey (D-Mass.), a Commerce Committee member, said Feb. 24. “At the same time, these investments present an enormous opportunity to lead the world into a new era of more accessible and climate-friendly transportation. By fostering ‘complete’ streets, we will foster complete communities — ones with less reliance on gas-guzzling cars, greater safety and more equity in everyone’s ability to access work, school and other critical services.”

“The United States is facing a national safety crisis. In recent years, we have seen a dramatic increase in the number of pedestrians killed by vehicles,” added Rep. Steve Cohen (D-Tenn.), a member of the transportation panel in the U.S. House. “We need streets that can accommodate all means of transportation, from foot traffic and strollers to bicycles, cars, light trucks and 18-wheelers.”

Specifically, the bill would require 5% of federal highway funds for “complete streets” projects. The legislation also would require the adoption of “complete streets” policy consisting of prioritization for such projects. Under the bill, state agencies and Metropolitan Planning Organizations would certify that policies meet minimum requirements. And agencies would be required to adopt design standards for projects that promote safety and the accommodation of users.

Year after year of increasing pedestrian and bicyclist deaths demand that we take bold action to ensure the safety of all road users.

That's why @RepCohen and I are reintroducing our Complete Streets Act. https://t.co/sWTkJnzxDh — Ed Markey (@SenMarkey) February 24, 2021

Markey and Cohen co-sponsor the bill in the Senate and the House. The legislation was referred to committees of jurisdiction. Other sponsors include Sens. Richard Blumenthal (D-Conn.) and Brian Schatz (D-Hawaii), as well as Reps. Adriano Espaillat (D-N.Y.) and Ruben Gallego (D-Ariz.).

A number of stakeholders have endorsed the congressional measure. “Every American, whether they bike, walk, drive, or take transit, should be able to use our roads safely,” Bill Nesper, executive director of the League of American Bicyclists, said in a statement accompanying Markey’s announcement. “The League of American Bicyclists applauds Sen. Markey and Rep. Cohen for reintroducing the Complete Streets Act and we are proud to support the bill because we believe that when more people choose to ride bikes, communities are stronger and our nation is healthier.”

“The Complete Streets Act is a huge step toward reversing these perverse incentives by reallocating existing funding and empowering cities and towns to design streets that keep everybody safe. We are pleased to support this important legislation again this year,” said Scott Goldstein, policy director of Transportation for America, in a statement accompanying the bill’s announcement.

According to the U.S. Department of Transportation, “complete streets” are designed and operated around the country to ensure the safety of every user. “The concept of ‘complete streets’ encompasses many approaches to planning, designing and operating roadways and rights of way with all users in mind to make the transportation network safer and more efficient. ‘Complete Street’ policies are set at the state, regional and local levels and are frequently supported by roadway design guidelines,” per the department.