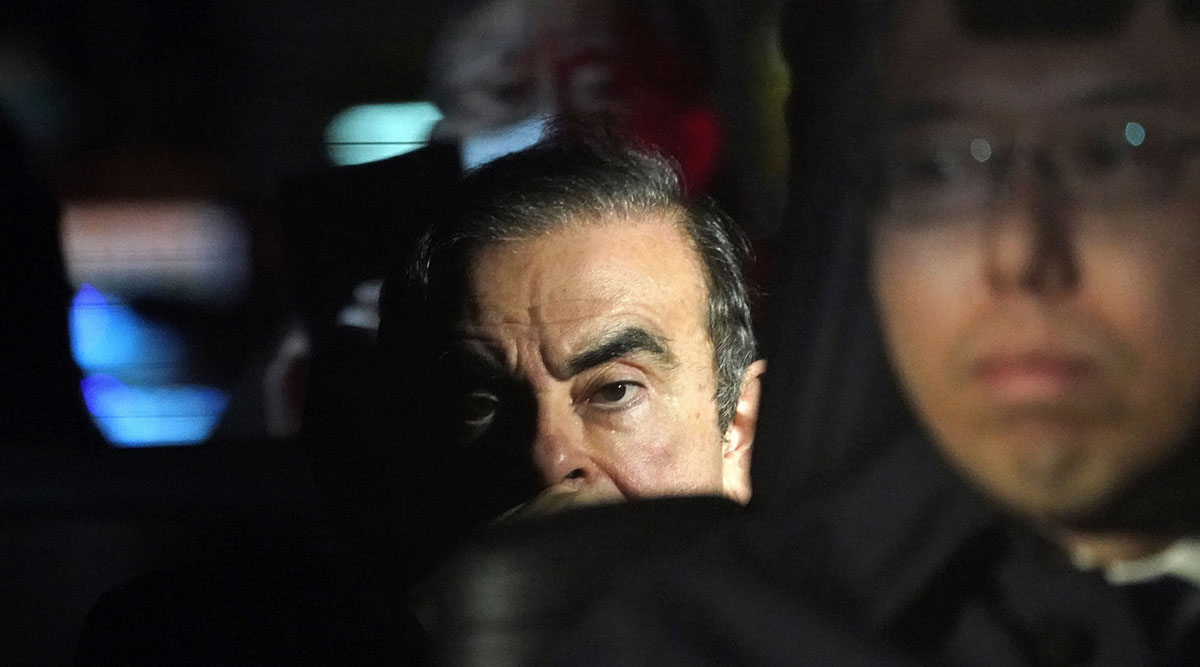 Charles Ghosn sits in a vehicle as he leaves his lawyer's office in Tokyo, Japan, in March 2019. (Toru Hanai/Bloomberg News)

The American father-son duo charged with helping former Nissan Motor Co. Chairman Carlos Ghosn flee trial in Japan a year and a half ago pleaded guilty in a Tokyo court June 14.

Appearing for the first time since they were extradited to Japan from the U.S. earlier this year, Michael Taylor, 60, and Peter Taylor, 28, listened as the prosecutor read out the charges. Asked by the judge whether there was any problem with the charges, Michael replied “No, Your Honor” while Peter said “No, ma’am.”

The duo, dressed similarly in dark jacket and pants, white shirt with no tie and plastic slippers, arrived in handcuffs. Michael appeared frail, his hair thinning and voice raspy. His son appeared stronger and spoke with confidence. Both have spent time in solitary confinement.

The Taylors were brought to Japan in March to face charges related to their involvement in Ghosn’s escape in late 2019 from Japan, where he was facing charges of financial misconduct. After smuggling himself in a case for audio equipment and boarding a private jet, the former auto executive made his way to Beirut, where he currently resides.

The pair face a maximum of three years in prison on charges of harboring or enabling the escape of a criminal. They had already served time in the U.S. before being extradited, and it’s not clear whether that time will be factored into their sentencing in Japan. The State Department said it would inform the Japanese government of the amount of time the Taylors had served so that it could be factored into any sentence imposed, according to a letter seen by Bloomberg News.

A former Green Beret, Michael has never denied his involvement in Ghosn’s escape, even describing how he executed the operation in an interview with Vanity Fair before he was arrested. A longtime security consultant, Michael said he had been planning the operation for months, though he had maintained that his son, Peter, had no role in the escape.

Upon entering the courtroom at the Tokyo District Court on Monday afternoon around 2 p.m. local time, the Taylors, represented by five lawyers, were handed earphones to listen to the translation, asked their particulars by one of the judges and then read details of their indictment by one of two prosecutors.

The prosecutor outlined how Ghosn was facing a trial for falsifying financial reports and breach of trust, and “knowing that he was supposed to face this trial and he should not hide or go abroad, knowing all that, you helped him avoid the trial by helping him escape via Turkey to Lebanon?”

He then read from a statement that said the Taylors hid Ghosn in some luggage, then took him to a hotel in Osaka and then onto Kansai airport, still hidden. The box with Ghosn was then moved to the international airport past the premium gate, past security and placed on a jet that left Japanese territory.

Both Michael and Peter, who appeared calm throughout and briefly looked at reporters in the audience box, said there was no problem with those allegations.

The court was also provided with a description of some of the mechanics surrounding Ghosn’s dramatic escape, including how in order to provide Ghosn with a private jet, around $862,000 was transferred to the bank account of a company that Peter was involved with, and how Ghosn and the Taylors used a particular mobile app to communicate and exchange messages.

At one stage, it was relayed to the court that Peter had said helping Ghosn escape was the worst thing he did in his life and he has deep regrets.

The Taylors’ case in Tokyo is the latest addition to multiple legal proceedings around the world left in Ghosn’s wake. Former Nissan director Greg Kelly is currently standing trial in Tokyo for allegedly helping to understate Ghosn’s compensation and Nissan is suing Ghosn for 10 billion yen ($95 million) in damages in a separate suit that’s proceeding slowly in Yokohama. French investigators have been questioning Ghosn in Beirut on accusations he siphoned Renault SA funds, and last month the former executive was ordered to pay almost 5 million euros ($6 million) to a local unit of Nissan in a case in the Netherlands.

The Taylors are next back in court on June 29, when the defense team will present statements from the Taylors and the pair will be cross-examined.