US-Canada Trade Talks to Resume Sept. 5 After No Deal Reached 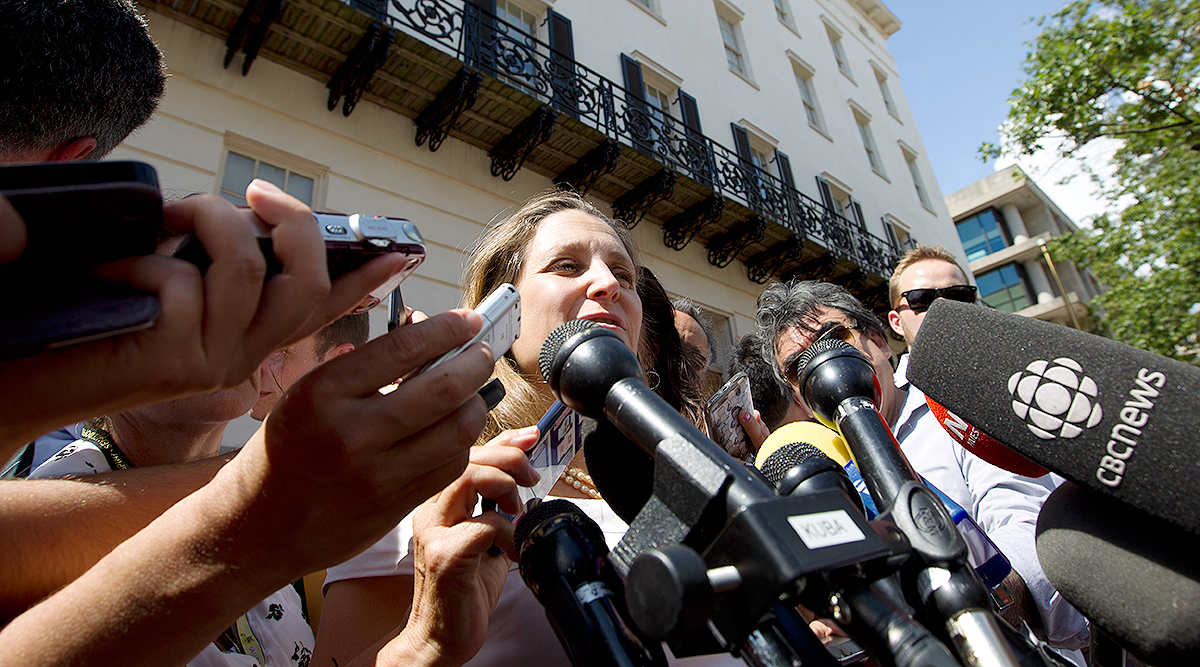 Canada Foreign Affairs Minister Chrystia Freeland speaks with the media as she arrives for trade talks at the Office of the United States Trade Representative Aug. 31, 2018. (Jose Luis Magana/Associated Press)

President Donald Trump said he plans to pursue a trade deal with Mexico and possibly Canada even as talks with America’s northern neighbor stalled just hours before a deadline, leaving the future of a revised NAFTA in doubt.

The White House notified Congress on Aug. 31 that it planned to sign a deal with Mexico in 90 days and would include Canada “if it is willing.” U.S. negotiations with Canada will resume Sept. 5 after four days of intense negotiations in Washington ended without a deal. The White House wanted Ottawa to sign onto the preliminary agreement it struck with Mexico on Aug. 27 to modernize the North American Free Trade Agreement.

“Over the next few weeks, Congress and cleared advisers from civil society and the private sector will be able to examine the agreement. They will find it has huge benefits for our workers, farmers, ranchers and businesses,” U.S. Trade Representative Robert Lighthizer said in a statement.

Canadian Foreign Affairs Minister Chrystia Freeland has been in Washington since Aug. 28 in an accelerated push to reach an agreement. The Trump administration had given Canada until Aug. 31 to join on to its deal with Mexico or risk being left out.

Canada has been clear about its “red lines” around NAFTA, Trudeau said at an event in Oshawa, Ontario. “We are looking forward to signing the right deal for Canada. But we have also been very clear, we will only sign a deal if it is a good deal for Canada.”

Trump has been pushing to get a new NAFTA approved under a process known as fast-track authority that allows him to seek a simple yes-or-no vote in Congress on trade deals, as long as his administration clears certain procedural hurdles.

Under fast-track rules, Trump must notify Congress 90 days before signing the deal. The White House set a deadline for Aug. 31 because it wanted to notify Congress in time for Mexican President Enrique Pena Nieto to sign the deal before his successor takes power Dec. 1.