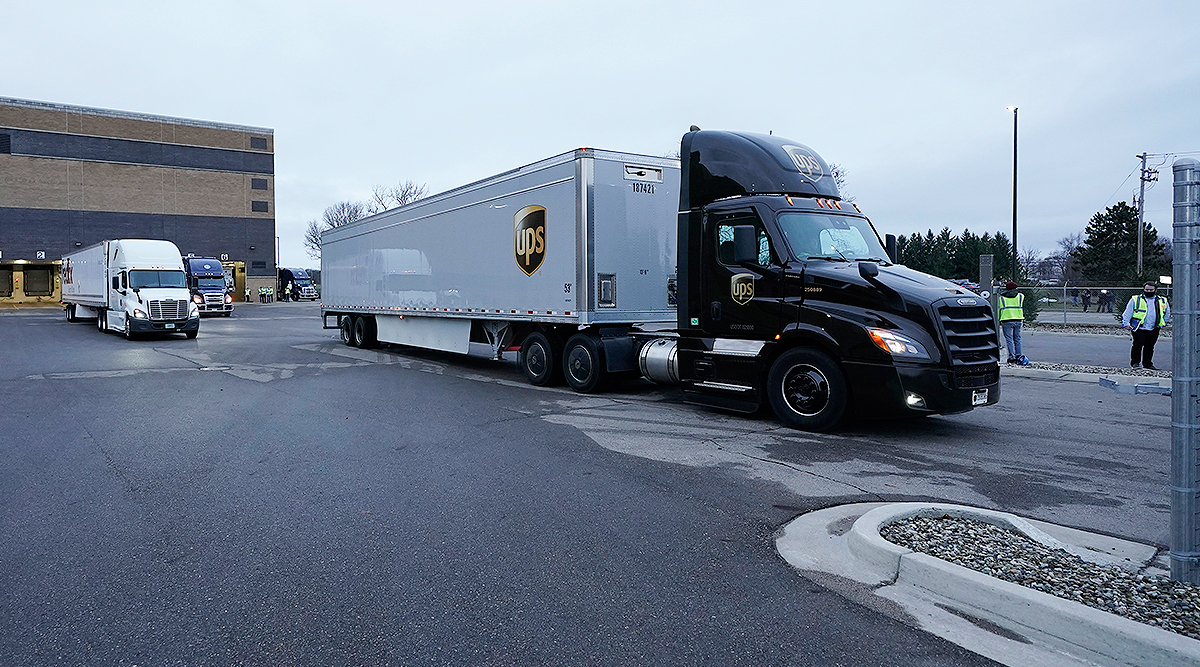 KALAMAZOO, Mich. — The first shipments of a COVID-19 vaccine for widespread use in the United States headed Dec. 13 from Michigan to distribution centers across the country, with the first shots expected to be given in the coming week to health care workers and at nursing homes.

Hauled by trucks from UPS Inc., FedEx Corp. and Boyle Transportation, the shipments of the Pfizer vaccine will set in motion the biggest vaccination effort in American history at a critical juncture of the pandemic that has killed 1.6 million and sickened 71 million worldwide.

Initially, about 3 million doses were expected to be sent out, and the priority is health care workers and nursing home residents as infections, hospitalizations and deaths soar in the U.S. With numbers likely to get worse over the holidays, the vaccine is offering a bright spot in the fight against the pandemic that’s killed nearly 300,000 Americans. 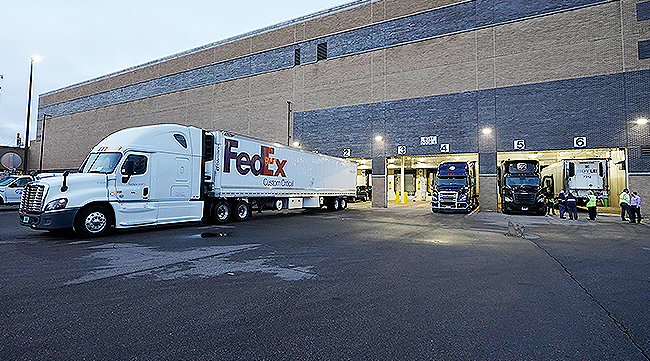 Federal officials say the first shipments of Pfizer’s vaccine will be staggered, arriving in 145 distribution centers Dec. 14, with an additional 425 sites getting shipments Dec. 15, and the remaining 66 on Dec. 16. The vaccine, co-developed by German partner BioNTech, is being doled out based on each state’s adult population.

Pennsylvania health care giant UPMC has chosen staff who are critical to operating its facilities as among those getting the first round of vaccinations, said Dr. Graham Snyder, who led the center’s vaccine task force.

“It’s very exciting. I will be thrilled, that moment when we administer our first dose,” Snyder said Dec. 12. “That will clearly be a watershed moment for us.”

Snyder said the UPMC system estimates that half its employees are willing to get the vaccine as soon as it’s offered to them. 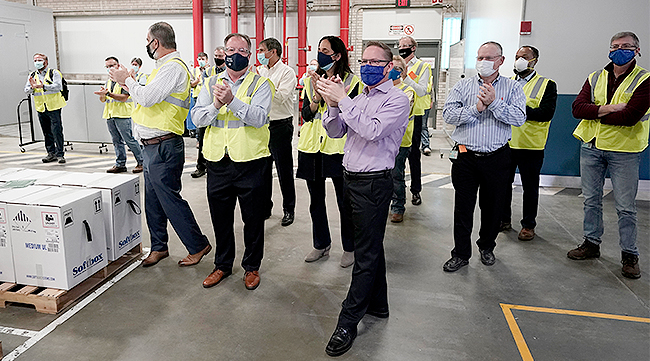 The vaccine is heading to hospitals and other sites that can store it at extremely low temperatures — about 94 degrees below zero. Pfizer is using containers with dry ice and GPS-enabled sensors to ensure each shipment stays colder than the weather in Antarctica.

Doses should be delivered to all vaccination sites identified by states, such as local pharmacies, within three weeks, federal officials said.

Employees approved for the first round are getting texts and emails directing them to schedule their initial injection, she said.

COVID-19 vaccines have safely departed out of Grand Rapids and are continuing their journey to their final destinations. pic.twitter.com/a2gNIh0V5d — FedEx (@FedEx) December 13, 2020

“I would say there’s enthusiasm,” Kemmerly said Dec. 12. “There’s that thought that maybe they don’t have to be so afraid to come to work if they can be vaccinated and be immune.”

The rollout will ensure there is enough vaccine to give people the two doses needed for full protection against COVID-19. That means the government is holding back 3 million doses to give those vaccinated in the first round a second shot a few weeks later.

The Food and Drug Administration authorized emergency use of the vaccine Dec. 11, saying it is highly protective and presents no major safety issues. While U.S. regulators worked for months to emphasize the rigor and independence of their review, they faced political pressure until the final stages.

Concerns that a shot was rushed out could undermine vaccination efforts in a country where some are skeptical about vaccines — some because of overall opposition to vaccines and others because of the quick timeframe in which the virus vaccines were developed. Even some health care workers have said in surveys that they would forgo at least the first round of shots to see how things go.

The first flight of COVID-19 vaccines has landed at our Worldport facility, where they will be sorted and distributed as early as tomorrow. We’re proud to support our healthcare partners with smart, efficient logistics to #deliverwhatmatters most. pic.twitter.com/wBHsAPepp8 — UPS (@UPS) December 13, 2020

The head of the FDA has repeatedly insisted that the agency’s decision was based on science, not politics, despite a White House threat to fire him if the vaccine wasn’t approved before Dec. 12.

Speaking Dec. 13 to Fox News, Dr. Moncef Slaoui, chief science adviser to Operation Warp Speed, a U.S. effort to get vaccines developed quickly, also said he is “very concerned” about the skepticism about the vaccine in some circles.

“Unfortunately … there’s been a confusion between how thorough and scientific and factual the work that has been done is, and the perception that people are thinking that we cut corners or anything like that,” Slaoui said. “I can guarantee you that no such things have happened, that we follow the science.”

He called the development of vaccines from several pharmaceutical companies, including Moderna and AstraZeneca, “a remarkable achievement of science, academia, the industry ecosystem and the U.S. government, working together.”

Another vaccine by Moderna will be reviewed by an expert panel next week and soon afterward could be allowed for public use.

UPS Inc. ranks No. 1 and FedEx Corp. No. 2 on the Transport Topics list of the Top 100 largest for-hire companies in North America.