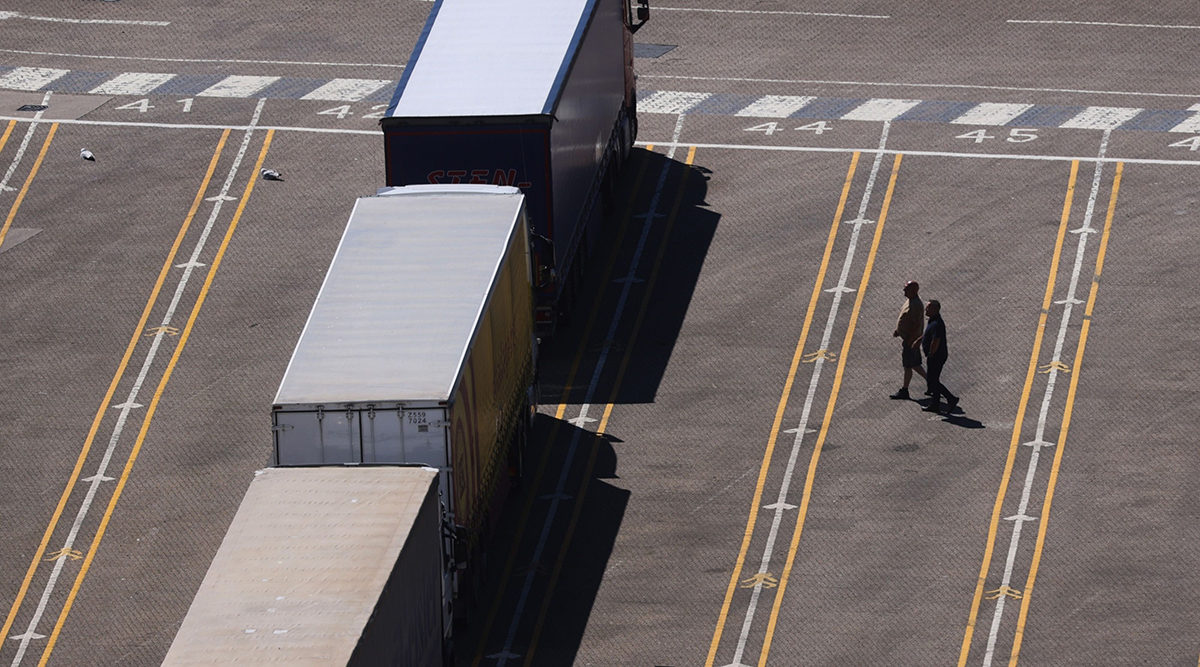 When Helen Wang’s Abakus Foods is ready to ship its seaweed crisps, she calls up a hauler.

Normally, a truck comes the same day to collect them from her base in northeast London. But, in recent weeks, there has been a problem: A national shortage of lorry drivers means deliveries are facing dayslong delays, and stock is piling up.

“It’s a struggle every time,” said Wang, who has had to pay 3,000 pounds ($4,100) a month to rent extra storage space for goods that haven’t been collected. “It’s meant a lot of headache and tension.”

Her experience is one shared by many companies across Britain: A shortage of drivers, exacerbated by Brexit and COVID, is pushing up delivery costs and leading to empty shelves in stores. 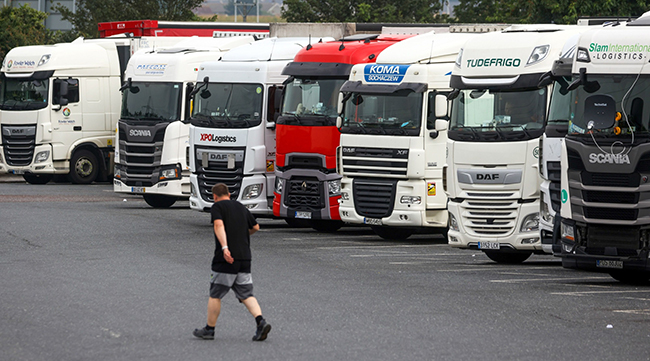 A driver passes a row of heavy goods vehicles at a service station near Chafford Hundred in the U.K. on July 13. (Chris Ratcliffe/Bloomberg News)

It’s a sign of a much bigger structural shift in the U.K. economy after Boris Johnson took the country out of the European Union. Industries from hospitality to agriculture and health care are having to adapt to a sudden reduction in the availability of cheap labor from the bloc. The symptoms are likely to be exacerbated following the government’s lifting of the bulk of Britain’s coronavirus restrictions on July 19.

The shortage is already having ripple effects throughout the U.K. economy. Fresh fruit, vegetables and milk are going to waste due to canceled or delayed deliveries, according to Tom Bradshaw, vice president of the National Farmers’ Union. And the country’s biggest supermarkets are beginning to see gaps in their offerings due to goods not arriving at their stores.

“While we might not always have the exact product a customer is looking for, we’re delivering more products to stores every day and we are confident customers will find a suitable alternative,” supermarket chain Sainsbury said in a statement. In June, grocer Tesco CEO Ken Murphy said the company is working “exceptionally hard” to manage the driver shortage.

The lack of truckers — the result of an aging workforce, the high cost of training new drivers and the industry’s low margins — has long been a problem in Britain. But the twin effects of Brexit and COVID have brought the industry to a crisis. In 2020, there were 76,000 fewer drivers than needed, a figure that has since risen to 90,000, according to Logistics U.K., a lobby group. 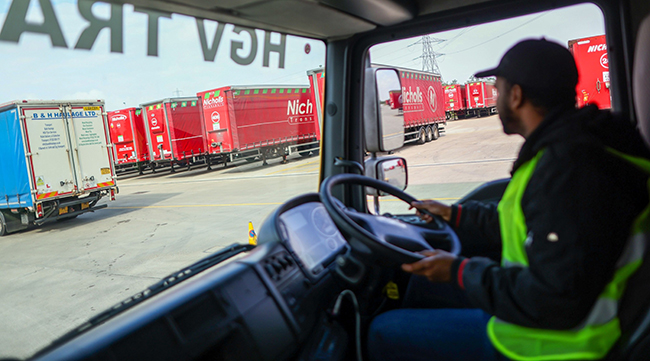 A trainee driver of a heavy goods vehicle performs a maneuver at Nicholls Transport in Sittingbourne, U.K. (Chris Ratcliffe/Bloomberg News)

“It’s close to a perfect storm,” said Ian Baxter, chairman of Baxter Freight, a Nottingham-based transport firm that moves goods for FTSE-100 companies. According to him, the pandemic has disrupted training courses for new drivers, while the additional customs checks required by Brexit have delayed truckers making deliveries.

“The supply of vehicles is extremely tight,” Baxter said. Prices for same-day deliveries have gone up by as much as 30%, he added.

For Johnson’s government, addressing the driver shortage is one of its first big practical tests following Brexit — but the solutions it has so far offered have only put it at odds with the industry.

The government has rejected calls from haulers to give overseas drivers temporary visas to help plug the gap. For Johnson, one of the a key arguments in favor of leaving the EU was controlling migration.

“We have no plans to introduce a short-term visa for HGV drivers,” the Department for Transport said in a statement. “Employers should invest in our domestic workforce instead of relying on labor from abroad.”

The DfT has said it will provide additional testing capacity so more people can become qualified and will provide more funding to train drivers. On July 20, the department said it also will introduce a package of measures, including more official parking spaces, to improve working conditions in the industry.

The government is also relaxing rules limiting the hours truckers can drive each day. They previously had to stop after nine hours, but this has been extended to 10 hours. Yet the industry argues this is a poor, low-impact fix that threatens driver safety.

Johnson’s administration has left it up to the industry to take further measures. Speaking in the House of Lords on July 7, transport minister Charlotte Vere called on truckers to “step up just a little more.”

Increasing wages in the industry could help. Before the pandemic, a driver could expect to earn an average of about 32,000 pounds ($43,500) a year. Truckers hired through agencies can now expect to earn more than 40,000 pounds ($54,500), a figure that is set to rise further as the shortage worsens, according to Kieran Smith, CEO of Driver Require, a specialist driver recruitment agency.

We have a real problem in this country. Delivery is getting more and more a real nightmare.

The best way to fix the immediate shortage, Smith said, would be to encourage already-licensed lorry drivers in the U.K. who have found work in other fields to get behind the wheel again. There are about 300,000 qualified drivers who fit this profile, and many could be tempted back with better pay and working conditions, he said.

For Hubert Zanier, managing director of Kipferl, a London-based cafe that delivers Austrian delicacies such as sachertorte across the U.K., a solution to the shortage can’t come soon enough. He complains he has been plagued by drivers not showing up to collect consignments or failing to deliver them.

“We have a real problem in this country,” Zanier said. “Delivery is getting more and more a real nightmare.”