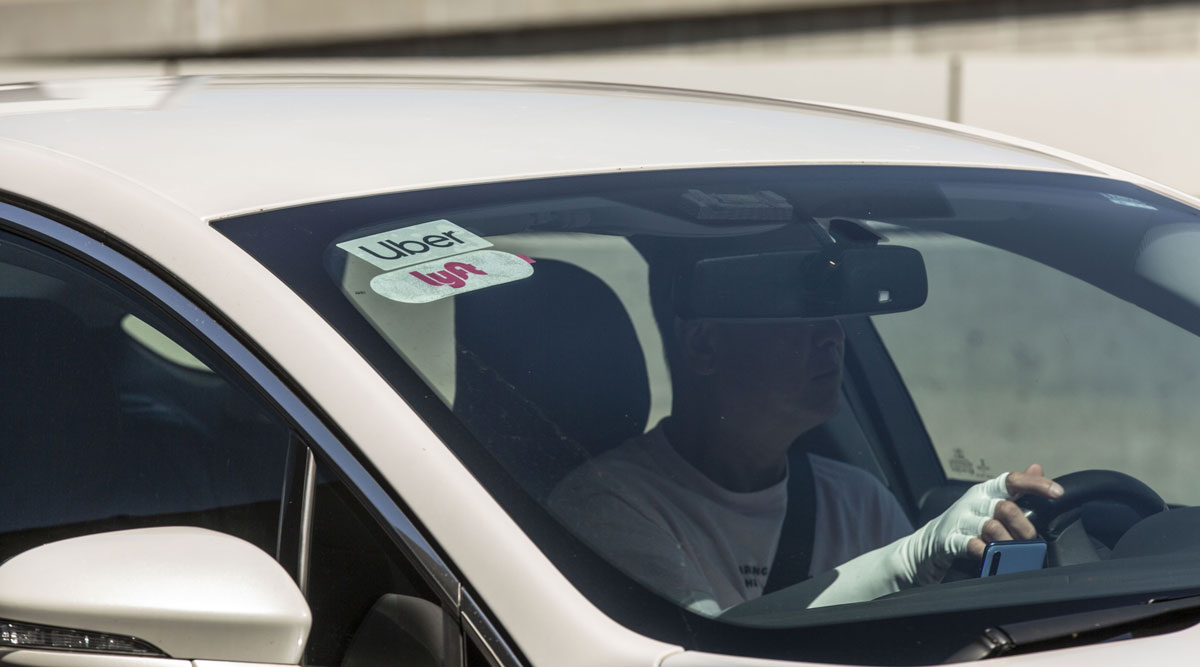 Lyft and Uber logos are displayed on the windshield of a vehicle at LAX in September 2019. (Allison Zaucha/Bloomberg News)

Uber Technologies Inc. and Lyft Inc. face the gravest threat yet to their business models after an appeals court ruled they must treat their drivers in California as employees instead of independent contractors.

The bombshell decision Oct. 22 comes less than two weeks before an election in which the ride-booking companies are counting on voters to approve a ballot measure that would partially exempt them from the labor law at issue in the legal fight. If the vote doesn’t go their way, Uber and Lyft are threatening to shut down in their home state.

The ruling upheld a lower court’s order that the companies comply with Assembly Bill 5 — which took effect in January — and provide drivers with the costly benefits that employee status confers.

“Although the business context may be relatively new, we conclude that the injunction was properly issued in accordance with enduring principles of equity,” the three-judge appeals panel said in its ruling. “It is broad in scope, no doubt, but so too is the scale of the alleged violations.”

Uber and Lyft are helping bankroll Proposition 22 in the most expensive ballot-measure campaign in California history. Polls have indicated the election outcome is too close to call.

“Today’s ruling means that if the voters don’t say yes on Proposition 22, rideshare drivers will be prevented from continuing to work as independent contractors, putting hundreds of thousands of Californians out of work and likely shutting down ridesharing throughout much of the state,” Uber said in a statement.

Lyft said it was considering an appeal to the California Supreme Court.

Proposition 22, which is set for a vote Nov. 3, exempts the companies from paying for full benefits that employees currently get under California law, such as unemployment insurance and complete workers compensation, while requiring a pay guarantee for drivers’ time on trips, health care contributions and medical and disability coverage, among others.

The appeals court rejected the argument put forth by Uber and Lyft that the Aug. 10 injunction issued against them was “radical” or “unprecedented.”

“These adjectives perhaps say more about the reach of modern technology and the scale of today’s technology-driven commerce than they do about the order itself,” the panel said.

The ruling was hailed by opponents of Proposition 22.

“No matter how many times Uber and Lyft break the law, Attorney General Xavier Becerra and city attorneys have had rideshare drivers’ backs as we demanded what the law clearly guarantees us: sick pay, unemployment insurance and workers’ compensation,” said Uber and Lyft driver Jerome Gage.

“First the state Legislature, then the governor, and now the courts have all agreed that drivers are employees under state law, and Prop. 22 is nothing more than an attempt by multibillion-dollar gig companies to undo that recognition,” the group said in an emailed statement.