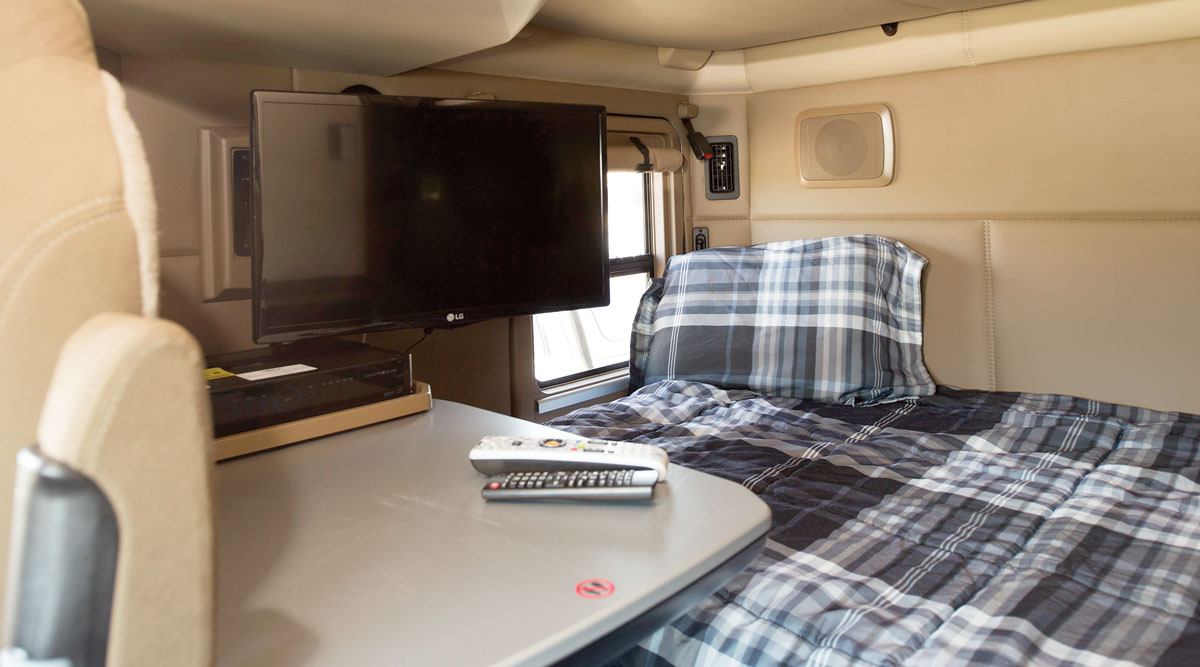 Comforts of home such as in-cab satellite television can improve driver satisfaction. EpicVue

Longhaul trucking can be a difficult and isolating job, but some fleets have turned to electronic in-cab entertainment to keep drivers connected and boost their job satisfaction. And when drivers are satisfied, better retention and recruiting numbers often follow.

The onus for researching, purchasing and arranging the logistics for various modes of in-cab enter­tainment — such as satellite television — previously fell on drivers, if fleets would even permit the truck modifications necessary for installing the hardware. But now, more fleets are providing and publicizing these comforts of home as a recruiting tool. 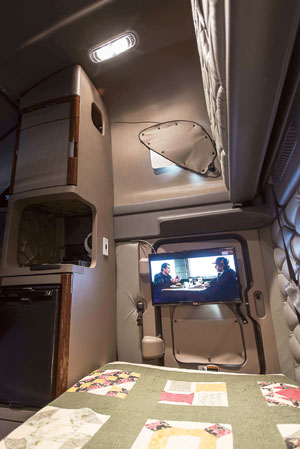 Some fleets are adding in-cab satellite television service to their trucks as a way to enhance driver recruiting and retention. EpicVue

“I posted about it … and I got a lot of talking going on. There was stirring and conversations around the company and on the internet,” Williams said.

Although it’s difficult to prove that satellite TV nearly doubled Paul Transportation’s application numbers, Williams said that “adding EpicVue is the only thing we did differently, so I’d say [it’s] a huge part of that increase.”

A bump in applications also occurred at Wisconsin­-based Millis Transfer after it began offering in-cab satellite TV two years ago. “Right away, when we started it, our numbers increased,” said Ethan Zeimet, the fleet’s director of finance.

“We found that the drivers who have had the opportunity to enjoy this benefit are more likely to stay with the fleet that’s offering it to them,” EpicVue President Lance Platt said. “And drivers who want it are being attracted to fleets that are making it available.”

That trend was noticed by Alabama-based R.E. Garrison Trucking, which this year purchased the satellite TV service for its entire fleet.

The company had lost a couple of driving teams to competitors, with one team noting that it was willing to accept less pay at a competitor with TVs in the trucks. With that, R.E. Garrison decided “we had to offer that,” said Shawn Nelson, vice president of operations.

“We did decide to start trying to get it in our trucks at that time, and it worked out. That team came back and they have decided to stay.”

The retention effects have rippled past that one team as well. 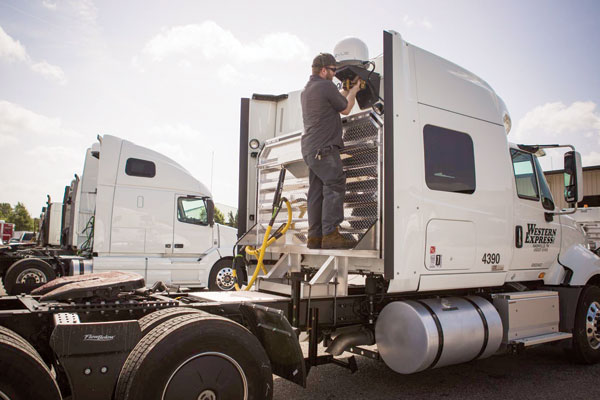 “I’ve done several things [to aid retention] over the years, and I’d like to think all of them helped a little bit, but this is one thing that kind of made a buzz,” Nelson said. “I know specifically the TVs and the EpicVue units have helped because the drivers come in and tell me.”

“It tells the drivers that you care about them and they deserve all the quality of being at home in the truck,” said Williams of Paul Transportation.

Part of that sentiment involves removing the isolation drivers might feel from not being plugged in to pop culture.

“It allows them to feel more connected to family and friends as they’re talking about the latest show or episode or sports game,” EpicVue’s Platt said.

“I love it. It’s as simple as that,” said Michael Morrow, a driver for Dart Transit Co. “It makes the time on the road go by a lot quicker and … I had been using my iPad, but my eyes get tired using such a small screen, so it’s been nice to have a full-sized television.”

He confirms that the company’s investment in satellite TV service pleases drivers and factors into retention.

“I was extremely comfortable with Dart already, but with that [service] being added on, it makes me even more comfortable. You never want to leave somewhere that you feel comfortable,” Morrow said.

Dart, which is based in Eagan, Minn., ranks No. 64 on the Transport Topics Top 100 list of the largest for-hire carriers in North America.

Drivers at other companies also report that they’ve noticed quality-of-life improvements with the in-cab televisions.

“It is more enjoyable to be on the road now … You don’t have to go into a crowded truck stop to watch any of the football games or fight over the different channels if there’s something you want to watch,” said Michael Parker, a driver for Paul Transportation.

A driver for Millis Transfer also noted the freedom of not having to rely on truck stops for entertainment.

“At a truck stop, there’s really not a lot to do,” Joseph Mullis said. But with satellite television in a cab’s living space, “once you grab a shower and relax it’s nice to get back there and tune the dish in.”

Drivers also point out attention to details such as accommodations for when they can’t watch programs in real time.

“They also have DVRs in them, which is nice. So if you’re on the road you can record your show and watch it on your next downtime,” Mullis said. “[Millis] is definitely a driver-friendly company, but that’s just one extra step they took to ensure it. That’s one of the reasons I’ve been here for 16 years.”

“Anything you can do to provide a better quality of life for an over-the-road truck driver or a regional truck driver … you should probably do it,” Paul Transportation’s Williams said.

That’s why his company is looking into equipping drivers with WiFi hotspots in tractors.

“That’s a big thing that employees bring up all the time: When is the company going to have WiFi in the trucks?” Millis Transfer’s Zeimet said. “That’s something we’ve been talking with Kenworth Trucks about, trying to install WiFi within the cab.”

Although some carriers equip cabs with WiFi, it isn’t yet a widespread practice throughout the industry. Part of the reason, according to some fleet managers, is that truck stops frequently provide WiFi options.

One catch for many drivers, though, is the cost of truck stop WiFi.

“It’s not exactly a cheap cost, but they do offer it,” Mullis said.

For example, drivers can purchase WiFi plans to use in the cab while on the properties of the “big three” truck stop chains — Love’s, Pilot Flying J and TravelCenters of America — although some offer free service inside the truck stop facility itself.

“Affordability varies by location and operator,” Neuman said. “Some, for example, have free service, others paid. Still others have free service for slow bandwidth and paid for high speed.” Some also allow drivers to cash in accumulated truck stop rewards points for WiFi minutes.

Internet reliability inside the trucks can be another drawback, including at trucking companies’ own facilities.

“We do have at most of our ­seven terminals decent WiFi … But a couple of terminals are out in the boonies and don’t get the best WiFi. That’s another reason we’re looking at [putting it in trucks] in the future,” Zeimet said.

“The upgraded speed and enhanced reliability of this new WiFi is a benefit to professional drivers, helping them stay connected to family and friends,” said Mike Rodgers, Pilot Flying J’s senior vice president of chief strat- egy and information officer.

In addition to the increasingly prevalent perk of in-cab satellite radio, WiFi and satellite TV are two of the top electronic amenities that carriers cite as having a solid return on investment.

“In one trip you could pay for the TV,” R.E. Garrison’s Nelson said. “It’s paying for itself in retention numbers.”

Carriers said the incentive of in-cab technology works because it differentiates them in a crowded field of trucking companies vying for drivers.

“We all buy our trucks from the same people, we all buy the same trailers, we all haul virtually the same freight. It’s doing that extra thing the other people aren’t doing” that makes the difference, Nelson said. “Drivers are so important, we’re trying to retain every one we can.”

A Practical Guide to Operating a Greener Class 8 Fleet