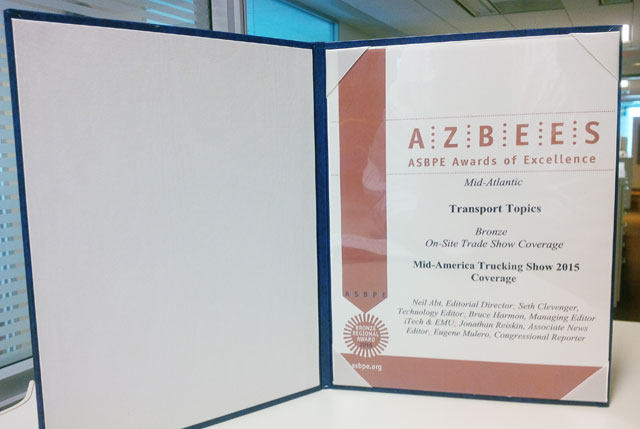 Transport Topics won an award from the American Society of Business Publication Editors for coverage in its print issues of the 2015 Mid-America Trucking Show.

Editorial Director Neil Abt accepted the award on behalf of the staff. Others named on the award were Technology Editor Seth Clevenger, Associate News Editor Jonathan Reiskin, Congressional Reporter Eugene Mulero and Bruce Harmon, now retired from TT but in 2015, he was the newspaper’s managing editor for magazines and features.

The MATS coverage was submitted as an example of providing readers with breaking business and government news from one of the industry’s most important annual events. More than 80,000 people attended the 2015 MATS show in Louisville, Kentucky.

The newspaper is also a finalist for a national award in the same category. Winners will be announced during ASBPE’s national meeting July 21-22 in St. Petersburg, Florida.