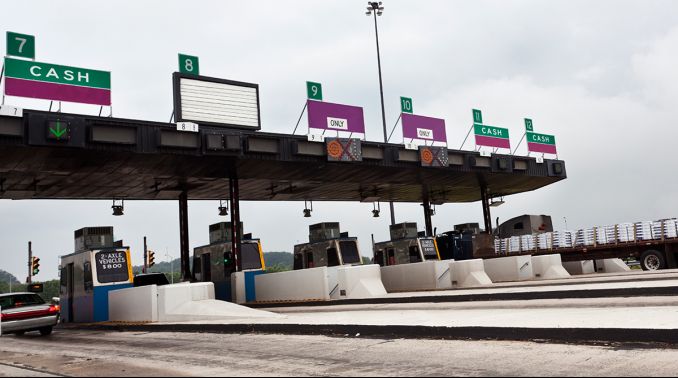 A toll plaza on the New Jersey Turnpike (Getty Images)

The proposal called for $1.5 trillion in infrastructure investments over 10 years.

Another pillar of the plan is to streamline the permitting process. And it calls for states to have flexibility to commercialize interstate rest areas, as well as eliminating constraints on public-private partnerships for transit projects.

The trucking industry, for the most part, rejected the potential for new tolls on interstates. Lifting or relaxing the federal ban on tolling interstate highways falls under Congress’ jurisdiction.

“Tolling restrictions foreclose what might otherwise serve as a major source of revenue for infrastructure investment,” according to the White House’s 55-page plan titled “Legislative Outline for Rebuilding Infrastructure in America.”

“Providing states flexibility to toll existing interstates would generate additional revenues for states to invest in surface transportation infrastructure. Current requirements that states must reinvest toll revenues in infrastructure would continue to apply,” the plan continued.

During a Feb. 14 meeting with congressional transportation leaders at the White House, President Donald Trump said: “After spending trillions of dollars overseas rebuilding other countries, it is time to rebuild our own country and to take care of our citizens.”

According to Sen. Tom Carper (D-Del.), a lawmaker at the meeting, Trump also endorsed a 25-cent increase to the federal fuel tax — currently 24.4 cents per gallon for diesel and 18.4 cents for gasoline.

“To my surprise, President Trump, today in our meeting, offered his support for raising the gas and diesel tax by 25 cents a gallon and dedicating that money to improve our roads, highways, and bridges,” Carper said.

The White House has not confirmed the remarks.

American Trucking Associations is open to a hike in fuel taxes, but said new tolling on existing interstates is “a nonstarter for our industry.”

“Tolls are ineffective and wasteful, with as much as 33% of revenue being wasted on administrative and overhead costs,” ATA President Chris Spear said.

“Because it is a user fee, the fuel tax is the most conservative, cost-effective and viable solution to making that vision a reality,” said Spear in a separate statement.

Are you willing to pay tolls on interstates to improve roads?

Transportation Secretary Elaine Chao defended the rationale behind tolling, as well as the possibility of advocating for a fuel tax increase. “So, everything is on the table,” the secretary said at the White House Feb. 13.

Fewer steps to obtain permits is key to the plan. A “one agency, one decision” environmental review structure would be established. The Council on Environmental Quality would issue regulations meant to streamline the process of the National Environmental Policy Act.

“Requiring CEQ to revise its regulations to streamline NEPA would reduce the time and costs associated with the NEPA process and would increase efficiency, predictability and transparency in environmental reviews,” according to the proposal.

The leaders of the Republican-led chambers stopped short of endorsing the proposal, and did not say when they would legislate on infrastructure.

“Through this guidance and letting Congress have the opportunity to write bipartisan legislation, President Trump has offered us direction to meet infrastructure needs in our nation’s states, cities and rural communities,” said Commerce Committee Chairman John Thune (R-S.D.). His panel oversees trucking policy.

“An infrastructure bill needs to be bipartisan and it needs to deal with real revenues to pay for fiscally responsible, long-term investments in our nation,” added Rep. Bill Shuster (R-Pa.), chairman of the Transportation and Infrastructure Committee. “Congress must address the long-term sustainability of the Highway Trust Fund and explore how we can broaden the pool of revenue and identify new sources for investment.”

Democrats, meanwhile, dismissed any reliance on nonfederal partners. The proposal would lead to “‘Trump tolls’ all over the country,” said Senate Minority Leader Chuck Schumer (D-N.Y.)

.@realDonaldTrump's proposal would do very little to make our ailing infrastructure better, but would put unsustainable burdens on our local government & lead to #TrumpTolls all over the country, all while undermining important protections like #BuyAmerica. — Chuck Schumer (@SenSchumer) February 12, 2018

Stakeholders, ranging from the U.S. Chamber of Commerce to the American Society of Civil Engineers to NATSO, the group representing America’s truck stops and travel plazas, are urging lawmakers to approve a higher fuel tax.

“Why would anyone fail to support an increase in the fuel tax and, at the same time, work to create another type of tax (such as toll roads) that costs more to collect than the fuel tax?” NATSO CEO Lisa Mullings said.