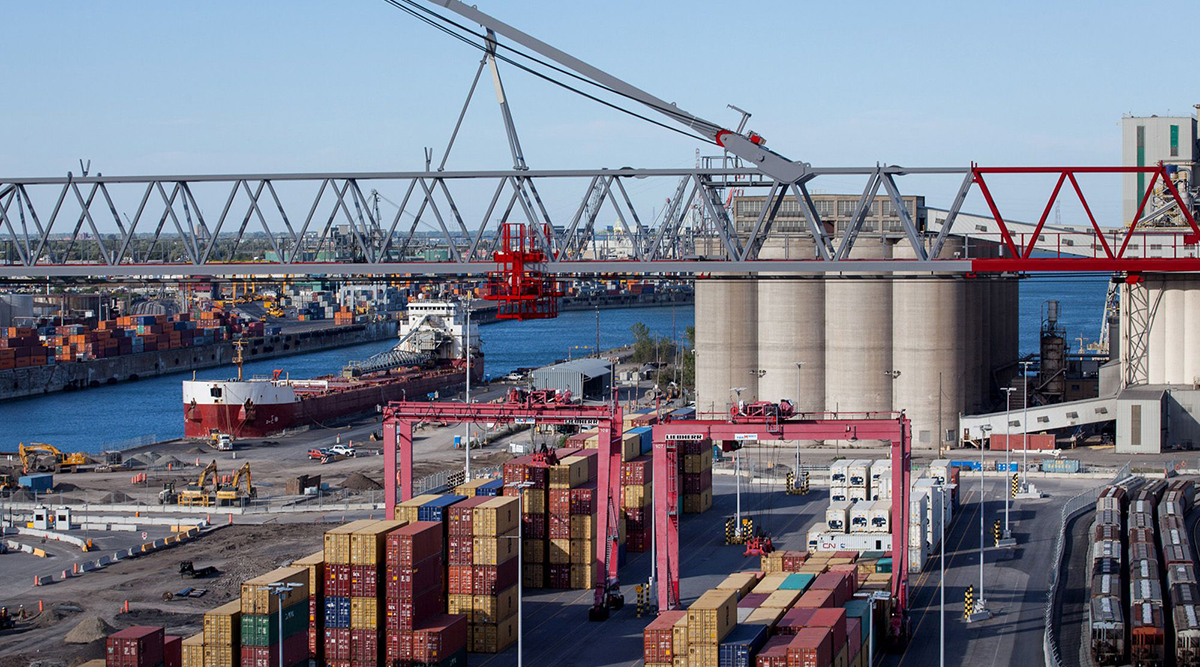 Shipping containers sit stacked at the Viau terminal in the Port of Montreal. (Valerian Mazataud/Bloomberg News)

Canada is planning legislation to end a general strike at the Port of Montreal that’s bound to worsen congestion at other sites and add to global shipping delays.

Prime Minister Justin Trudeau’s government said April 25 it would introduce a bill to force dockworkers to return to their posts, calling it the least favorite option. A general strike at eastern Canada’s biggest port started April 26, escalating from a partial walkout previously in effect and affecting most terminals.

“We’re here to encourage negotiations, but we can’t accept massive economic damages for Quebecers or Canadians,” Trudeau said in an interview with the Canadian Broadcasting Corp.’s French-language TV channel April 25. Some companies are seeking alternatives at U.S. ports “because Montreal is not reliable, from their perspective.”

The strike is the latest development in prolonged and unsuccessful negotiations for a collective agreement between the dockworkers and their employers. Business groups and Quebec’s government have been urging Trudeau to intervene, saying the protest is hurting the economic recovery from the pandemic.

On April 25, the Port of Montreal said clients should expect delays in deliveries “for the next few days and even weeks.” A strike last summer resulted in 20 vessels diverted to other ports, “a trend that certain shipping lines began in recent months given the uncertainty associated with the labor dispute,” the port said.

The global shipping industry has already been grappling with high costs and long waits because of virus-related procedures at ports and rising demand for imported goods from online shoppers working from home. Many small- and medium-sized businesses rely on shipments that pass through Montreal, which feeds into Canada’s most populated regions and where dockworkers handled 1.6 million containers holding 35 million metric tons of goods and commodities last year.

Trudeau’s government has been reluctant to use its legislative power over labor conflicts. In 2018, it intervened to end more than a month of rotating postal strikes.

The upcoming bill is set to affect talks that were to resume the morning of April 26, according to Michel Murray, spokesman for the union that represents Montreal longshoremen. Disagreements include shift schedules and demands for a better work-life balance.

“I have zero expectation” from the negotiations, Murray told Radio Canada before the meeting. “With the threat of a special law, it’s going to be a walk in the park for the employer.”