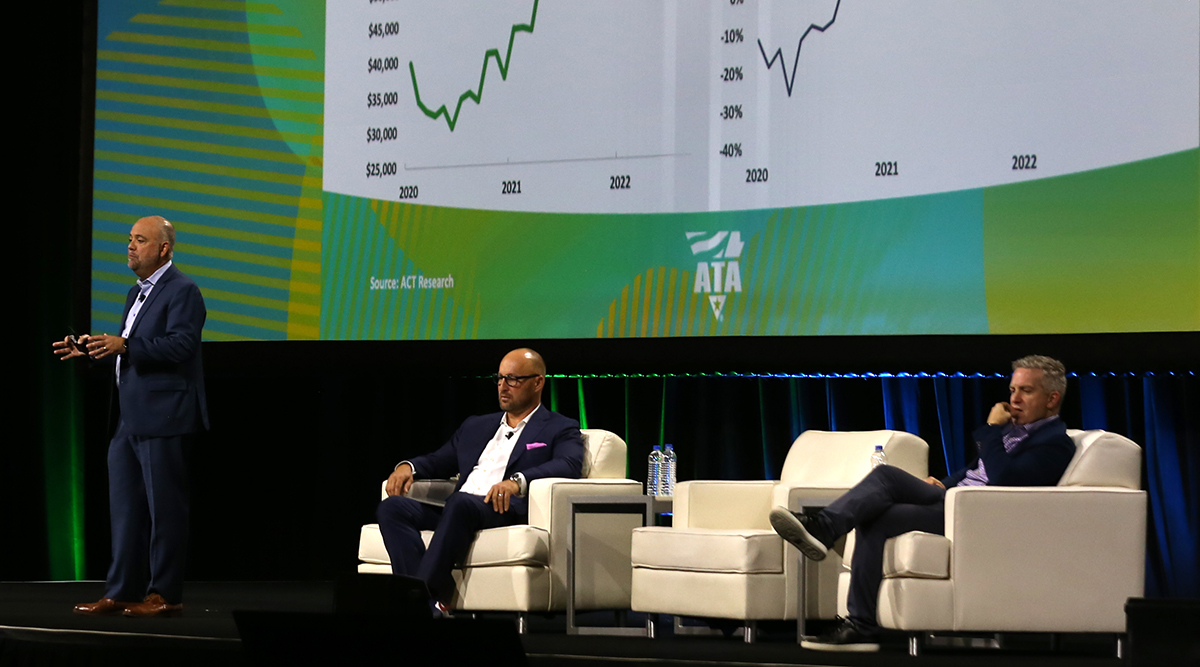 Costello shared his thoughts during a panel discussion at ATA’s Management Conference & Exhibition. The freight market has been very active over the last couple of years, and freight demand is still high even as recession concerns mount.

“I think that we’re going to have a mild recession early next year,” Costello said. “The U.S. is sort of the best house on a bad block. And so, we’re probably going to be able to weather it a little bit better. But there’s some really unique things going on in our industry that is going to at least isolate much of us in this room from having anything too difficult.”

Costello pointed out that there was a significant shift in spending away from services and towards goods starting in 2020. This was due to the coronavirus pandemic discouraging travel and going out. The trend helped drive the increase in freight demand. But now the economy is transitioning back to normal spending on services versus goods.

Costello added that this trend fits into the idea of there being a mild recession around the corner. But even though spending is down, he noted, it will still be the second-highest figure ever going back to when the measure started in 2002. 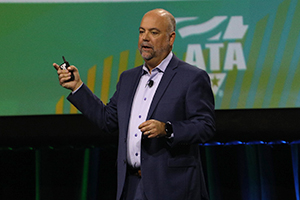 Costello said the industry has had challenges meeting demand in part because of the difficulty of buying new trucks. (John Sommers II for Transport Topics)

“I’ve been hearing folks talk about how the market is collapsing,” Costello said. “Let’s go back to 2020 and 2021. What happened to many of you in this room, contract carriers. Your shippers came to you and they said, ‘I’ve got more freight for you,’ and what did you say? You can’t haul it. I don’t have the trucks, I don’t have the drivers. And so, what were they forced to do? They went into the spot market to get all those loads covered and we saw an incredible increase in spot market load postings.”

Costello added the spot market load postings went up over 100%. But now as things are slowing down a bit, load postings this year fell 65%. But at the same time the contract market has bounced back after come contraction the last two years.

“I do think it’ll probably level off a bit or not grow as quick, but by no means has the freight market collapsed on us,” Costello said. “The spot market has because we’re just going back to more normal splits of contract versus spot market.”

Costello added that these trends have not been across the board for all modes. Tank truck has been making gains after struggling a bit. Dedicated dry van is still very strong. He suspects that is because some carriers have been converting irregular routes to dedicated because it’s better for their drivers.

“I would call it a bifurcated truck market right now,” Costello said. “So, contract is not bad but spot market is a struggle. If we look at some average revenue per mile on the for-hire truckload side, things are pretty good. It’s up almost 14% last year.”

Costello did clarify that average revenue per mile on the for-hire truckload side is decelerating, but nowhere near as intensely as what is happening on the spot market side. He noted that less-than-truckload is a little different because that segment also received surplus freight that spilled over from truckload over the last couple of years. But now that is backing off as the market normalizes.

“Let’s talk about supply because a lot of things have gone on,” Costello said. “When I said this is unlike a market that we’ve ever seen before, it’s this. So, what does this industry almost always do during good times? They go buy a bunch of trucks. We’ve seen it time, after time, after time. What could this industry not do this time? Buy a bunch of trucks. And I think that is what makes a big difference.”

Costello noted that when looking at both contract and spot the best year for freight volumes was 2021. But for-hire truckload carriers overall saw their truck counts shrink because they were unable to get new trucks and because of their leased independent truck drivers going into the spot market. But this year there have been signs there has been a slight increase in truck counts.