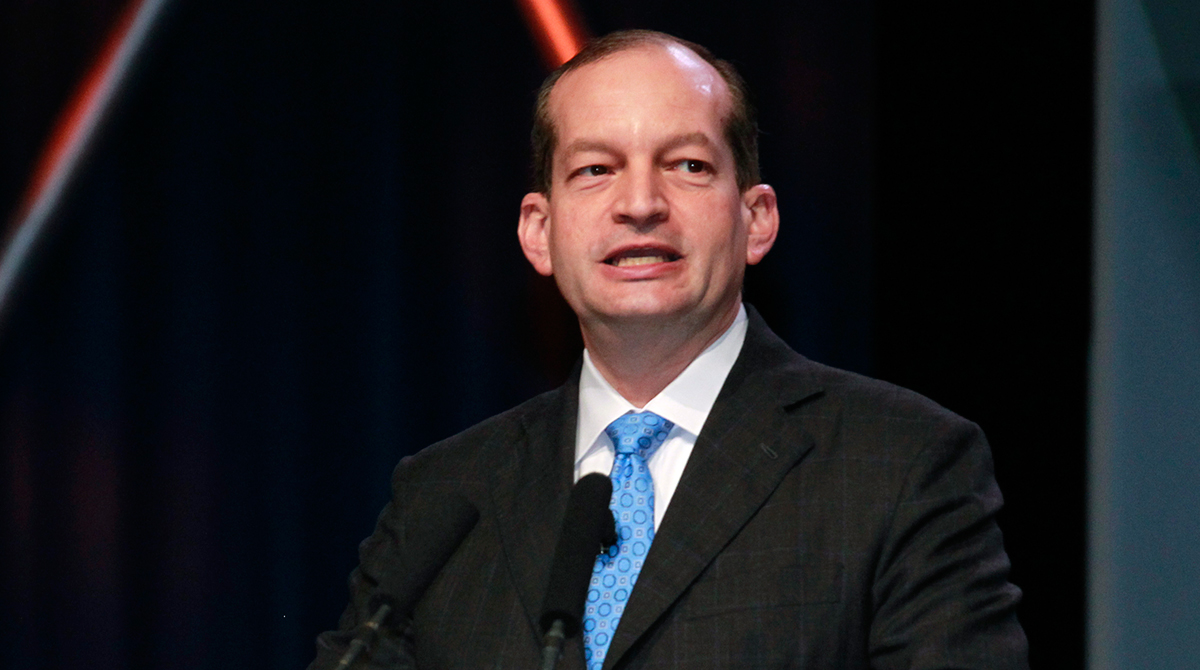 ORLANDO, Fla. — The trucking industry can play a major role in creating quality apprenticeship programs that could teach the skills needed to put some of the nation’s nearly 7 million job seekers to work, U.S. Labor Secretary Alexander Acosta said.

“Previous administrations have promoted apprenticeships, but here’s a critical difference under President Trump’s initiative: We will not micromanage the apprenticeships from Washington,” Acosta said.

He added, “You are in the best position to define what your industry needs, and react to those needs. The bureaucratic barriers that stood between the trucking industry and effective apprenticeship programs are ready to come down.”

Acosta lauded truckers for aiding people during the storms in Houston and Florida.

“This is America at its best — everyday men and women working hard to help fellow Americans during a time of need. Your industry should be proud of what it did during the storms,” Acosta said.

He added, “President Trump got it right when he spoke to truckers earlier this month in Pennsylvania. Nothing gets done in America without the hardworking men and women of the trucking industry.”

Acosta, stumping for the administration, said that Americans in recent years have endured high taxes, making it harder to invest in growth; red tape that creates countless hours of needless work and a shortage of skilled workers that makes it harder to do business.

That is changing with the new administration, he said.

“We’ve had a wonderful promising start,” Acosta said. “As you may be aware, one of the president’s top priorities is pretty darn simple — jobs, more jobs and even more jobs.”

He added, “Since January more than 1.1 million net new jobs have been created. Unemployment has dropped to 4.2%, the lowest in 16 years. GDP in the second quarter grew by 3.1%. The stock market has hit a high, and another high, and another high. Consumer sentiment is at a 13-year high. Inflation remains low at 1.7%.”

On Oct. 11, Trump chose an audience of truckers to champion his new “pro-growth” tax reform plan in Pennsylvania.

“When he wanted to let America know who benefits from tax reform, he made his initial pitch standing in front of trucks from your association,” Acosta said.

Acosta said the administration’s tax plan would simplify tax forms that would double the standard tax deduction that three of every four Americans use in filing their taxes.

The administration’s tax plan also would encourage investment in equipment that will in turn create jobs, Acosta said.

“When you buy a new truck, you’re going to need a new truck driver,” he said. “When you put a new forklift in your warehouse, you need a new operator.”

Acosta said that in transportation warehouses alone there are 247,000 job openings.

“Job creators want to hire, and Americans want to work,” he said.

“American companies have 6.1 million job openings today,” Acosta said. “That’s a record high, almost the highest level since we started keeping those statistics. Yet we’ve heard from governors, mayors, business leaders, and so many others that job seekers need different skills to fill these open jobs.”

How to Build Up Trucking's Workforce With Labor Secretary Marty Walsh