They made the announcements at the Mid-America Trucking Show, where the movement was launched from a flatbed trailer in 2014.

“It’s amazing to think so much has happened in that relatively short time,” said Elisabeth Barna, chief operating officer of American Trucking Associations.

For instance, TMAF has sold more than 149 of the moving billboards and is well on its way toward putting 200 trailer wraps on the road by the end of the year, Barna said.

“They paint a picture that the truck drivers are just like you and me: moms, dads, sisters and brothers, diminishing the notion of large trucks simply taking up space on the highways, and instead demonstrating the value that trucks deliver," Barna said.

A TMAF-wrapped truck from Jet Express was stationed in the main parking lot at MATS. 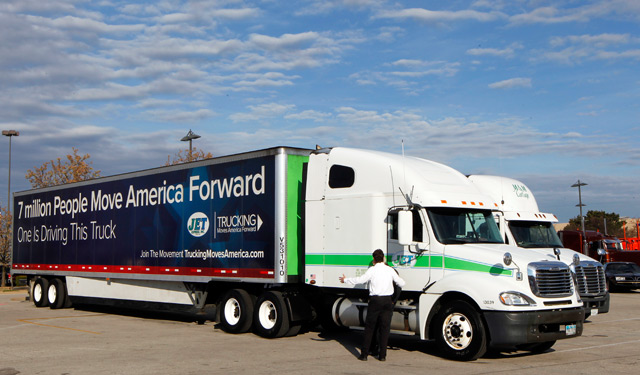 On March 23, another TMAF-wrapped truck was parked outside the Oval Office on the South Lawn of the White House, “a first for any of the trucking companies,” Barna said.

Another trailer on the grounds was wrapped in the American flag. Both were pulled by Share the Road tractors, one from Volvo Trucks North America and the other from Mack Trucks.

ATA was at the White House to discuss health care and other issues with the president, she said.

Also, “We were able to showcase what trucking is all about,” she said, as  America’s Road Team Captains and fleet owners were on hand, too.

Barna encouraged every fleet and driver to get a wrap for their trailers, especially since new 3-D designs and messages are available that show the variety of goods truck trailers carry.

The number of impressions generated by those wraps is now above 16 million, according to TMAF.

In addition, TMAF’s newsletter subscribers now number more than 3,000. It had 44 earned media stories, 16 op-eds placed in 2016, and sold 1,500 of its unique holiday ornaments that depicts a tractor and a wrapped trailer.

TMAF’s digital and social media efforts are growing, too, said Wendy Hamilton, senior manager of sales at Pilot Flying J, who like Barna is on TMAF’s executive committee.

Its Facebook followers number more than 12,000; Twitter followers are up to 2,900 and TMAF videos have been viewed more than 41,000 times on youtube.com.

It also added the blogging tool Medium to expand its reach.

“The folks that beat us were the Lincoln Mercury brand commercials. And the rest of the folks that were winning were big auto companies with probably quadruple the budget we had, so we are very excited about that,” Barna said.