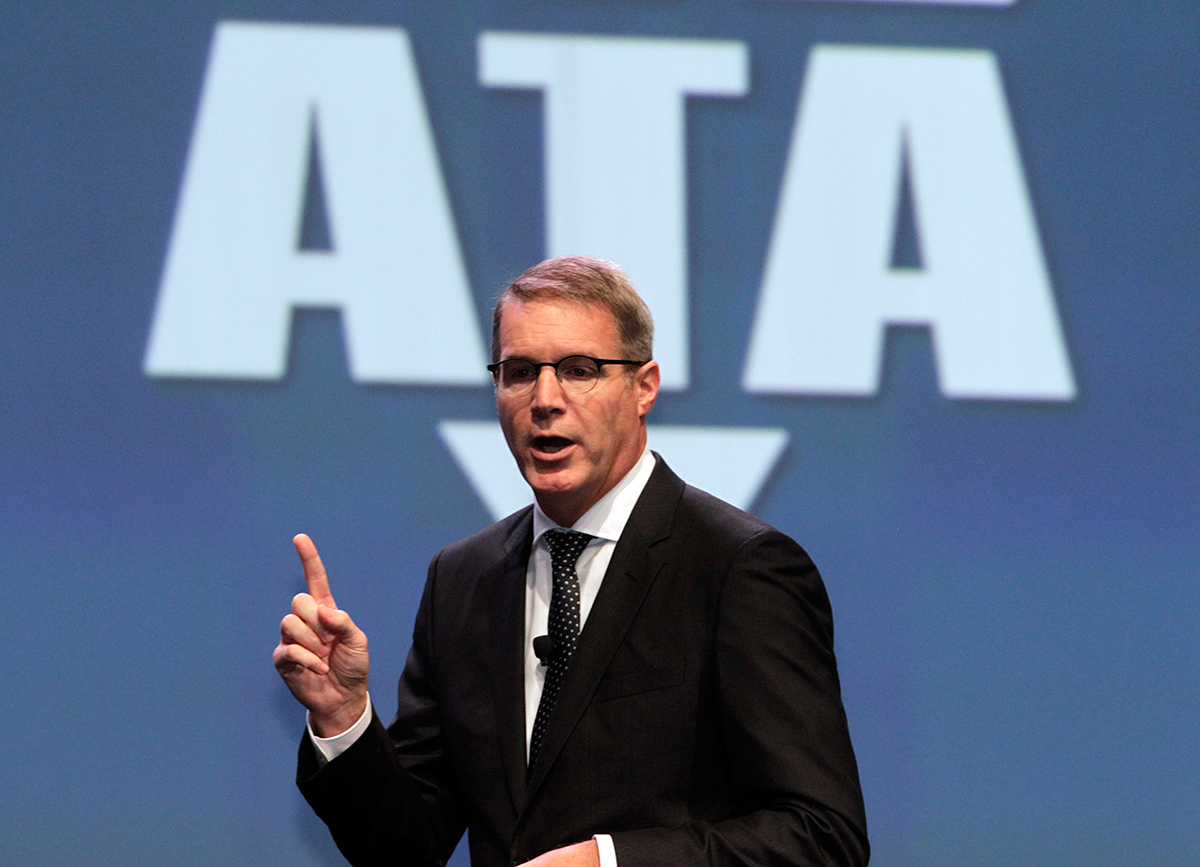 ORLANDO, Fla. ­— With the electronic logging device mandate fast approaching, the leader of American Trucking Associations emphasized that a delay will not occur, cementing the industry’s long-held view on the rule during his annual state of the industry address.

ATA is among the stakeholders prepared for the Dec. 18 mandate on ELDs, as smaller players in the industry continue to advocate for a delay that many have acknowledged is not coming.

“This issue has been legislated, promulgated and litigated. And it is now time to move forward,” ATA President Chris Spear said in his address to executives, business leaders and observers at the Management Conference & Exhibition. “ELD technology removes one’s ability to exceed the legal hours of service, ushering in a safe, efficient and fair playing field for the nation’s trucking industry.”

The mandate was advanced by Congress several years ago, and lawmakers have followed up with regulators at the Federal Motor Carrier Safety Administration on ways of finalizing the mandate, Spear reminded the audience. An ATA-led campaign helped garner momentum for the defeat of a recent attempt in the House to delay the mandate for two years.

The mandate is supported by FMCSA, transportation leaders on Capitol Hill and the Trump administration.

The rule requires carriers to equip trucks with ELDs as of Dec. 18. FMCSA officials have explained the mandate to drivers at events across the country for several months. Regulators participated at ATA’s conference here to address concerns.

Critics of the mandate claim the devices would be costly, encroach on their privacy and contribute to a barrage of regulation.

Turning his attention to the industry’s years-long driver shortage concern, Spear noted that within the next 10 years employers will have to hire about 1 million drivers and technicians to meet economic demands. He cited a new American Transportation Research Institute report that ranked the driver shortage as the industry’s top priority for the year.

“We need interstate recognition of credentials, entry-level training standards for veterans and nonveteran employees, solutions for the impact of detention time and congestion on driver’s hours of service and more,” Spear said.

Apprenticeships, training programs and recruiting and retaining personnel in the 18- to 21-year-old demographic would benefit the industry as it struggles to hire younger drivers.

Spear noted the secretaries of labor and transportation, both of whom participated in ATA’s annual conference, are working with the federation to “responsibly recruit, hire, train and retain talent.” Also, ATA Secretary John Smith, chairman of CRST International, will become the chairman of a member-led workforce development subcommittee.

“Henry Ford once said, ‘The only thing worse than training your employees and seeing them leave is not training them and having them stay,’ ” Spear said. “John’s leadership and this subcommittee will enable ATA to work closely with this administration, Congress and state governments to solve this problem.”

Spear also pledged to find a legislative vehicle for a provision that would ensure nationwide uniformity on meal and rest break rules for truckers. A pre-emption provision would clarify a requirement in a 1994 aviation law called F4A to block a California law signed in 2011. That law requires employers to provide a “duty-free” 30-minute meal break for employees who work more than five hours a day, as well as a second “duty-free” 30-minute meal break for those who work more than 10 hours a day.

"ATA and its coalition partners are looking to continue this winning streak by sending a strong message to policy makers in Sacramento," Spear said. "This is not the United States of California."