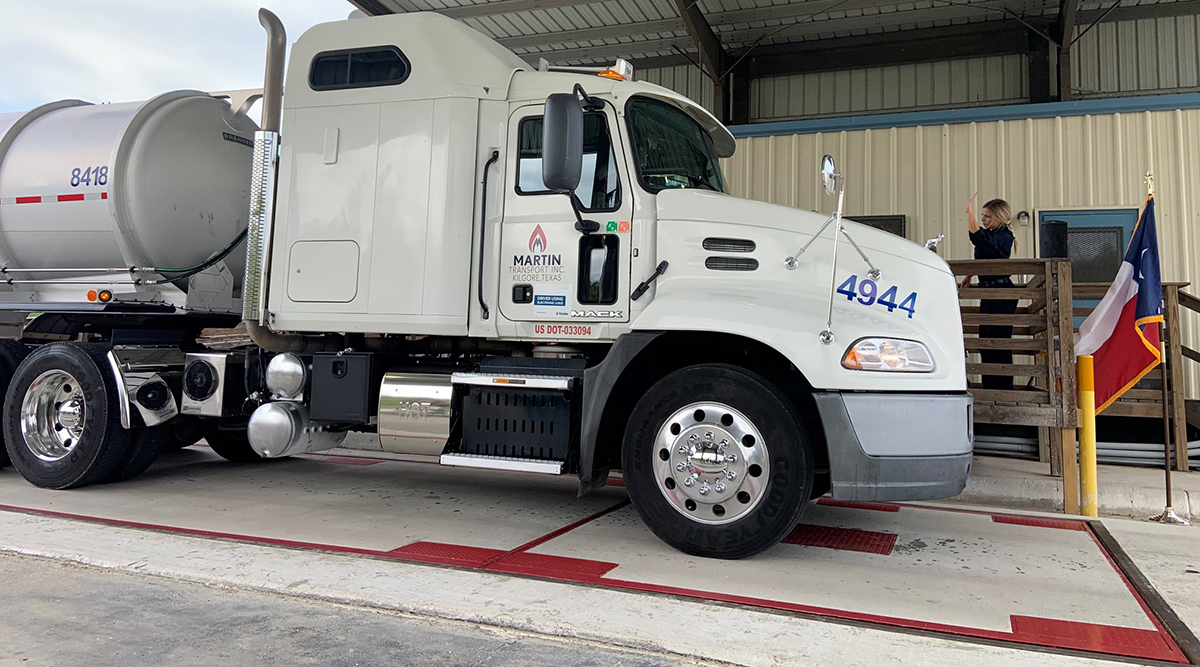 The inspection station includes a platform scale spanning 90 feet that allows inspectors to weigh an entire truck at once. (Texas Department of Public Safety via Facebook)

The Texas Department of Public Safety has opened a technologically advanced truck inspection facility in Seguin, which straddles Interstate 10.

Located 36 miles east of San Antonio, Seguin is home to facilities for companies such as Caterpillar Inc. and Niagara Bottling. I-10 is a major corridor that stretches across the southern U.S. from Santa Monica, Calif., to Jacksonville, Fla.

Designed by the Texas Department of Transportation, the Seguin Inspection Facility is located on the eastbound side of I-10. The facility includes an awning that can accommodate four lanes of truck traffic.

DPS dedicates the new Seguin Inspection Facility in Guadalupe County. It’s the most state-of-the-art inspection facility in Texas and includes a 90-foot platform scale which allows inspectors to weigh an entire truck at once. pic.twitter.com/rRWsAJjPx7

“This one-of-a-kind facility will benefit the trucking industry throughout the state of Texas and beyond, and promote safety for everyone on the roadway,” TxDPS Director Steven McCraw said.

The inspection facility represents $1 million in technological investment, including weigh-in-motion sensors and over-height detectors, as well as a hazardous materials placard and carrier identification sensors. These devices are meant to provide immediate information as to whether a vehicle is in compliance with the law. The sensors are linked to a computer database that identifies credentialing and violation history and whether the vehicle is under a federal out-of-service order. Trucks that pass the initial screening can continue on their way, while those with potential safety violations are pulled over for further inspection. 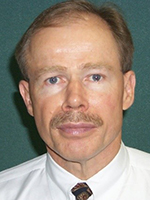 “The weigh-in-motion component is typically used for sorting overweight vehicles from legal vehicles,” Dan Middleton, research engineer at the Texas A&M Transportation Institute, told Transport Topics. “If their credentials are in order and if the weight’s within prescribed limits, then many times the truck will be allowed to keep moving and not move into a facility like this. Those [sensors] facilitate the truck keeping moving. Time is money, as they always say.”

The facility also is equipped with a thermal imaging device that examines a truck’s wheels and brakes for abnormalities. Greg Seidenberger, Precinct 1 commissioner for Guadalupe County, explained that the thermal reader is meant to detect cold brakes, rather than hot ones. Seidenberger, who worked with TxDOT and TxDPS on the inspection facility, said he learned from an inspector that brakes will be cold if they’re not working properly. Guadalupe County encompasses Seguin.

Additionally, the facility has an inspection pit for troopers and enforcement officers to inspect brakes and other aspects of the undersides of trucks. A platform scale spanning 90 feet allows inspectors to weigh an entire truck at once. Seidenberger said the platform scale is an improvement from the single-axle scale that was used previously. With the single-axle system, the truck operator had to move back and forth so each axle could be weighed individually. An inspection official then added up each axle’s weight to form a total. 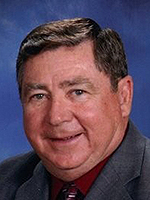 “[The platform scale is] a state-of-the-art scale,” Seidenberger told TT. “It weighs the whole truck at one time. It prints out everything, each axle and the total weight. It eliminates that human pushing a pencil.”

Seidenberger said the facility’s goal is to ensure safety without impeding commerce. He said preparation for the facility involved meetings with engineering experts, as well as trips to look at other facilities and speak with the officials stationed there.

“The whole bottom line was to improve safety for motorists on Texas highways,” Seidenberger said. “It’s not trying to be prejudiced against truckers. It’s trying to enforce the rules that are in place.” 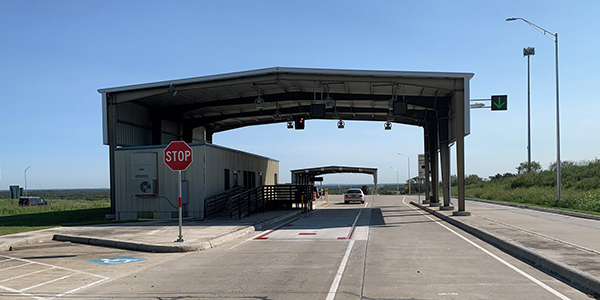 The inspection facility represents $1 million in technological investment, including weigh-in-motion sensors and over-height detectors, as well as a hazardous materials placard and carrier identification sensors. (Texas Department of Public Safety)

Middleton said I-10 is important from “the east-west freight perspective.” I-10 serves as a link connecting the ports in Los Angeles and Long Beach to the Port of Houston, which is about 170 miles east of Seguin. More than 247 million tons of cargo move through Port of Houston facilities each year. Top containerized export commodities include plastics, chemicals, automotive materials and electronics.

José Weissmann, a professor within the University of Texas at San Antonio’s Department of Civil and Environmental Engineering, said he’s observed I-10 as a user during his many trips from San Antonio to Houston.