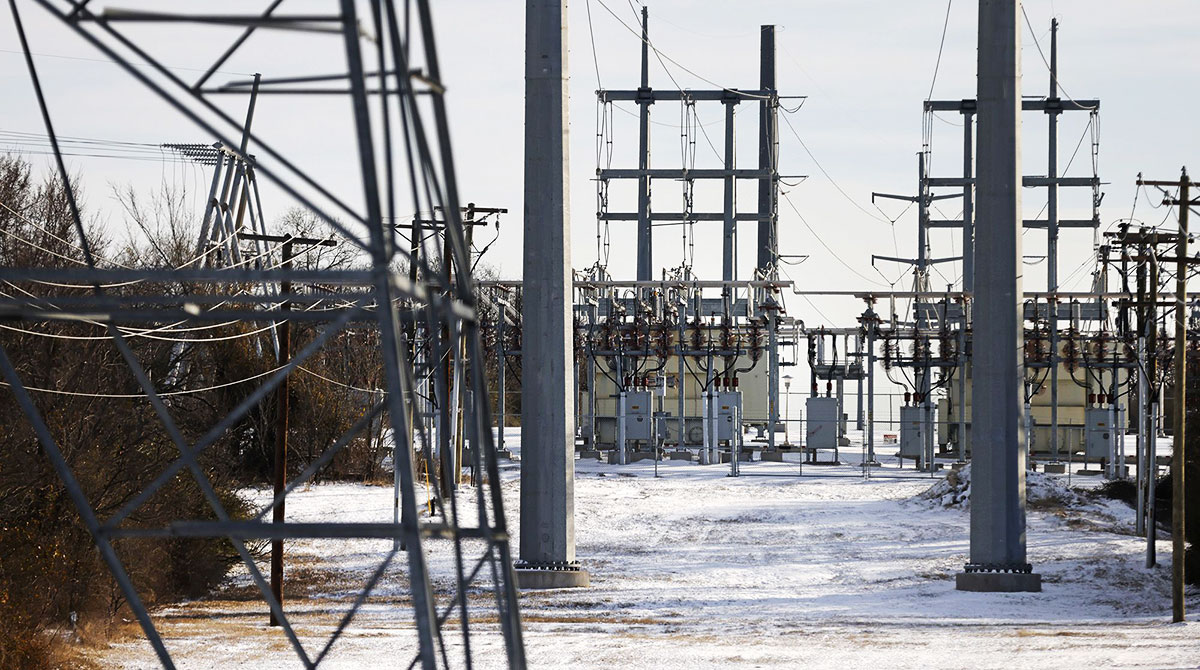 Transmission towers and power lines lead to a substation after a snow storm on February 16, 2021 in Fort Worth, Texas. (Ron Jenkins/Getty)

Power grids from Texas to the Midwest are at risk of blackouts if a prolonged deep freeze sets in this winter, regulators warned Nov. 18.

The main Texas grid could see a power shortfall of 37% in extreme conditions, the North American Electric Reliability Corp. said in a report, suggesting that the state isn’t prepared for another cold snap like the one that crippled its grid last winter. Two nearby electricity systems may also face tight supplies, according to the report.

The unprecedented warning comes after the Texas grid buckled during a cold blast in February, leaving millions in the dark, killing more than 210 people and resulting in at least $20 billion in damages. Plunging gas production was one of the leading causes of gas-plant outages in Texas, according to a report by regulators released earlier this week. Extreme weather driven by climate change is testing power networks like never before, quickly turning ample supplies into shortages. 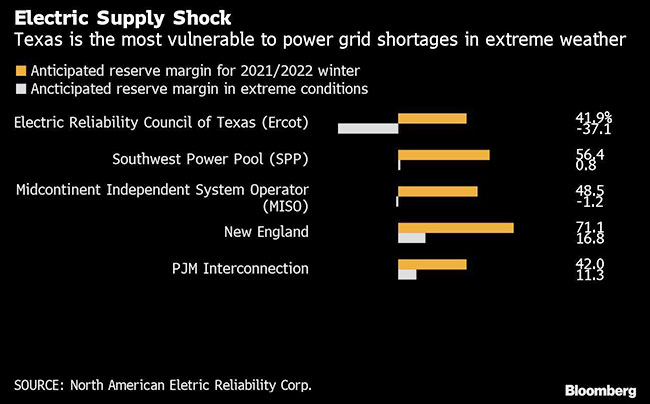 Widespread outages in Texas remain a “valid” concern, John Moura, director of reliability assessment and performance analysis at NERC, said in a media briefing Nov. 18. “The industry has done a tremendous amount of what they can, but there is still work to be done to make sure they are resilient to these weather patterns. It’s going to take more than one year to build that.”

While grids across the country are expected to have adequate supplies under normal weather conditions, fossil fuel generators may nevertheless face fuel shortages due to supply chain constraints, according to the Nov. 18 report. New England and the U.S. Southwest, including California, are particularly vulnerable to natural gas shortfalls.

In August, NERC sent a survey to grid operators and generator owners about their winterization plans and efforts to ensure fuel supplies. Results indicated that some plants are anticipated to be vulnerable this winter, including more than 3,000 megawatts of generation on the Texas grid and about 6,500 megawatts in the Midwest.

Some generators have informed NERC that they aren’t expecting additional coal deliveries for the rest of this year due to rail constraints.

This year’s assessment is the first to look at how resilient grids are to extreme events, Moura said. In the past, NERC measured reliability based on how much capacity was available, including extra reserves.

In recent years, 70 gigawatts of baseload generation has permanently shut down and is being replaced with more and more variable wind and solar power that depends on the weather, he said. “Extreme weather exacerbates the challenges of that transforming grid.”