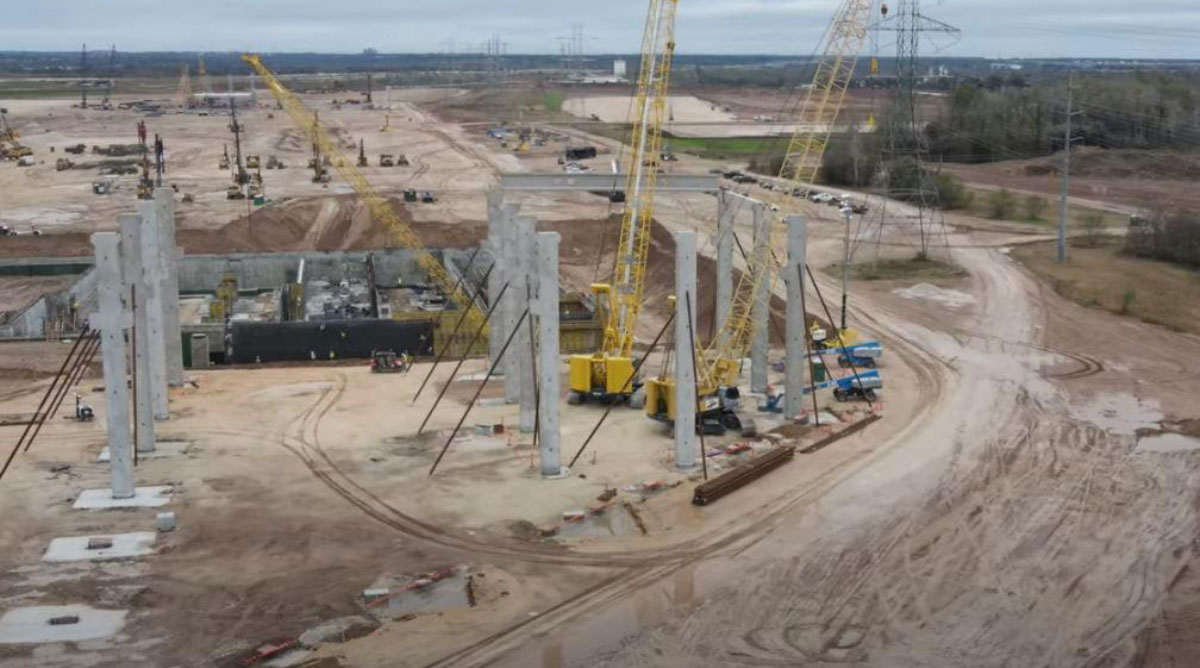 The construction site of Tesla's Texas factory is seen via drone on Nov. 29. (Courtesy of Joe Tegtmeyer/Austin American-Statesman)

Construction of the planned Tesla factory in southeastern Travis County, Texas, has been proceeding so fast that watching it take shape is practically a spectator sport.

Here are five things to know about the facility.

1. Tesla appears intent on producing more than cars there

The company has said it will manufacture many of its electric vehicles at the factory, but it has filed for a permit from the state to produce batteries as well. That would make the facility among the first Tesla locations to have both full-scale battery and vehicle production.

Tesla, which is based in California, hasn’t publicly confirmed the battery operation, but it filed an air-quality permit application with the Texas Commission on Environmental Quality.

“The facility is proposing to operate a cell-manufacturing unit to produce the battery packs that are installed in the vehicle. The final product from this operation are the cells,” the application says.

The new manufacturing plant will be a key site for Tesla as it attempts to break into the U.S. market for pickups now dominated by Ford, General Motors and Fiat Chrysler, the so-called Big Three automakers.

The factory, just outside Austin, will be the launching point for Tesla’s electric pickup — which it is calling the Cybertruck because of the vehicle’s unconventional, sci-fi appearance.

Tesla also has said the plant will serve demand in the eastern and central portions of the country for its Model 3 compact sedan and for its recently introduced Model Y compact sport utility vehicle. In addition, it will produce Tesla’s planned Class 8 Semi for longhaul shipping.

The new manufacturing plant will be just the company’s second in the United States and fourth in the world.

When Tesla executives sought taxpayer-funded incentives earlier this year to locate the factory in Travis County, they pledged to eventually employ a minimum of 5,000 people.

The company appears to have hit the ground running on that target, even though the factory remains a long way from operational. Dozens of jobs have been listed on Tesla’s corporate website for positions in Austin.

Rohan Patel, Tesla’s senior director of public policy and business development, said recently that the company also plans to forge partnerships with area high schools, colleges, workforce training agencies and trade groups as it builds its roster of employees in the region.

Travis County and the Del Valle school district helped lure Tesla here by approving tax breaks sought by Tesla that are valued at a minimum of about $60 million combined. 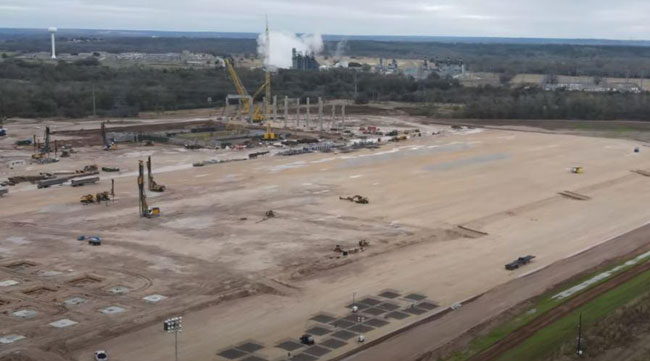 4. Next year, the first Texas-made Tesla vehicles could roll off the factory floor.

Tesla hasn’t provided an official public timeline for the project. But Elon Musk, the company’s maverick CEO, has said he hopes to have the factory running — and possibly turning out Cybertrucks — by late 2021.

In addition, Tesla documents dated from this summer peg May 1 as the date for “first substantial completion” of the plant. It’s unclear how soon after that milestone actual vehicle production will begin, however, and Tesla hasn’t said.

5. What else do Musk and Tesla have in store for the Austin area?

Battery production wasn’t publicly discussed when the prospect of a local Tesla factory first was raised, but now it appears to be a big part of the company’s plans.

In addition, another Musk-led business, a tunneling and infrastructure transportation firm called the Boring Co., recently hinted that Musk has additional efforts in the works in the area as well.

“Rumor has it that ‘Austin Chalk’ is geologically one of best soils for tunneling. Want to find out? Austin jobs now available,” the company said on its Twitter this month.

It’s unclear where and why the company would be planning to tunnel in the Austin area.

But Musk — himself an energetic, if cryptic, Twitter user — appears to have taken a liking to the region, meaning more surprises could be brewing.