Tesla Factory Injuries Idled Workers Three Times as Much in 2018 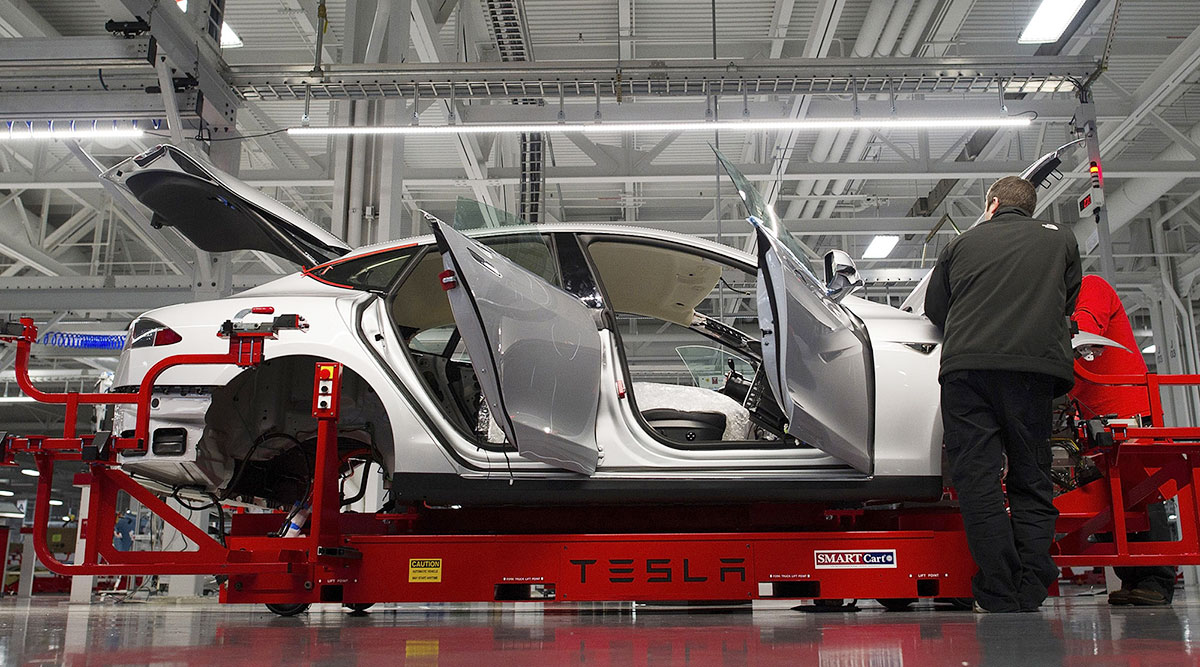 Tesla Inc. factory employees spent almost three times as many days off the job because of work-related injuries and illness in 2018 as the year before, an indication of just how much strain they were under as they manufactured electric cars at scale for the first time.

Staff at Tesla’s lone assembly plant in Fremont, Calif., logged 22,454 days lost in 2018, up from 7,619 in 2017, according to a report the company submitted to the Occupational Safety and Health Administration. This surge outpaced increases in hours worked, total injuries and number of cases in which injuries caused employees to be absent.

When taking headcount growth into account, the amount of time away per worker doubled last year. The overall rate of injuries per hour of work remained roughly the same as in 2017.

The sharp increase in the number of days away from work suggests a greater severity of injuries, said Deborah Berkowitz, who served as OSHA’s chief of staff under President Barack Obama and called the data “alarming.” The rise in the average time missed — to 66 work days in 2018 from 35 the year before — is a “red flag,” she said. 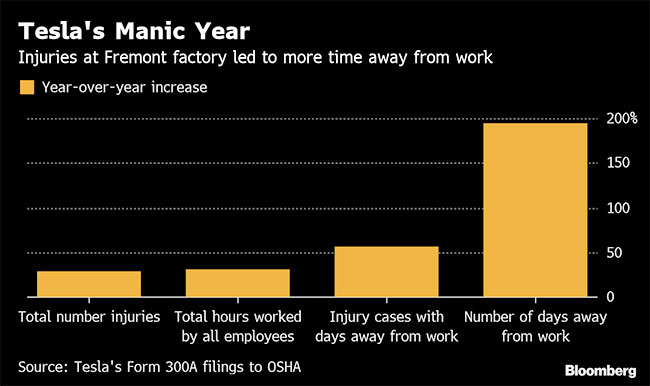 Tesla disputes this conclusion, saying there’s no correlation between the number of days employees are out of work and the severity of injuries. The report shows the company managed to boost production while keeping the number of injuries roughly in proportion with the rise in total hours worked, Laurie Shelby, Tesla’s vice president for environmental health and safety, said in a phone interview. There were no fatalities at the factory either year.

“The most important metric is fatalities, and our number is zero,” Shelby said. “It was a big ramp year for Model 3, so there were a lot more hours worked, more production staff and more potential for incidents. We really focused on making sure we had our safety team out in the area as we ramped.”

Tesla arranged for Richard Fairfax, a former OSHA official who advises companies including the electric-car maker and visited the Fremont plant last summer, to send a statement vouching for workplace practices.

“Considering what a young company Tesla is, acknowledging all the regulatory and media scrutiny they are under and comparing their current program with the program that was in place three years ago in my mind shows an impressive level of improvement in such a short time period,” Fairfax said.

Other safety advocates are less impressed. Tesla’s reported spike in missed days is “a pretty dramatic trend,” said Peter Dooley, a consultant for the National Council for Occupational Safety and Health. “That’s an indicator of real serious problems,” said Dooley, who coordinated educational programs for the United Auto Workers international union, which has more recently been trying to organize the Fremont factory.

Remember when @elonmusk claimed that Cal/OSHA looked into Tesla underreporting injuries and found "that we had not been doing anything of the sort"?

Safety has long been a flashpoint between the company and its critics, with some current and former employees saying Musk prioritizes production goals over injury prevention, an allegation the company denies. Tesla is appealing several citations from California’s Division of Occupational Safety and Health, including a proposed $82,000 fine related to a subcontracted employee whose fingers were caught in a torque gun.

Musk keeps Tesla’s board apprised of injury rates, targets and safety activities, the company said in a report to the California Alternative Energy and Advanced Transportation Financing Authority for a meeting scheduled March 19. Tesla added 35 environmental, health and safety support staff in 2018; has spent $4.3 million since mid-2017 on ergonomic enhancements and has a team of industrial athletic coaches who specialize in “identifying early-warning signs of discomfort” and educating staff about preventing injury.

During Tesla’s annual meeting in June, Musk said while the company’s injury rate in 2017 was “a little bit above” industry average, it was better than average in the first months of 2018, and the company was aiming to reduce it to half the average.

On an earnings call last October, Musk said most of Tesla’s injuries were related to “muscle strain and getting scratched.” The company’s goal, he said, “unequivocally is to have the safest factories in the world, where people will look forward to coming to work in the morning.”