Technology Helps Fleets Find Lanes That Are Profitable and Efficient 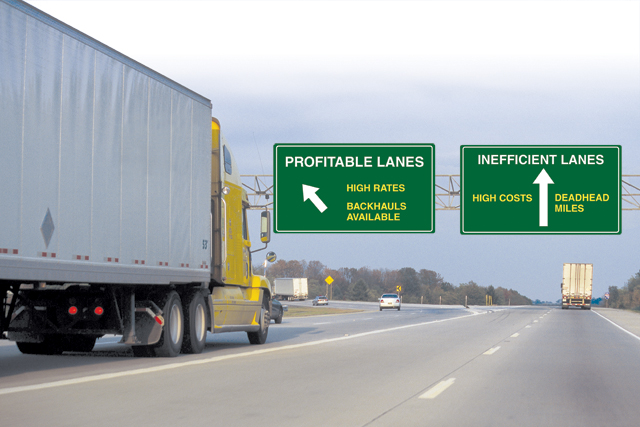 This story appears in the Jan. 11 print edition of iTECH, a supplement to Transport Topics.

As capacity tightens and government regulations make drivers’ time even more valuable, carriers and shippers are embracing technology to choose the most profitable and efficient shipping lanes, set rates and reduce empty miles.

That same technology can give carriers insight into lane density and a route’s market rate, which is compelling some carriers to direct capacity to underserved markets and capitalize on spot rates, fleet and technology executives said.

“There are markets that I’m very aware of opportunity in,” said James Winton, vice president of operations for Trimac Transportation, of Calgary, Alberta. Winton said he uses multiple sources to monitor the company’s historical rates and market trends. “We try to capitalize on that and make sure we tie the inbounds into that market so it is a win-win,” he said.

Trimac Transportation relies on technology from TMW Systems that allows carriers to examine their yield management, pricing and freight network design along with their historical reporting.

“They can see their activity by lane, geography, customer as well as freight flow information and timing,” said David McKinney, a vice president with Beachwood, Ohio-based TMW. He noted that carriers can also look at a customer’s contribution to the network and efficiency.

Trimac uses the technology to choose the specific routes from existing customers that fit best with their model.

“Most shippers, especially on big books of business, don’t put all of their eggs in one basket,” Winton said. “If you have multiple baskets, why not let the baskets decide what works best for them? You get a better rating and coverage.”

TMW’s truckload market rate index indicates the load-to-truck ratio by sharing the number of load movements and participating carriers for any given lane. It also provides pricing information, including the minimum, maximum and average pricing on a lane for van, reefer and flatbed freight.

Jody Farley, director of safety and operations for MinStar Transport, based in Eagan, Minnesota, also has turned to technology to help her select lanes.

“In the past, we’d bid on everything. This year, we really used our lane analysis to see the best lanes for us,” she said, adding that being selective has increased profits and service.

MinStar uses programs from McLeod Software, of Birmingham, Alabama, which offers lane analysis tools to help carriers understand their balance and profitability by lane. McLeod also provides average pricing information by lane by monitoring and scrubbing data from McLeod customers, which can give carriers market insight.

“With capacity as tight as it is, carriers have to make sure they’re running the right business,” said Ben Murphy, product manager for McLeod Software. “Carriers have to move their trucks off of those lanes to more profitable lanes.”

Reviewing historical data and the going rate in a lane can also help carriers identify when a rate increase is due.

“There are reasons for a carrier to be above or below the market price, and that comes down to density,” Murphy said.

David Abell, director of information technology for AM Transport, a freight broker based in Olney, Illinois, said knowing a competitor’s rate information provides peace of mind and offers a greater understanding of how density has changed how the carrier operates.

Lane density tends to drive rates on the spot market, and DAT Solutions, of Beaverton, Oregon, highlights areas where rates are high so carriers can get into the market.

“Finding backhauls is very common, but in certain markets and seasons, you’ll find that rates are higher than carriers could get for contracted freight,” said Michele Greene, DAT’s director of product management.

DAT’s RateView shows a market price on a lane and breaks it down by the price per mile and the price per trip, with or without fuel. Greene said companies can look at it to see the current spot rate and also can see demand to determine how difficult it will be to get a truck.

“The supply of available loads has a great impact on the price of loads going in that day,” Greene said, adding that freight moves to the spot market when there is an unexpected increase in freight, a lack of capacity or a disruption in the supply chain.

The reporting also shows longer waiting times on certain routes of which the company wasn’t aware.

“We changed our operational methodology and put drop trailers in place instead of having drivers waiting on-site,” he said.